Enjoy a seasonal twist on traditional sandwich bread with this yeasted pumpkin loaf.

Stella Parks
Editor Emeritus
Stella Parks is a CIA-trained baking nerd and pastry wizard, dubbed one of America's Best New Pastry Chefs by Food & Wine. She was the pastry editor at Serious Eats from 2016 to 2019.
Learn about Serious Eats' Editorial Process
(25)
0
In This Recipe

Why You Should Add Pumpkin Purée to Your Sandwich Loaf

Of course, the exact timing will vary depending on the size and power of a given machine, but I've tested the dough on several of our favorite food processors and found 75 seconds to be a reasonable average. Texture is more important than time.

This takes about 2 hours at 72°F (22°C), so keep a sharp eye on it in warmer environments, and take a more patient approach when it's cool. (Alternatively, you can set up a warmer environment for the dough; for example, I've found that microwaving a mug full of water until boiling creates a perfectly serviceable impromptu proof box, into which you can slide your bowl of dough.)

Shaping and Finishing the Loaf

Nestle the dough into a lightly greased 8-inch loaf pan (also known as a "one-pound loaf pan"), cover, and proof as before—until the dough is roughly doubled in bulk, or crowning at about 2 inches above the pan. This is a bit higher than you can expect from most recipes because I use a higher proportion of dough in order to achieve the sort of comically domed loaf you'd see in a cartoon.

Thanks to its natural color, and the sugar in the dough, the bread will brown nicely in the oven on its own, so there's no need to brush it with anything prior to baking. Just pop it in the oven and bake to an internal temperature of about 205°F (96°C), or until the loaf is well-risen, golden brown, and hollow-sounding when thumped. In an oven that runs true to dial, this will take about 45 minutes at 350°F (177°C), but the time can vary depending on the dough temperature, degree of proofing, and the loaf pan's specific size, shape, and material (as well as gauge), so keep a close eye on the loaf as it bakes.

For dinner rolls, make and proof the dough as directed, then divide into approximately 12 even pieces (approximately 2 1/2 ounces or 70g each). Cup each portion of dough beneath your hand and an unfloured work surface, pinning it with your fingertips on one side and the heel of your palm on the other. Roll the dough around in quick, circular motions until the dough forms a ball, then continue until the dough is pulled smooth in a tight skin, with only a tiny seam along the bottom. If the seam is large or irregular, continue rounding until the bottom is nearly smooth. Arrange portions in a 10-inch cast iron skillet, then cover, proof, and bake as directed, reducing the amount of time to approximately 35 minutes.

The loaf will keep up to a week at room temperature in a bread box or paper bag. 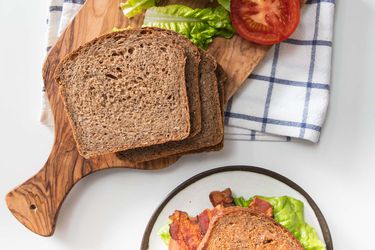 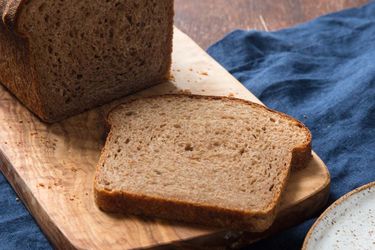