"The recipe for this desert treat is simple: Fresh Medjool dates are boiled then smashed and blended with vanilla ice cream."

Perhaps the oldest cultivated fruit in the world, the date palm thrives in the hot, dry Arizona climate. Date shakes have been served here since the 1920s, when the old U.S. Highway 80 ran through town.

The unincorporated community of Dateland—once a training ground for General Patton's troops—was purchased in 1995 by Roland and Charna Walker from Alberta, Canada. In addition to their world famous shakes, the tiny (but arguably the cleanest) rest stop in Arizona now sells date cookies, date ice cream and date cream pie.

On a recent, cool March morning, I heeded the billboards' calls and pulled off at exit 67. The recipe for this desert treat is simple: Fresh Medjool dates are boiled then smashed and blended with vanilla ice cream.

"they were nutty, almost cinnamon-like in taste, and golden brown"

Known as "the king of dates" (they were once reserved for royalty) Medjools are the largest and sweetest of the date family. And that sweetness makes for a naturally satisfying shake. As small chunks of the Medjools came up through the straw, their texture reminded me of shredded coconut, except they were nutty, almost cinnamon-like in taste, and golden brown, like the sands that stretch for miles around Dateland's nine-acre date palm grove.

Just behind me in line was a former Yuma resident who recalled family drives to Dateland decades ago for the cold, creamy shakes—a childhood treat on days when the mercury would soar well into the 100s.

Returning to Dateland for the first time in more than 30 years, Susan Hardman took a sip and looked disappointed: It didn't taste the same, she said. Perhaps date shakes are best enjoyed on hot summer days. Perhaps she, not the shake, had changed over the years.

For those who want to enjoy date shakes wherever they may be, the shop at Dateland sells jars of shake mix. But the cashier told me not to bother, as the mix unnecessarily adds sugar and lacks the date chunks of the freshly made shakes. 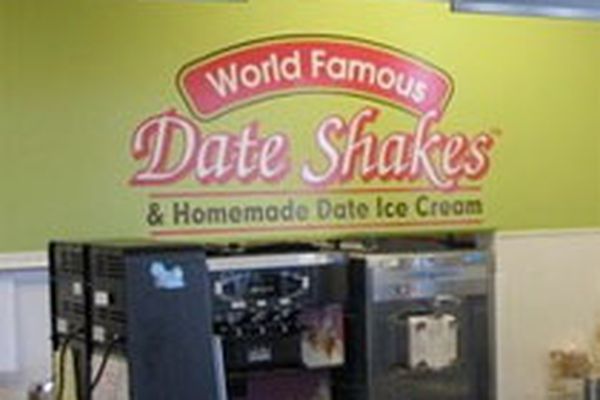