I'm about to touch the third rail of Southern food. Well, actually, one of the third rails of Southern food, for when it comes to defining how certain beloved dishes should or should not be made, Southerners can get downright touchy. But, sometimes a truth is so self-evident that you can't present an impartial case for both sides. So I'm just going to say it: sugar has no business in cornbread.

Neither, for that matter, does wheat flour. One might make something quite tasty with well-sweetened wheat flour mixed with cornmeal, but be honest with yourself and call it a dessert. Cornbread is something else.

Now for a less personal perspective.

Much of the sugar/no sugar debate comes down to how one's grandmother made cornbread (and my grandmother didn't let a speck of sugar enter her batter). There are plenty of otherwise perfectly normal Southerners (my wife, for instance) whose grandmothers put sugar in cornbread. And there's a good explanation for why they did it. It all comes down to the nature of modern cornmeal.

But, first, a word on cornbread and Southerness. A lot of corn is grown in places like Iowa and Illinois, and Americans in all parts of the country have long made breads, cakes, and muffins from cornmeal. But for some reason, cornbread itself is still associated primarily with the South.

"The North thinks it knows how to make cornbread, but this is gross superstition," Mark Twain wrote in his autobiography. When the Southern Foodways Alliance needed a title for their series of books collecting the best Southern food writing, they chose Cornbread Nation.

Cornbread's enduring role in Southern cookery comes from its ubiquity—it was the primary bread eaten in the region from the colonial days until well into the 20th century. Though farmers in the Northeast and Midwest cultivated thriving crops of wheat and rye, corn remained the staple grain of the south, as European wheat withered and died of rust in the region's heat and humidity.

"For all but the wealthiest Southerners, the daily bread was cornbread."

For all but the wealthiest Southerners, the daily bread was cornbread. "In the interior of the country," a New York Times correspondent observed in an 1853 article about Texas, "cornbread forms the staple article of diet—anything composed of wheat flour being about as scarce as ice-cream in Sahara." Biscuits made from wheat flour are very closely associated with the South, but for most Southerners they were rare treats reserved for special occasions like Sunday dinner.

The simplest type of cornbread was corn pone, which was made from a basic batter of cornmeal stirred with water and a little salt. It was typically cooked in a greased iron skillet or Dutch oven placed directly on hot coals. An iron lid was put on top and covered with a layer of embers, too, so the bread was heated from both bottom and top and baked within the pan.

Over time, the basic pone recipe was enhanced to become cornbread. Cooks first added buttermilk and a little baking soda to help it rise. Later, eggs and baking powder made their way into many recipes. But there are two ingredients you almost never see in any recipes before the 20th century: wheat flour and sugar.

In 1892, a Times correspondent, after enumerating the many types of corn-based breads eaten in Virginia, noted, "It will be observed that in none of them is sugar used. There are cornmeal puddings served with sweet sauces, but no Southern cook would risk the spoiling of her cornbreads by sweetening them."

So why were cooks so unanimous on the subject of sugar and wheat flour up through the 1930s and so divided on it today? That mention of Kentucky's lingering market for "water-ground" meal provides an important clue, for a huge shift occurred in the cornmeal market in the early part of the 20th century, one that changed the very nature of cornmeal and forced cooks to alter their cornbread recipes.

There's no better source to turn to to understand these changes than Glenn Roberts of Anson Mills in Columbia, South Carolina. In the 1990s, Roberts embarked on a single-minded mission to help rediscover and revive the rich variety of grains that were all but lost amid the industrialization of agriculture and food production. He's cultivated a network of farmers to grow heirloom corn, rice, and other grains, and he launched Anson Mills to mill them in traditional ways and distribute them to restaurant chefs and home cooks.

During the 19th century, Roberts says, toll milling was the way most farm families got the meal for their cornbread. Farmers took their own corn to the local mill and had it ground into enough cornmeal for their families, leaving behind some behind as a toll to pay the miller. "With toll milling, it was three bags in, three bags out," Roberts explains. "A person could walk or mule in with three bags, take three bags home, and still get chores done."

The mills were typically water-powered and used large millstones to grind the corn. Starting around 1900, however, new "roller mills" using cylindrical steel rollers began to be introduced in the South. Large milling companies set up roller operations in the towns and cities and began taking business away from the smaller toll mills out in the countryside. "The bottom line is they went off stone milling because the economies didn't make sense," Roberts says, "which is why stone milling collapsed after the Depression."

Unlike stone mills, steel roller mills eliminate much of the corn kernel, including the germ; doing so makes the corn shelf stable but also robs it of much flavor and nutrition. The friction of steel rolling generates a lot of heat, too, which further erodes corn's natural flavor. Perhaps the most significant difference, though, is the size of the resulting meal.

"If you're toll milling," Roberts says, "you're using one screen. It's just like a backdoor screen. If you put the grits onto that screen and shake it, coarse cornmeal is going to fall through. The diverse particle size in that cornmeal is stunning when compared to a [steel] roller mill."

When cornmeal's texture changed, cooks had to adjust their recipes. "There's a certain minimum particle size required to react with chemical leaven," Roberts says. "If you are using [meal from a roller mill] you're not going to get nearly the lift. You get a crumbly texture, and you need to augment the bread with wheat flour, or you're getting cake."

The change from stone to steel milling is likely what prompted cooks to start putting sugar in their cornbread, too. In the old days, Southerners typically ground their meal from varieties known as dent corn, so called because there's a dent in the top of each kernel. The corn was hard and dry when it was milled, since it had been "field ripened" by being left in the field and allowed to dry completely.

High-volume steel millers started using corn harvested unripe and dried with forced air, which had less sweetness and corny flavor than its field-ripened counterpart. "You put sugar in the cornmeal because you are not working with brix corn," Roberts says, using the trade term for sugar content. "There's no reason to add sugar if you have good corn."

By the end of the Depression, old fashioned stone-ground cornmeal and grits had all but disappeared from the South, replaced by paper bags of finely-ground corn powder. The new cornmeal tended to be yellow, while the meal used for cornbread in much of the coastal South traditionally had been white. (There is a whole complex set of issues associated with the color of cornmeal that will have to wait for a later time.)

Cooks who paid attention knew there was a difference. "A very different product from the yellow cornmeal of the North is this white water-ground meal of the South," wrote Dorothy Robinson in the Richmond Times Dispatch in 1952. "The two are not interchangeable in recipes. Most standard cookbooks, with the exception of a comparative few devoted to Southern cooking, have concerned themselves with yellow cornmeal recipes as if they did not know any other kind! They do not even distinguish between the two. They simply say, naively, 'a cup of cornmeal' when listing ingredients in a recipe."

But even those who knew the difference had trouble finding the old stone-ground stuff. In 1950, a desperate Mrs. Francine J. Parr of Houma, Louisiana, posted a notice in the Times-Picayune with the headline "Who's Got Coarse Grits?" and explained, "the only grits we can get is very fine and no better than mush. In short, I'm advertising for some grocer or other individual selling coarse grits to drop me a line."

Cornbread is just one of many traditional Southern foods that are difficult to experience today in their original form for the simple reason that today's ingredients just aren't the same. Buttermilk, rice, benne seeds, watermelons, and even the whole hogs put on barbecue pits: each has changed in fundamental ways over the course of the 20th century.

But, thanks to historically-minded millers like Glenn Roberts and others, it's getting a little bit easier to find real stone-ground cornmeal again. Some are even using heirloom varieties of dent corn to return the old flavor and sweetness to cornmeal and to grits, too.

The key to making good, authentic Southern cornbread is to use the right tools and ingredients. That means cooking it in a black cast iron skillet preheated in the oven so it's smoking hot when the batter hits the pan, causing the edges of the bread to brown. That batter should be made with the best buttermilk possible (real buttermilk if you can find it, which isn't easy).

And you shouldn't use a grain of wheat flour or sugar. If you start with an old fashioned stone-ground meal like the Anson Mills' Antebellum Coarse White Cornmeal, you'll have no need for such adulterations. 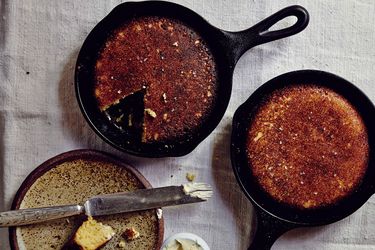 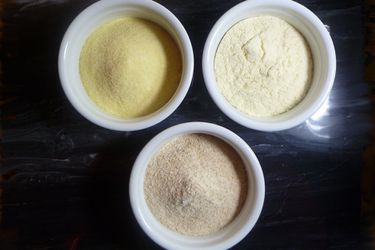 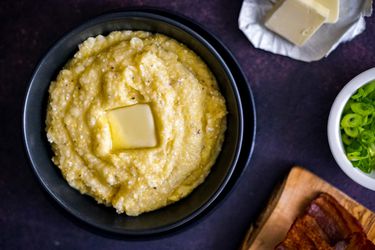