Some people don't understand babka. Is it a bread? Dessert? The sweet, swirly loaf, which has roots in Eastern Europe, is somewhere in between. Think of it as a cousin of coffee cake, if that helps. When are you supposed to eat it? The better question is when can't you eat babka? Something about the chocolate or cinnamon (we'll get to that) woven into the brioche-meets-cake loaf just hits the spot.

There are two traditional flavors: chocolate and cinnamon. Elaine Benes famously called cinnamon "the lesser babka" on an episode of Seinfeld, and Serious Eaters seem to agree. But since we were pretty split on our flavor loyalties at SEHQ, we included both in this tasting.

When forming a master list of the competing babkas (would the plural be babkae?) it became clear that most roads led back to one bakery in Williamsburg. Green's supplies the majority of the babka you see at markets and delis across the city, not to mention the country (including California, Texas, and beyond). Though some places get rid of their packaging, faking it as their own in-house creation, odds are it's from Green's.

As the leader of the babka market, Green's churns out roughly 2,000 loaves of babka a day (except Saturday). Chocolate is the bigger seller, no contest. But their cinnamon—as moist as the best cinnamon roll, but with thinner, more delicate layers—would make Elaine rethink her "lesser" comment.

"Babka is the next doughnut" said Juda Ackerman, one of the partners in the 25-year-old Green family business (they work in a tiny office space attached the kosher bakery). Though they also bake trays of hamentashen and rugelach to ship all over the country, babka is the biggie here. "Pretty soon you might see us in more coffee shops, not just grocery stores."

But you may not always know it's them. At Katz's for example, it's wrapped in a personalized orange package. Russ & Daughters sells it by the slice or the loaf, replacing the bag and adding their own sticker on top.

The folks at Green's don't seem to care though. As long as they're spreading the babka love, they're pretty happy people. They stuck to the same family recipe until 2008, when New York's trans fat ban kicked in, forcing them to modify the recipe. But they've got it down now again, and it's everything you'd want babka to be: moist, yeasty, swirly goodness. Never a bad bite.

The first two times I visited Oneg Heimishe Bakery, the door was locked with no signs of life inside. It was last summer and The New York Times had just written about this Hasidic pocket of Williamsburg, with a special shout-out to the "spectacular" babka here.

When it was closed the first visit, I stood outside looking confused, but assumed I just messed up the Sunday hours. The second time, I was frustrated and finally asked someone. "Oh, they take off the summer and move to Monticello in upstate New York," a woman said.

Six months later, there I was again, back outside the now alive-and-open bakery, dubious that this mythical babka and I would actually meet. But there they were—sitting on a shelf behind a bearded man at an old-school cash register. A hunched-over lady in the kitchen rolled rugelach dough. So, apparently this place did exist.

"How did they create so many delicate layers?"

Thankfully the babka odyssey has a happy ending. Perfectly swirled chocolate, almost as gooey as brownie batter, coiled with delicate layers of the yeasty dough. There's a bit of streusel crumble on top, but it doesn't suffocate the babka. Staring at all the layers makes you wonder if this somehow fell from the sky. How did they create so many delicate layers? All the tasters agreed: now this is babka.

This ain't a cheap babka ($15—the priciest of all) but if you're a chocoholic, maybe it's worth the splurge. There's triple chocolate action happening here: mini chocolate chips and melted chocolate drizzles on top, and the swirls in the loaf itself. There aren't many swirls—you may be digging for a while before finding a goldmine piece, but what's there is good-quality chocolate. The bready part could be moister, but the edges are nice. Especially if you get a piece with the crumbly topping.

It'll Get the Job Done, Sure

The powdered sugar on top didn't look right, but we still gave it a chance. It's a big honkin' babka (definitely the tallest one) but the chocolate distribution is awful. You get a huge hunk of the bready part (pretty dry too) and then a thick chocolate swirl buried somewhere. A few nut bits go along for the ride too. Not a babka gem, but probably more edible with a big mug of coffee.

Both the cinnamon and chocolate from Moishe's had a little lemony kick the others didn't. Was it a nice addition? Ehh, mostly just a weird one. "I made a face when first tasting it," wrote one taster (not a pleased face, she clarifies). Like the Zaros loaf, this one is super bready and for the most part, dry. The chocolate swirls are big, but poorly integrated. It's not bad (it'd be nice with brunch) but it's just not memorable.

The Best Overall, But Not Really Babka

If you stroll into Andres, the Hungarian bakery and cafe on the Upper East Side, and ask for a babka, they'll hand you this bundt cake-looking thing. "The Hungarian version of babka," they explain, but its real name is actually Kugelhupf (or Gugelhupf or bábovka, depending on what part of the world you're in). Whatever you want to call it, it's the best thing we tasted that day.

"If a chocolate croissant married a babka and had a baby."

"If a chocolate croissant married a babka and had a baby," described one taster. The flaky, buttery ring is filled with a sightly crunchy, chocolate goo.

Tasters made happy moans and kept returing to this one, describing it as: "Kind of life-changing." "Wow." "Best taste ever."

But since it's not really fair to compare it to its more traditional babka brethren, we made a separate category. Andres sells it by the whole cake ($12), not by the slice, and only bakes about six a day.

A Special Thank You

To our beer columnist Maggie Hoffman, gadgets/brunch columnist Nikki Goldstein, and dessert columnist Kathy YL Chan (who originally planted the seed in my head—she's such a babka-eating champ, she demolished a whole loaf by herself once) for joining us at the conference table. It was a beautiful sight to behold: ten loaves of babka all lined up, which quickly turned into a mountain of crumbs. 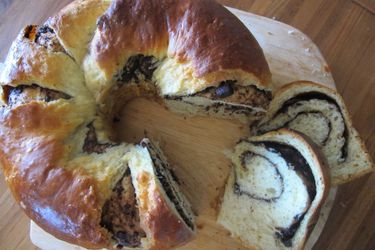