In the wake of a violent civil war, thousands of Sri Lankans uprooted themselves and settled anew in American cities. In New York, about a third of the city's population lives on Staten Island, largely in the Tompkinsville neighborhood near the St. George ferry terminal.

That makes Staten Island New York's destination for Sri Lankan cuisine. Manhattan may have a couple representatives of its own, but if you want to eat where the Sri Lankans do, you need to head over to the island. Do so and you'll be rewarded with some of the best cheap eats the city has to offer.

Over the years, writers have roved around the island seeking out the best Sri Lankan bites: from intrepid Chowhounds to Robert Sietsema for the Village Voice to Peter Meehan, Betsy Andrews, and more recently Pete Wells for the New York Times.

And those are great starts. But if you're checking out Staten Island's Sri Lankan options for the first time, you're probably asking: where should I go first? What are the best things to eat?

For the most part, the restaurants are sit-downs, not the most conducive to taking a few bites here and there. But each has its specialties and something unique to offer. Here's your guide to the best of the best, and to getting the most out of your trip.

What Is Sri Lankan Food Anyway?

Sri Lanka is a small island off the Indian subcontinent, and its cuisine bears similarities to those of both northern and southern India. Describing Sri Lankan food in full demands an article of its own, but here's a brief take on what you can expect to find on Staten Island.

Saucy curries are staples, often enriched with coconut milk and a spice mixture that might veer towards spicy, pungent, or sweet. The curries (meat, fish, and vegetarian) come with rice and vegetable sides like bitter melon and string beans.

Some dishes are composed of starchy mains with strong sauces and relishes on the side. The most famous of these are hoppers, fermented rice flour batter cooked in dome-shaped molds, then stacked up with an egg set in one. String hoppers are nests of rice flour noodles that are steamed and often sold in large quantities; pithu is a log of rice steamed with shredded coconut—the good ones are nutty-sweet and a little bouncy. All of these items can be eaten by hand, with sauces used for dipping.

There are also snacks sometimes called "short eats": fried lentil cakes similar to spiced Indian vadai (savory doughnuts), several types of roti, and fried vegetable and fish cutlets. A more substantial item, and one of my favorites: kotthu, chopped up starch—string hoppers or roti typically—stir fried with aromatic vegetables, egg, spices, and sometimes meat. Stir fried meats are sometimes called devilled, meaning they come in a sweet and spicy sauce not unlike some Chinese dishes.

And then there's lamprie, a historical must-eat with Dutch colonial influences. It arrives as a banana leaf bundle, which you unfold to reveal steamed rice and toppings that include tender meat, charred eggplants and plantains, soft cashews, and other curried vegetables. If there's any one dish to convince you that Sri Lankan food is worth your time, it's this.

New Asha is more a takeout steam table operation than a sit-down, seating about 12 in bare bones accommodations. But it serves the best food I've had on the island: meat and vegetable curries with incredible depth (potato-leek and jackfruit are must-eats), a slow burning roti kotthu that gives slight resistance to the teeth, and cumin-laced dhal vada (called "lentil cookies" there) that, when fresh, are one of the best ways to spend a dollar on the island.

Prices match the setting: curries cost as a little as $3.50 for a half pint container, and few dishes cross the $10 mark. Another way to look at it: eight people can eat three courses here for $100.

You don't go to New Asha for the setting, but there's a lot to go for. Be sure to get an extra pint of curry as a souvenir.

If you're looking for a more restaurant-style atmosphere, head to San Rasa, where the hoppers are crisp but pliant, the curries are deeply flavored, and the lamprie's a joy to eat. San Rasa's dishes are reliably concise and assertive, edging out the competition in subtle but noticeable ways. The rice in their lamprie and pithu, for example, is fluffier; the curries taste distinct (vegetarian split pea and black goat especially); and meat is by and large cooked very well. San Rasa also serves an excellent watalappan, a coconut milk custard with near-smoky caramel flavors from the addition of raw palm sugar.

The only thing I haven't enjoyed at San Rasa is the all-day Sunday buffet, where the regular menu isn't available. The food isn't bad at all, but it's a pale, oversteamed imitation of what San Rasa offers the rest of the week.

Lakruwana, the subject of a recent Times review, has two charms. One is the decor, which was shipped over from Sri Lanka piece by piece (the walls, too). Buddhas are everywhere. There is a thatched ceiling over one counter. Your menu is a two foot-tall wooden mask. "Transporting" is an understatement of what it's like to eat here.

As for the food, I don't think it has quite the same intensity and focus you'll find at San Rasa, except for the $12 Sunday buffet. It smokes San Rasa's, with 20-odd dishes held warm in clay pots, enough variety to send you back for a third helping. Highlights include a sharp pineapple curry, wilted kale with coconut, and a piquant coconut sambal you'll wan to slather over everything. The desserts are also all winners, mango and tapioca puddings especially.

Lak Bojun opened in 2008 right next to New Asha. It's hard to justify going there when New Asha is so close, except for one item: the best lamprie I've had on Staten Island. It's the eggplant and plantains that do it: they're cooked and cooked and cooked into sweet, snappy wisps of themselves. They rest on rice perfumed with banana leaf but also chili heat; this dish more than any other shows how Sri Lankan cooking relishes the slow burn.

Though the rest of the menu is adequate, stick to the lamprie here. Then head next door to New Asha to finish your meal.

For a Dosa on the Side: Dosa Garden

Dosa Garden is a south Indian restaurant that promotes its "chefs trained in Chettinad" as a point of pride, and rightly so: their rava dosa is up there with the city's best.

The restaurant also has some Sri Lankan classics on the menu, including a sweet and spicy roti kotthu and some nutty, delicate string hoppers well worth an order. The key for all these dishes is the accompanying sauces: one light with coconut, another warm with tomato, a third fiery with chili. They're nuanced and interesting, all the more so when you mix and match. Pick your starches here and dip, dip, dip.

How About Some Shopping?

Once you've stuffed yourself silly, head to Lanka Grocery and stock up on some groceries, Sri Lankan and otherwise. Look for a full story on this gem of a market soon, but in the meantime, use it as your source for curry powder (roasted and unroasted, with several varieties specific to the multiple ethnic populations of Sri Lanka), fresh and frozen rare herbs, hopper flour, and a full aisle of sambals to bring a taste of Sri Lanka home with you.

Want more? Check out the slideshow for shots of all my favorite bites. 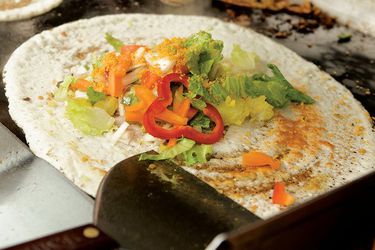