Ah, New Orleans. It's safe to say that no U.S. city—at the very least, of its size—crams in quite so much deliciousness. From boiled crawfish at seafood shacks to oysters on the half-shell in jacket-required dining rooms, from adventurous chefs to century-old sandwich establishments, eating in New Orleans is an unparalleled delight.

And if there's a bit of guilt that accompanies all that fried food and butter, it should be assuaged by the knowledge that eating in New Orleans these days is essentially an act of civic service. While it's a city remarkably rebuilt—a casual visitor could stroll around for days and never imagine the devastation of only a few years ago—it's hardly a city fully recovered. Consider its restaurants, in many ways a microcosm of the city: some came back soon after to Katrina only to fail within ensuing months; others were born as New Orleaneans started to trickle back; some institutions rebuilt slowly, brick by brick, and reopened only within the last two or three years. And others never came back at all. It's a thriving city, with no American equal, but one that needs support more than ever.

"Gulf seafood is still phenomenal—and it's still safe to eat."

Particularly with recent events off its coast, yet another affront to its shores: oil that has tarred the reputation of its prized seafood as much as the waters of its Gulf. The damage, it's clear, will be long and lasting. But restaurant patrons should know one thing: Gulf seafood is still phenomenal—and it's still safe to eat. Many Gulf waters, anywhere oil lapped, were closed to commercial waters during the spill; those areas have only been reopened once both the FDA and NOAA (National Oceanic and Atmospheric Administration) have rigorously tested the seafood for any chemical impurities. While some restaurants did report disruptions in their seafood supply, sourced from further out in the Gulf, or shouldered increased costs given the limited open waters, others saw hardly a blip. That's not to dismiss the impact of the oil spill on seafood suppliers —particularly the smaller ones—or the environmental havoc the oil spill has wrought.

But to the seafood industry, it's a one-two punch: first, the oil in the water; second, the crisis of perception. It's been tough for Gulf fisherman, but much of that comes from a public reluctance to eat Gulf seafood. So go to New Orleans. Order up the chargrilled oysters, tell the world how great they were—and you're doing a small part in helping them recover.

It's hard for any thinking person to visit the Crescent City and not consider the way Katrina and the oil spill have sent shockwaves through it—but those aren't the impressions you'll be left with. Particularly from an eater's point of view, the city is as alive and kicking as ever. As for our recommendations? If you're looking to cram as many delicious bites as possible into a few short hours, we've got some pointers. Warning: this is not a heart-healthy itinerary.

Right on Jackson Square, Stanley is a bright, airy upscale diner from chef Scott Boswell, chef-owner of the highly regarded Stella! next door. You won't go wrong with a stack of banana pancakes, topped with a melty scoop of vanilla ice cream—or, our personal favorite, the Eggs Stanley, a classic Eggs Benedict topped with two enormous, delicately cornmeal-battered Louisiana oysters. So plump that, when you slide a fork in, delicious briny juices soak into the English muffin, just like the egg yolk. Delicious.

Take a break from French Quarter sightseeing at La Divina, an artisanal gelateria with bold, unusual flavors including Peach Creole Cream Cheese or the refreshingly unsweet Green Tea White Chocolate. A large gets you four flavors; we recommend you take advantage of the variety. (Chef John Besh recommends the hazelnut.)

Drago's char-grilled oysters are one of those New Orleans foods so widely talked about they'd get eaten up whether or not they're worth your time. But how you can catch a whiff of these Gulf oysters filled to the brim with bubbling herbed garlic butter and not order half a dozen?

If you're looking for unadulterated oysters, go check out the master shuckers (and barbecue shrimp) at Pascal's Manale, or the tile-lined Casamento's Restaurant (reopening, after a summer closure, in early September).

There's plenty of fine dining in New Orleans to choose from—but if we sent you to one dinner, it'd be the pig-heavy dressed-up Cajun fare at Donald Link's Cochon. Don't miss the boucherie plate—all its meats cured in-house, from the ham to the headcheese—or the fried alligator, meaty chunks in a chili garlic aioli with a slow, creeping heat. On our most recent visit, a special of sweet smoked ham with fresh corn and figs was so spectacular as to stun a lively table into silence. But it'd be a shame to miss the wood-fired oyster roast, or the enormous heap of Louisiana cochon topped with crunchy cracklins, or a stewed rabbit with sweet crusty-topped cornbread dumplings... one visit won't do this place justice. We'd also point you to John Besh's Restaurant August as a can't-go-wrong.

You could order the French 75 at this classy, soft-lit French Quarter bar, of course—a crisp cocktail of champagne, lemon, and either cognac or gin.

But you're in good hands with anything shaken or stirred by Chris Hannah, one of the most highly regarded bartenders in the Crescent City. A great place to try any classic New Orleans cocktail, whether a Sazerac, a Ramos gin fizz, or a Vieux Carre. (A particular recommendation of our cocktail columnist Laren Spirer.)

Stopping for beignets at Cafe du Monde is like getting a pastrami sandwich at Katz's in New York or a lobster roll in Maine—which is to say, it may be a tourist magnet, but it's a delicious tourist magnet. The beignets are seconds old when they hit your table, finger-burning hot, with crisp shells and soft, doughy interiors; they're best washed down with a chicory-laced cafe au lait. But honestly, even if the beignets weren't tasty, a $2 plate is a small price of admission for the ringside view out onto Jackson Square.

Domilise's may be a little worn, but in the way of a child's favorite teddy bear—if it's aged, it's aged with love. In a sunny yellow clapboard house Uptown, its walls lined with faded photos, Domilise's could easily be written off as a corner dive bar if it didn't serve some of the greatest po' boys in the city. Your best bets are anything aquatic, as it's all fried to order: crispy shrimp, moist, flaky catfish, and oysters big and juicy and almost indecently delicious. Best fully dressed, with mayo, tomato, lettuce, pickles, and in the case of the seafood, ketchup—piled, as always, on light crusty Leidenheimer bread.

It's simply impossible to sample all of the city's best eats in a weekend. It's like spending 36 hours trying to visit every good pizzeria in New York, or look out over every beautiful vista in Northern California. This eat-inerary inevitably reflects our personal favorites. So tell us, eaters: Where do you recommend in New Orleans?

Looking to spend a bit less? Cafe du Monde and Domilise's won't break the bank—but tomorrow, we'll be back with more recommendations for eating in New Orleans on the cheap. 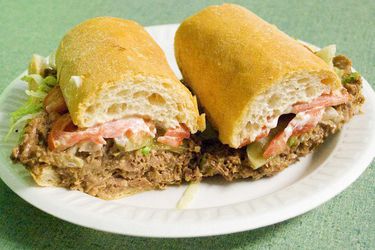