Turkey, duck, or lamb biryani? Thanksgiving will be different for many of us this year. Here's how the Serious Eats staff is celebrating.

You don’t need us to tell you that Thanksgiving is likely to look different this year. With the coronavirus pandemic keeping travel to a minimum and gatherings small, many of us are changing up our usual holiday plans—and the menus that accompany them.

It's been a long, grim year in many respects, and the Serious Eats team is looking forward to taking a moment to step back, reflect on what's most important, and eat some great food, no matter the size of the gathering (or lack thereof). Some will be sticking with tradition—albeit with some tweaks to accommodate a smaller table—while others are looking forward to cooking the turkey in parts, or even swapping it out for a smaller Thanksgiving bird. There will be fun new cooking projects galore, but there are also some of us who don't know what we're doing yet, and we want to remind all of you that that's perfectly okay, too. Read on to learn about how our Thanksgiving plans are adapting to the current circumstances and let us know what your Thanksgiving will look like this year in comments. (Feel free to check out Thanksgiving guide for inspiration!)

"This Thanksgiving, my husband and I will be hosting a small potluck with my quarantine 'pod' of six. This is, of course, assuming that virus cases in NYC re-stabilize, our small group's rapid tests come back negative, and we've all adhered to some fundamental best practices. (Should any of these factors change, our plan is to figure out a safe, distanced way to swap our components with one another so all the food and planning doesn't go to waste.)

"We've decided to forgo any gathering for Thanksgiving and just do it at home, which means a big bird is definitely out. My wife insists on having canned cranberry sauce, I insist on eating Stove Top stuffing, and our child has been promised at least one (not-pumpkin) pie, so we'll have those alongside some small bird—Cornish hens if I'm feeling cheap, a duck or a capon or something fancy if I'm feeling fancy (I have a couple squab in my freezer whose fates are, to date, TBD). But the format of the meal will be copied straight from Sunny Lee's Thanksgiving menu: the bird, the classic cranberry and boxed stuffing sides, honeynut samjang and a pile of leafy greens and chicories (no perilla, as it's not easily purchasable for me) to make ssam, and a raft of banchan or banchan-like dishes to fill up the table and create a feeling of celebratory excess. Already on the list are the Brussels sprouts and leek muchim and the potatoes bokkeum, and I'll probably make a couple more since they all keep pretty well in the fridge. Looking at it all written out, that means I'll only have to cook the bird the day of—everything else will be made in advance (or comes out of a box or a can)." —Sho Spaeth, editor

"Thanksgiving is my favorite holiday, especially since my aunt comes to visit from Ohio every year. Though she won’t be visiting this year, there will still be five of us around the table, so I don’t think we’re scaling down too much. If anything, we might just get a smaller turkey. But we’re still pulling out most of the stops—butternut squash soup, sweet potato casserole, my mom’s stuffed mushrooms, and—my favorite—mashed potatoes. My mom will probably try to use less potatoes for a smaller batch, and I will ultimately throw a fit and come out victorious. There will be Thanksgiving leftovers for days, and I’m totally okay with that!" —Yasmine Maggio, assistant social media editor

"I just moved to Highland Park, Illinois, so this year will be spent at my sister's house (she also just moved to Highland Park about half a mile from us). We're lucky enough to have some in-bubble family members who will be attending, so we're hoping to make it as festive as possible, given the times. I imagine we'll keep the food pretty traditional—including the Panda Express sesame chicken that my brother-in-law's parents always have at the Thanksgiving table—but I'd really like to mess around with our new recipe for smothered turkey wings, too. We'll also definitely be making Kenji's stuffin's because they are the only way to eat stuffing (so many crispy bits!). As we're doing this exercise of writing out our Thanksgiving plans, I see that Kristina is going to be making lasagna. I've made Daniel's lasagna several times and think it would make an excellent addition to our table. If you're going to go big, you might as well really go big. Just make sure you have some Tums, too." —Ariel Kanter, director of commerce and content marketing

Swaps and Twists on the Classics

"Thanksgiving will be small this year without any extended family, and I'm honestly not in the mood to think about it in the traditional sense. Besides mashed potatoes and pie, I am not the biggest fan of the regular Thanksgiving rotation anyway. Maybe this is the year to swap the bird with lamb biryani—it's complex, celebratory, and something I look forward to eating as leftovers without needing to get creative." —Maggie Lee, UX designer

"I've never been a fan of turkey, but I'll still aim for poultry with my Thanksgiving. I'll only be cooking for my girlfriend, so sous vide duck breast will be the main course, with some roasted Brussels sprouts, mashed potatoes (no recipe—just chuck in enough butter until it feels illegal), and a certain impossible pecan pie." —Joel Russo, video producer

"I’m not totally sure what Thanksgiving is going to look like this year, but since I’m not going home, I’ll certainly be making the same pie my family will be having across the country. We’ve been loyal to a pumpkin-sweet potato situation from The LA Times that was published in the '90s for as long as I can remember. As far as I’m concerned, it’s the only pumpkin pie that matters (or that I will eat). I’ll also make stuffing (bird or no bird!) to lovingly force upon my roommate before the actual holiday." —Jina Stanfill, social media editor

"I'm planning to make lasagna; maybe I'll even make and roll out the pasta and bake a loaf of sourdough bread to go with it. Perfectly happy to eat it with my little family of three. As to whether we'll stay home, go to my parents', or see my in-laws, that is TBD. My husband and I were just talking about inviting a small group of family members to our new place in upstate NY to celebrate Thanksgiving with us. We'll see if that actually happens." —Kristina Razon, associate editor

"Thanksgiving is usually a small affair for my family. Assuming we're healthy (and have access to rapid testing), my partner and I are planning to head to Pennsylvania for a couple of days to spend time with my parents and brother. We have a couple of traditions we'll have to convert to socially distanced alternatives: going out for pizza on Thanksgiving eve (I'm planning to make a couple of pan pizzas at home) and going to the movies over the weekend (Netflix!)." —Paul Cline, president

"I'm having dinner with my parents. Even a small turkey seems like a ridiculous excess for three people, but merely roasting a chicken lacks the necessary sense of holiday spectacle: maybe a Cornish hen for each of us?" —John Mattia, video editor

Still To Be Determined

"Like many people, our 2020 Thanksgiving plans are still up in the air. We originally intended to drive to the Boston area to spend the holiday with my parents, but with coronavirus numbers on the rise in Massachusetts, that no longer seems viable. Wherever we end up, my wife and I will put together a great meal that definitely won’t feature turkey, but will include plenty of wine, cheese, and salumi. And some stuffing, because stuffing is the best." —Sasha Marx, senior culinary editor

"I also don't know! Maybe my partner and I will go to my parents' house in Manhattan, maybe we will try to get a house somewhere for the weekend with them." —Daniel Dyssegaard Kallick, full stack developer

"My plans for Thanksgiving 2020 are perfectly suited to the moment: I have no freaking idea! Maybe we'll stay home. Maybe we'll drive up to my inlaws', assuming COVID rates don't spike and we think we can do it safely enough. Is 'safely enough' even possible? I don't know! I have no clue as to when we'll decide, or how we'll go about making that decision, and all of that is before we can even think about the food, which, I think it's pretty safe to say, will be scaled-down and minimal no matter what. Given the uncertainty and timing, I'm not even sure there'll be a turkey involved, which, frankly, is the least of our worries. Stay safe everyone, stay well, and here's to circling back next year under (hopefully) more certain circumstances." —Daniel Gritzer, managing culinary director 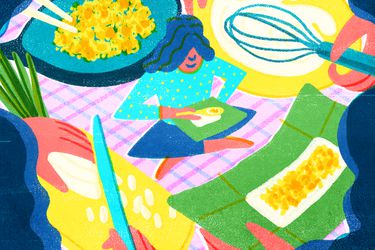