"Oh, wow, there's not that much cheese on this."

"They're pretty small. You could probably eat one yourself." (Waitress to customer.)

"You can't really pick it up."

I guess that even after the great American pizza renaissance of the 2000s, Neapolitan pizza is still new to some folks. And that's OK. I just figured I'd try to demystify it a bit if you've never had it.

Update/note: This post is geared toward folks in the U.S. or elsewhere who have never tried Neapolitan, Neapolitan-style, or Neapolitan-inspired pizza. It does not pertain to actual Neapolitan pizza in Naples, Italy.

First thing you're going to want to know is how much to order. This is probably the No. 1 issue I've see other customers struggle with. A typical Neapolitan pizza is about 12 inches in diameter—slightly larger than a frisbee. A person of average appetites will be able to eat an entire Neapolitan pizza by him- or herself.

That is to say: Always order 1 pizza per person. Don't try to split it. You'll leave hungry. Besides, more than any American-style pizza, I always see a Neapolitan pizza night as a true variety show. Round up three of your friends, each order a different pizza, and then share them all. It's the best way to get a feel for a pizzeria's range and abilities.

See also: What Is VPN Pizza? »

I've never, ever, ever seen a Neapolitan pizzeria do by-the-slice pizza. It's a whole-pie-only, sit-down affair. Either that or a take-out or delivery thing. But, really, you don't ever want to eat a boxed Neapolitan pizza. The crust just does not hold up well. It ends up steaming up in the confined space, and once it gets cold, it loses what crispness it had and has the potential to become very chewy. Eat in for the best results.

The wood-fired ovens that cook this pizza are crazy hot. So pies finish in about 2 minutes or less. That means that even though it's a sit-down affair (see above), meals at a Neapolitan pizzeria can still be pretty quick. If you stick just to pizza—no appetizers or desserts—you can be in and out in about 25 minutes.

If you've truly never had this style of pizza, prepare yourself for the fact that it might be what you would term "soggy." The liquid from the sauce and cheese tend to create a hot, soupy, molten area at the center of the pizza.

For some reason that I have never understood and probably never will — it is a cultural barrier I have come to accept — Neapolitans seem to like their pizzas with this "wet" center. That means that in some of the more "authentic" Neapolitan pizzerias, you might not even be able to pick it up. You'll have to use a knife and fork.

"Why can't they just make it crisper?" you ask. A Neapolitan would counter with, "Why can't you just eat it as is?" (And that would be the polite response. ;)

I used to bitch and moan about this trait for ages, but I've just learned to accept it. If the flavors of the pizza are awesome, not being able to hand-hold it is a small price to pay.

Update: The soupiness issue may or may not be a factor. And it all depends on the pizzeria you're visiting. Some Neapolitan-style pizzerias in the U.S. have taken American tastes into account and have adjusted their pizzas to be a little more dry and/or a little more crisp than a traditional Neapolitan pizzeria's. It all depends on where you go and the philosophy of the owner, which is what makes pizza such an endlessly fascinating (and time-absorbing and possibly mind-numbing) topic.

See also: All You Need to Know About Mozzarella Cheese »

Hey! They Didn't Slice My Pizza!

At some of these places, they're going to serve you a whole, uncut pizza. It's a little weird to Americans at first, and you might think it's a mistake. But remember the bit above about the wet center? If you leave the pizza uncut until it's at the table, the soupy part stays on top until the customer cuts the pie. And that ensures that the crust doesn't sog out on the way from the pizza oven to the table.

I'm not even going to get into the "charred" vs. "burned" debate, since we've gone down that road before on Slice.

Depending on the pizzeria—but more often than not in U.S.-based Neapolitan-style pizzerias—you are going to see a varying degree of charring on your pizza. It's almost unavoidable in the heat of a wood-fired oven. And in fact, many people, especially pizzamakers, see it as desirable. Most of the American-owned and -run Neapolitan-style pizzerias I've been to are into it. It's only at the really hardcore Italian-owned and trained-in-Naples places that I've seen a more subtle browning.

A nice light char will not hurt you and in fact can add a new layer of flavor and texture to the pizza. But if these dark spots are bitter and/or acrid, that's just burned.

Sometimes you'll see "DOC" or "DOP" on the menu. Usually on a fancy version of a Margherita pizza. (The Margherita being the classic sauce, cheese, basil-leaf pie that most resembles American pizza.)

The DOC stands for denominazione di origine controllata—it's usually in reference to the cheese and simply is a mark that guarantees the cheese to be from a certain region in Italy (in the case of buffalo mozzarella, the Campania region) and made to certain standards.

See also: What the Hell Does "DOP Tomato" Mean? »

The final thing I want to blab at is the topping state of the pizza. These pies are minimally topped. You'll actually see sauce through the cheese! In the best of cases, a Neapolitan pizzeria will have struck a careful balance among crust, sauce, and cheese. With not too much of any one component. Some folks love being able to taste all 3 components. Some folks think it's a rip-off. It's just something to know before you go, to manage your expectations if you're used to American over-the-top cheesiness. 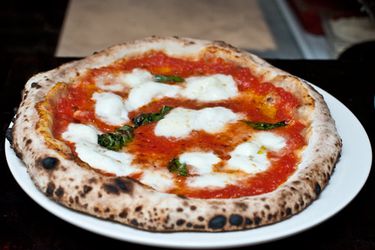