My wife Adri and I arrived safe and sound in San Francisco a few days ago, after a 10 day trip from New York that took us through New Jersey, Pennsylvania, West Virginia, Kentucky, Tennessee, Illinois, Missouri, Kansas, Colorado, Utah, and Nevada. We're happy to be out here in a city where the average produce aisle has 17 types of sweet potato alone, but man, did we eat some good things along the way. Here are some of the highlights.

(P.S. You can consider this my temporary good-bye. My wife and I will be traveling through Southeast Asia all summer, so please don't be offended if I don't get around to responding to comments until the fall!)

After some rather disappointing chicken wings at a sports bar in downtown Harrisburg, we hit up Jackson House, a Philly-style hoagie shop serving cheesesteaks, burgers, and great Italian combos, like the Mrs. Andreoli with sopressata, capicola (yes, they write "gabagool" on the menu board), sharp provolone, and the works (say yes to the hot cherry peppers). It's all crammed into a fresh South Philly roll, delivered daily.

There's no denying that Chick-Fil-A makes the best fried chicken and biscuits in the fast food business. Real chicken dredged and fried in-house, biscuits rolled and baked on premises. It's not the kind of breakfast you can eat every day, but what are road trips for if not an excuse to indulge in fast food?

Don't have a Chick-Fil-A in your area or want to avoid it for some reason or another? Just make a replica at home using this fried chicken recipe and cramming it into these biscuits!

Poutine, Burgers, and Barbecue From County Club in Lexington, KY

We met up with my good friend and fellow adventurer in the far reaches of culinary nerdery Stella Parks (you probably know her as Bravetart) in Lexington, KY, where she hauled us and the pups over to County Club, a barbecue joint run by a friend of hers. It's not classic barbecue by any means, but where else in the world can you find Vietnamese-style soup made with brisket ends and smoked fish sauce-marinated pork shoulder griddled on skewers served with a roasted Jalapeño nam chin?

Their burger and poutine aren't half bad either.

I get it: true Nashvillians know that the Loveless Cafe, a Nashville institution, just hasn't been the same since the new management took over and commercialized the business.

But to this East Coast Northerner, the idea of bottomless biscuits delivered to your table as soon as you sit down still tickled me silly. Golden and buttery, these biscuits are softer than the toilet paper in heaven when the angels decide to spring for the fancy double-ply stuff.

If that bottomless pile with free preserves isn't enough, you can get them stuffed as well. Fried chicken and sausage were totally passable, but the fried green tomato with pimento cheese and sliced country ham were legit.

The chicken fried steak with country gravy, fried eggs, and cheesy hash looks impressive, but I wasn't a fan of the bread crumb-style coating.

A Smashed Burger From Carl's Drive-In in St. Louis

It's rare that I come across anything I haven't seen before in the burger world, but it's safe to say I've never had a burger like the one they serve at Carl's Drive In, an old-school counter-style burger joint in St. Louis.

The burgers are cooked smashed-style on an old griddle, but unlike most smashed burgers, they're left on the griddle on one side long enough to render out fat and juices until all you're left with is a crisp shell of a patty. Imagine a beef-flavored parmesan crisp and you've getting the idea.

With that much browning, the flavor is insanely intense, though there's not much juiciness to speak of. It's ok—the cheese slice they slip between double patties when you order them (and you should, a single is just too small) makes up for it.

I'll have to do a bit of experimenting when I'm back stateside.

You don't think pizza when you think St. Louis, but when someone like Alex Talbot of Ideas in Food tells you to check out a restaurant, you do it. My wife Adri and I made an extra pit-stop in town just to eat at Pastaria, and man, are we glad we did.

Adri is not the type of woman who is prone to hyperbole, which is why it shocked me when she took a bite of the nduja pizza, made with the heavily spiced Calabrian sausage, slices of garlic, and a drizzle of honey on a Neapolitan-style crust and declared it the best pizza she's ever eaten. It certainly ranked up there in my book. Their house-made pastas, in particular a pistachio-stuffed number with brown butter, are also fantastic (not to mention generously sized).

On the opposite end of the St. Louis pizza spectrum? A pie from Imo's, the mini-chain that specializes in that strange thing known as St. Louis-style pizza. It's not actually a particularly unique style—cracker thin unleavened dough, cheese and toppings pushed to the edges so they brown and crisp, and served cut party-style in squares—but it's the cheese they use that makes it different. It's a processed cheese called Provel that has a texture somewhere between American cheese and mayonnaise, with a flavor to match.

If the tweets I got from St. Louis natives are anything to go on, some St. Louisans seem rather embarrassed by their native pizza style. They shouldn't be. It's a perfectly fine type of pizza so long as you top it up and don't expect the crust to be much more than a well-seasoned delivery system. To Imo's credit, the pizza was still crisp and crackery the next day, and I've got to admit that cold Provel is probably better than melted, mayonnaise-like Provel.

Multiple Locations in and around St. Louis

Driving through I-70 in Kansas sure is pretty, and for the most part uneventful. Adri and I were glad to get an invite from Serious Eater Steve White who told us to drive down to the small town (population: 2,200!) of Council Grove for a chicken fried steak lunch at this historic Hays House, a tavern that's been in operation since 1857.

I've gotta admit: by this point in our trip, Adri and I were getting a little tired of driving through parts of the country where it seems the only vegetables available are in the form of chopped iceberg with a side of ranch, but damn if this chicken fried steak wasn't worth the two hour detour. Thanks Steve!

It's not easy driving on a full stomach, so Adri and I took a break for a quick swim at the local reservoir before heading on to western Kansas, where we were confronted with the strongest thunderstorm I've ever seen (80 mph winds!). But that's another story for another time.

Sliders From The Cozy Inn in Salina, KS

I've found slider nirvana, and it is in the farmlands of western Kansas. Salina is the largest town you'll hit on I-70 before you make it into the mountains of Colorado, and it's worth a stop for more than just refueling the tank.

Operating in the same space (and on the same griddle) for nearly a century, the Cozy Inn serves up as archetypical a slider as you could ever hope for. Small balls of beef are smashed down onto an ancient cooktop, then scattered with handfuls of diced onions.

You sit down at the bar, and they start feeding you tiny burgers and don't stop until you cry uncle. It'll take you a while to get there, because these things are tasty. In many ways they're similar to the sliders you'll find at that Hackensack institution White Manna, the major difference being that Cozy Inn doesn't offer cheese (you don't need it), but unlike White Manna, does season their patties well with salt before sliding it into a soft steamed bun with a couple of pickles.

A Cheeseburger From Burger Radio in Denver, CO

Colorado—Boulder in particular—was an oasis of vegetables and awesome beer. We spent two nights there feasting on local produce in various forms. That said, a good, messy burger is still darn easy to love, and the guys at Burger Radio, a Denver-based food truck, do it right.

It's pretty clear they read Serious Eats from their menu. They've got Shake Shack-style shroom burgers, smashed patties, and of course, their own take on Adam Kuban's Fatty Melt (that'd be a burger with two grilled cheese sandwiches as its bun).

But the real draw is their straight up Double Cheeseburger. Two ultra-messy patties cooked on a flat top and held together with passion, hope, and a bit of American cheese. Griddled onions, bacon, and chopped pickles finish it off.

The burger is huge, but if you've got the space, check out their poutine, one of the most authentic renditions I've seen.

I've been in love with pupusas ever since working with a Salvadoran prep cook ages ago in Boston. She'd make up batches of the disk-shaped, cheese-stuffed corn cakes for family meal. It's tough to find great pupusas in general and I didn't expect to run into them in Boulder, but there they were, in all their crisp, light, cheese-stuffed glory.

Pupuseria Sabor Hispano deigns to serve their pupusas with rice and beans instead of the traditional chopped cabbage curtido, but it's a minor complaint that's easily made up for with a top-notch salsa bar.

I have a soft spot in my heart for "hot plate" Mexican food (you know, the kind of place where the waiter tells you "careful, hot plate!" every time they serve you?), and it might just be that I had a less discerning palate when I was a little kid, but I feel like I haven't had a really great platter of Mexican-American food for year, and it's not for lack of trying!

Fiesta Mexicana in Moab, UT solved that dilemma nicely with an exemplary chile relleno platter, complete with refried beans, ice cream-scooped guacamole, a gigantic well margarita, and red rice that was just starting to get crusty along the top from a stay in a wicked hot oven.

The giant red plateaus and arches around Moab also made for one of the nicest drives in 10 days of gorgeous driving. 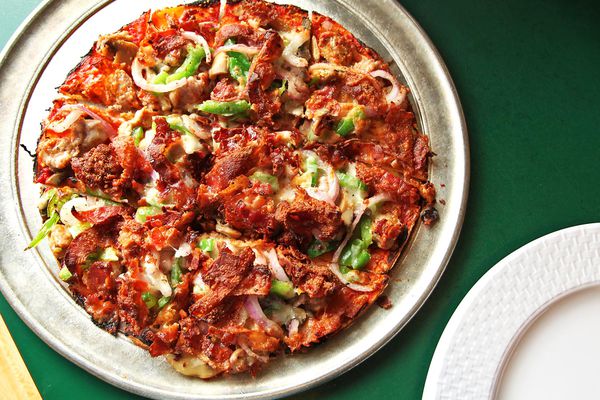 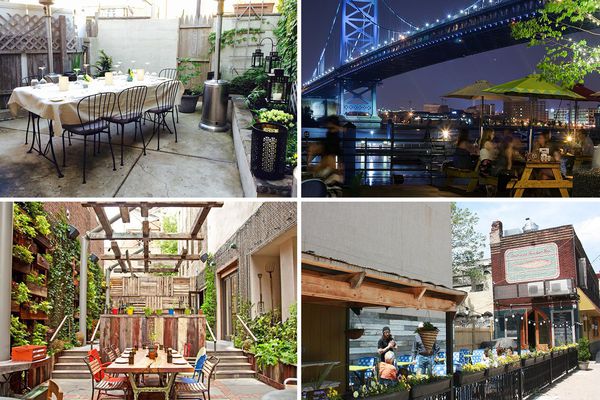