Have extra egg whites from a recipe that uses yolks only? Here are some delicious ways to put leftover whites to good use.

Whether we're making creamy butterscotch pudding, light and springy fresh pasta, or a fluffy loaf of homemade challah, most of us have encountered recipes that make excellent use of egg yolks, but leave behind a big bowl of discarded whites. (Have the opposite problem? We have plenty of uses for leftover egg yolks for you, too.)

While I can live with dumping an egg white or two down the drain every now and then, I'd much rather put every ingredient in my kitchen to good use. There are always soufflés and egg white omelettes to be had, but more out-of-the-box uses for whites don't always jump to mind.

The good news is, you don't have to use them up right away—whites can be frozen for several months. (Use an ice cube tray if you want to keep them in individual, easy-to-measure portions.) And, fresh or defrosted, they're key to some of our favorite recipes—think glossy meringue, General Tso's chicken, foamy cocktails, and even a better-than-store-bought, yolk-free mayonnaise. Here are some delicious ways to put leftover egg whites to good use. Before you get started, though, it's worth keeping in mind that all our recipes call for large eggs, and should you set whites aside for later use, you may want to label how many are in your container. Too late for that? Just grab a digital scale and reference the weight called for in our recipes, instead.

Most home cooks tend to shy away from making soufflés at home—they have a reputation for being downright scary to make. Our foolproof approach makes burning and collapsing fears of the past. The truth is, science is on your side: if your eggs are adequately beaten, they'll expand into a lofty soufflé without a problem (and use up five of your leftover whites in the process). This particular soufflé gets a hefty dose of cheese. We like Gruyère, but any semi-firm cheese will do the trick.

Get the recipe for Savory Cheese Soufflé »

Angel food cake is a classic crowd-pleaser, but it's also been known to collapse in the oven, making it a stressful undertaking for even experienced bakers. That's because most recipes start with a delicate, foamy French meringue base that's prone to under- or over-beating, weeping, and even breaking. Our technique sidesteps those common pitfalls by beating cold egg whites and sugar until they form a silky, stable foundation, with a texture akin to that of soft-serve ice cream. From there, it's a simple matter of adding cake flour and pouring the batter into your mold. The result? Perfectly formed, light, pillowy, vanilla-scented cake, each and every time. Oh, and in case you were wondering, we have a toasted sugar angel food cake imbued with notes of caramel; a lighter, mellower maple sugar angel food cake; and even a gluten-free version of the classic, too.

Get the recipe for Angel Food Cake »

Bleached cake flour gives these tender Lofthouse-style cookies their signature cake-like flavor and consistency, but we can thank the combination of egg whites and a bit of cream for their velvety texture and pale hue. Not only do these taste better than the kind from a box, you can dress them up for any occasion with frosting and sprinkles in your colors of choice.

There's nothing like cloyingly sweet, gluey icing to ruin a perfectly good sugar cookie. In this recipe, we cut the sugar's intensity with a little cream, salt, and acidic cream of tartar. An egg white base ensures that the icing sets up glossy and firm, making it ideal for smudge- and smush-free decorating.

Get the recipe for Royal Icing »

Using egg whites instead of whole eggs isn't always about cutting calories or cholesterol. In this tangy buttermilk batter, the high moisture content of egg whites is what helps the waffles to rise. Because the waffles rely on steam for their lift, rather than the leavening power of whipped whole eggs, they turn out more airy and crisp than the cakey versions most of us grew up with.

Get the recipe for Buttermilk Vanilla Waffles »

Few uses for languishing egg whites are more straightforward than light, airy meringue. And among meringues, Swiss meringue reigns supreme...or, at least, reigns easiest-to-make-and-find-many-uses-for: minimal ingredients, maximum stability, and a whole lot of smooth, silky, fluffy, multipurpose confection. Toasted sugar and fresh vanilla bean add enough depth of flavor that you'll want to eat it straight out of the mixing bowl, but be sure to save a bit for a batch of meringue cookies, Swiss meringue buttercream, pavlova, or this incredibly delicious double-chocolate cream pie.

Get the recipe for Perfect Swiss Meringue »

Swiss meringue is good for more than topping your favorite desserts. Combined with heavy cream, milk, and vanilla, it forms a light, airy no-churn ice cream that duplicates the fluffy texture of a Klondike Bar filling. We freeze the mixture, cut it into squares, and then dip it in a chocolate and refined coconut oil blend that solidifies on contact just like the Magic Shell that's used at your favorite ice cream trucks.

Get the recipe for Homemade Klondike Bars »

The exact same principal that works for the Klondike Bars above breathes life into these Strawberry Shortcake replicas. In this case, we divide a mixture of Swiss meringue and whipped cream into two separate batches. The first gets a touch of vanilla; the second is flavored with freeze-dried-strawberry powder and a splash of rose water. We pipe the vanilla meringue into popsicle molds and then pipe the strawberry meringue into the center of each one before freezing. To serve, simply dip the frozen pops into a mixture of freeze-dried strawberries and puffed rice cereal for a delightfully crunchy coating.

Get the recipe for Homemade Strawberry Shortcake Ice Cream Bars »

Swiss buttercream calls for cooking your meringue over a hot water bath. In Italian buttercream, on the other hand, the egg white mixture is only warmed up with a hot sugar syrup. This means it's technically not up to government-issued safety standards (though not any less so than, say, a sunny-side up egg), but it has the same texture and ease of use as its fully-cooked cousin. Making it, on the other hand, can be messy and laborious. So why bother? Because Italian buttercream is uniquely well-suited to working with natural sweeteners like honey, agave, or maple, that offer entirely new takes on traditional frosting.

Usually, when I serve a five-minute dessert, "five minutes" refers to the time it took me to buy a pie, cake, or pint of ice cream at the store, open its packaging, and transfer it to a dish. But this fruit mousse may actually be easier than all that—simply combine frozen fruit, sugar, and egg whites in a food processor and blend. The egg whites leaven the fruit purée for a brightly hued, delicate, smooth mousse. Spoon it into glasses and layer it with whipped cream and fresh berries for an elegant presentation.

Get the recipe for 5-Minute Fruit Mousse »

These English muffins aren't just no-knead—they're no-bake, too. Instead, our egg white–enriched dough gets an overnight (or multi-night) rise, which allows the muffins to develop the bubbles necessary for those famed nooks 'n crannies. Griddled on the stovetop, they get an oven spring–like rise, a chewy center, and a crispy, golden-brown crust.

Get the recipe for No-Knead English Muffins »

Homemade mayo has a delightful work-to-reward ratio—our go-to method requires nothing more than basic pantry staples and a mere two minutes of your time, but tastes significantly better than its store-bought counterparts. In this recipe, we add to the satisfaction by pulling the whole thing off without using a single egg yolk. An immersion blender is the perfect tool to bring the ingredients together, and the resulting condiment has a cleaner, more neutral flavor than the yolk-rich classic. Doctor it with other seasonings, or just use it in dishes where other, subtler flavors are meant to shine.

Get the recipe for Egg White Mayonnaise »

"Stir-fries and egg whites, a match made in heaven," said nobody, ever. And yet, it's not too far from the truth. Velveting is a Chinese cooking technique that transforms proteins into smooth and tender specimens, and it all starts with a marinade of egg whites, cornstarch, and wine. From there, the meat is usually blanched in oil and briefly stir-fried in a wok. Home cooks who themselves blanch at the thought of handling large volumes of hot oil will be pleased to know that water yields almost identical results. Give it a shot in a simple dish of stir-fried sweet and sour pork or chicken with mushrooms and oyster sauce; a platter of chicken with snap peas in a bright lemon-ginger sauce; cod paired with delicate summer squash and asparagus; or even crispy, glossy homemade General Tso's chicken.

It's perfectly possible to make glazed and spiced nuts without egg whites, but I'm hard-pressed to think of many occasions when I'd prefer it that way. Just one or two whites will work wonders on the exteriors of the nuts, lending them a crackly-crisp shell that encases sweet and savory seasonings alike. Flavor the raw whites with whatever aromatics or sweeteners you like, then fold your nuts of choice into the batter. Need inspiration? We're partial to these smoky candied almonds or a bowl of Mexican-spiced chocolate pecans.

When your leftover whites are the by-product of a laborious cooking project, you may not want to cook something else just to use them up. Yes, I've already suggested freezing them. Another option, though, is tossing those whites into a drink—egg whites can add frothy body to any cocktail you please, but they're traditionally incorporated into sours. From there, just pick your spirit of choice. We have recipes for whiskey sours, pisco sours, and lemongrass sours with vodka, plus gin cocktails featuring both Aperol and Campari. Bottoms up! 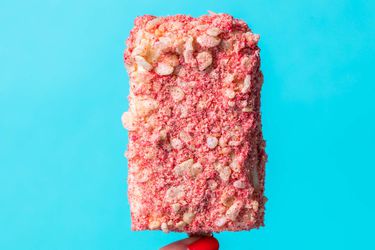