"...a pizzeria should be judged on how its pizza tastes, not on what alphabet soup is on its sign, or on whether the toilet paper in its bathroom is imported from Naples."

What is "VPN" pizza? Glad you asked. Do you want the short or the long answer?

The real question you should be asking is, "What does that mean?"

"VPN" is a designation given to qualifying pizzerias by the Naples-based Associazione Verace Pizza Napoletana or its delegates — VPN Americas in the U.S. and Canada and VPN Giappone in Japan (which, surprisingly, has more than 30 certified pizzerias).

To qualify as VPN-certified, a pizzeria has to agree to:

There are parameters on:

I won't go into further detail, because it's rather lengthy. You should go take a look at the requirements here [pdf], though, as they're quite fascinating.

Aspiring VPN pizzerias pay a one-time certification fee of $2,000 and annual dues of $250 thereafter. (See certification info here.) If approved, these pizzerias are then allowed to display VPN signs in their establishment and use the symbol in promotional material, on business cards, and on the company letterhead. The VPN organization also helps promote sanctioned pizzerias as well.

It's essentially a marketing tool.

Is VPN Status a Guarantee of Greatness?

So with all these strictures in place, the pizza is going to be AMAZING, right?

Personally, I've had pizza from VPN-certified pizzerias that has ranged from merely good to really great.

Because, in the end, you can follow all these guidelines and still turn out a mediocre result. Think of some of the worst bosses you've ever had. They had that fancy job title, right? But were they good at their job?

Whenever I see a news outlet blindly trumpeting that a pizzeria is VPN-certified, I sort of groan a little bit. Yes, it's relevant to the conversation, but at some point, I want to read about how the pizza actually tastes. Does it live up to the marketing hype?

See, here's the deal: As bad a career choice as this now seems in retrospect, I went to journalism school. And if there's one thing salty old J-school professors love drilling into students' heads, it's the maxim "If your mother says she loves you, check it out."

So on folks like me, VPN status becomes a bit of a double-edged sword. Yes, the marketing may work on the layperson, but for people who are really into pizza and who harbor a healthy amount of skepticism, I think it sets up higher expectations. Like, "OK, buddy. You've gone through all these hoops. Now let's see how your pizza really rates."

Some VPN places have overcome my skepticism, and I have been pleasantly surprised by them.* But, in my own experience, the majority of VPN-certified pizza I have eaten has been disappointing. Good, yes, in that way that melted cheese and tomato sauce on bread is almost always good. But not GREAT in the way that you'd expect for all this hoopla over certification.

I'm going to refrain from naming names here, because this is not what this post is about.

One thing I always like to point out whenever the VPN debate comes up on Slice is that the best pizza I've ever had has come from non-VPN-certified places.

Often, these non-VPN places could easily qualify for certification if they wanted to.

Sometimes I think that the VPN places are a little too hung up on "authenticity"** and that in the quest to do things just so, they deny themselves the opportunity to reach for something greater — to try combining toppings and ingredients that might not necessarily be used in Naples.

That said, this coin has two sides. There are amazing non-VPN places that strive to be rigidly Neapolitan in nature, and there are those that serve pizzas that are both traditionally Neapolitan and that are Neapolitan-inspired. What they have in common is that they don't view an outside organization's certification as having any bearing on what they do. They hue to an internal benchmark of success.

And the best VPN places I've been to have always been those who also seek to please themselves and their customers and who happen to have applied for and gotten VPN status for that extra bit of marketing validation — because, let's face it, lazy journalists will always fall back on parroting this line.

And for you newer Slice'rs, it comes up a lot on this site, and I'm sure the longtimers here are sick of my whole spiel already.

** Whatever that means. It's a topic I've grown tired of discussing when it comes to pizza or any food item, actually. 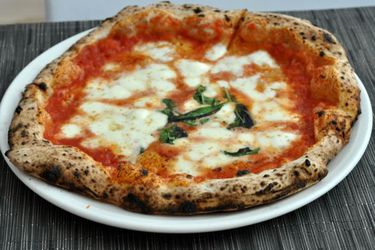