When I opened the refrigerator as a kid, the smell of Napa cabbage kimchi hit my face in a cold rush. My nose gladly sucked in the pungency. After I moved to New York City a year ago, I had a lot more kimchi brands to choose from. I became curious.

How did all these brands compare? The only way to find out: taste them all, and risk infusing the SEHQ air with that unmistakable kimchi aroma.

We tried five national cabbage kimchi brands and five brands that are locally produced in NYC. Daikon radish kimchi, whole Napa cabbage head kimchi, and fresh kimchi are available at many stores, but we made sure the cabbage kimchi had already been cut. It's the most common one found in Asian markets and mainstream grocery stores. The palate cleanser in between bites? Rice, of course.

Note: Since the taste of kimchi changes over time as it continues to ferment, we had no control over how sour kimchi brands would be at the time we bought them, but they were all consumed within ten days of the purchase.

Brands distributed in well-known retail stores across the United States:

Brands sold in NYC and not as widely distributed:

Kimchi should have a nice punch of sourness with a memorable burn on your tongue. At the same time, kimchi shouldn't be so foregone in its fermentation that it tastes like mush. It shouldn't feel too soft; it needs to have some crunch.

We didn't care for kimchi that was bland— it had to have a balanced sour, salty, and spicy flavor. Some brands tasted like sauerkraut. Others were far too fermented, making us wince and make funny-looking facial contortions.

Joining the SEHQ crew were Maangchi, who has taught hundreds of thousands of people how to cook Korean food via YouTube, and Jin Li Chan of the More Scrumptious Goodies (MSG) food blog. We also want to thank Brandon Touchstone and Amy Kantrowitz, SE events planner, for participating in the tasting.

Tobagi was a clear favorite, earning high scores for striking the right balance of sourness and spiciness. There's a trifecta of fishiness happening from the salted shrimp, anchovies and oyster sauce, but it's nicely flanked by sweetness from the apples, pears, and sugar. "A complex fermented flavor," said one taster. "It has a slight burn that lingers for a few seconds," said another taster. Tobagi was the spiciest of the five national brands we tried. Although it's made with MSG, the only other brand made with MSG, Assi, didn't score as high as Tobagi. The brand is sold in Asian grocery stores such as H Mart.

Made in Queens, Bing Gre was the saltiest we tried with a fishy undertone. The Napa cabbage is pickled with salt and anchovy sauce, then balanced with a little sugar. One taster wrote, "Sour BOMB," and thought the kimchi didn't taste balanced enough. Another taster took note of the saltiness, but said the kimchi had an overall satisfying taste. It's distributed up and down the East Coast. New Yorkers can find it at Assi Plaza in Flushing.

Read more about all the brands in the slideshow »

So You Wanna Make it From Scratch?

Try either of these two recipes:

What We'd Do with All the Leftovers? 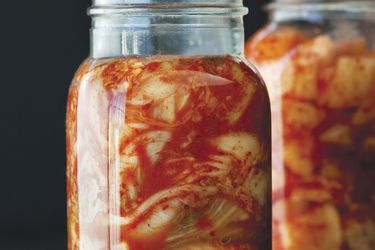 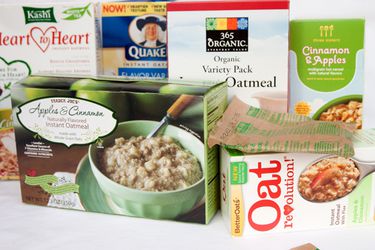