Nutritional yeast is an incredibly versatile pantry staple that can be used in soups, salads, over popcorn and even in noodle dough. It also just happens to be vegan.

Alicia Kennedy
Alicia Kennedy is a freelance food journalist based in San Juan, Puerto Rico. Her writings on food, drink, culture, politics, climate, and veganism are featured in The New York Times, Washington Post, The Guardian, Time, The New Republic, Eater, Serious Eats, and The Baffler, as well as her weekly newsletter From the Desk of Alicia Kennedy.
Learn about Serious Eats' Editorial Process

Nutritional yeast—or "nooch"—spent decades as a staple of the vegan pantry. Serious plant-based cooks have long reached for the flaky, yellow substance whenever they were looking for a cheesy, nutty flavor, in a salad dressing perhaps, or to season roasted vegetables. Some vegans might even have nutritional yeast fatigue: This powder with umami flavor and a health halo has been in heavy use since the publication of The Farm Vegetarian Cookbook in 1975, which has a whole chapter dedicated to the stuff—including a recipe for a vegan mac and cheese that looks a lot like the ones all over the internet.

Now, though, nooch has gone mainstream, can be found on many spice racks and in omnivorous pantries, and is a popular topping for popcorn no matter what one’s dietary preferences are. Whether or not it’s again a trend, cooks are still discovering new, compelling uses for the powder, which, thanks to its chemical make-up and nutritional content, can alter a food’s texture in addition to adding umami flavors.

Those flavors are a result of how nutritional yeast is made: A living strain of saccharomyces cerevisiae yeast—which is also commonly found in bread and beer—is fed a glucose-rich carbohydrate, like corn dextrose or beet molasses, inside fermentation chambers. This process cultivates the yeast, letting it grow, cell by cell, by forming proteins that make up its cell walls.

Yeast geneticist Sudeep Agarwala, who’s a program director and biological engineer at Ginkgo Bioworks, explains, "We know how to control the yeast breathing, so inside of fermentation containers, it's like a yeast yoga class. They're all inhaling and all exhaling at the same time."

Once the yeast matures, which can take up to two weeks depending on the amount of yeast and other factors, it’s heated, pasteurized, and dried, which kills it. (Eating active yeast results in dietary distress!) As its cells die, the proteins that made up its cells break down and amino acids like glutamic acid, which is naturally found in many fruits and vegetables, are released. It's this glutamate that gives nutritional yeast its cheese-like umami flavor. (Nutritional yeast has no added monosodium glutamate or salt.)

The drying process toasts the yeast, which gives it a nutty flavor, and leaves it in thin, flat shards, which are broken down into flakes or a powder and then packaged. Sealed airtight and kept in a cool, dark place, it can last up to two years.

At Red Star, which has used the same process to produce nutritional yeast since 1975, a pure strain of the yeast goes through a three-step fermentation process during which it’s fed gradually. Once mature, it’s isolated from its feeding liquid, heated, pasteurized, and, like other brands, including Bragg and Bob’s Red Mill, enriched with B vitamins* before it’s dried and flaked.

*Supplements are the most reliable way to get B vitamins in a modern vegan diet, hence nooch's popularity in the lifestyle beyond cheesiness. 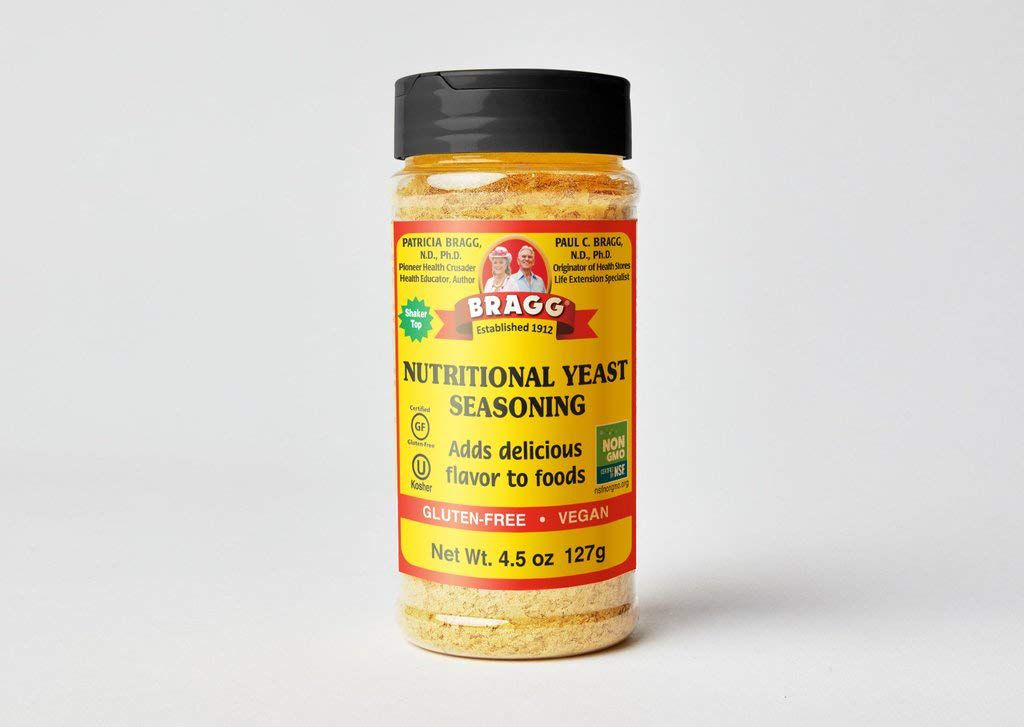 While the telltale yellow canister of the Bragg brand is the most famous icon of the flakes, Red Star, Bob’s Red Mill, and general bulk bin nooch are all widely available from big supermarkets and natural food stores across the United States. Here’s how to use it.

What to Do With Nutritional Yeast

Approximating the flavor of Parmesan cheese is perhaps nutritional yeast's most well-known and widely harnessed use. With a little doctoring, it will work in pestos and this nacho cheese recipe, which uses russet potatoes for some of its heft. It’s used to great effect in a stovetop mac and cheese, in a cauliflower-and-cashew alfredo sauce, and even in carbonara.

But by far the most common use for nooch on its own is as a popcorn sprinkle. I like to add about a quarter cup per one cup of corn kernels after popping, then toss it well with a few cracks of fresh pepper. (Popping the corn with a good amount of oil will help the flakes of nooch stick to each kernel.)

Because glutamate compounds can bring out a variety of flavors, nooch can make popcorn taste cheesy, mushroomy, or even like roast chicken. As Daniel discovered, nooch plus dried mushroom powder, lemon zest, garlic powder, and thyme mimic the flavors of a whole roast, distilled into one simple vegan snack.

Adding nutritional yeast to vegetables and sauces gives them a quick burst of saltiness and cheesiness, without actually adding salt or cheese. It works well as a seasoning on vegetables before or during any kind of cooking, including roasting or grilling. In his book Vegetable Kingdom, the chef Bryant Terry outlines a few other ways to season vegetables with nooch, including in marinades.

A Broth With Chicken-Like Flavor

The most interesting find in the use of nutritional yeast in recent years goes to Tim Chin, hands down, for figuring out that it could be used as a dough relaxer in hand-pulled lamian noodles because of the presence of glutathione in its makeup.

"The dough was relying a lot on repeated extensibility," Chin tells me, "and that's something that's very hard to achieve through the normal sort of channels and techniques, so I looked, after testing, through all these sort of mainstream methods and found that they didn't work." It wasn’t until he researched industrial techniques that he realized he could use nooch to mimic industrial-grade dough conditioners.

Like in broth, here nooch works because of its glutamate content. When recreating green bean casserole as a vegan recipe, cookbook author Kristin Donnelly reached for a combination of garlic powder and nutritional yeast to mimic what one would find in a store-bought can of cream of mushroom soup, which she also used to similar effect in a spinach and artichoke dip. Both those recipes use puréed cauliflower for body, which can be dull on its own, but nutritional yeast jazzes it up with the intensely satisfying salty flavor that one has come to expect from processed foods. Here, though, it’s an ingredient with heavy hippie connotations that provides a dose of B vitamins along with that umami punch.