Unless you hang out in central Mexico or live in an area where good Mexican food is plentiful, you'll be forgiven if you've never heard of mixiote. Unlike carnitas, chicharrones, tacos al pastor or other dishes associated with street fare in this country, mixiote has not become an international poster child of Mexican cooking. Heck, you can grow up here and still not know what it is. (I spent a good chunk of my childhood in the western Mexican state of Jalisco, and must confess that I had never heard of mixiote until a few years ago.) And, even in a place like Mexico City, a food-crazy megalopolis of over twenty million inhabitants that is part mixiote's home turf, it can be difficult to find.

So, what is the stuff? The Nuahuatl-derived term "mixiote" refers both to the parchment-like film or membrane obtained from maguey leaves and to the dish prepared by wrapping meat in this parchment and cooking it by pit roasting or steaming. Common varieties include mutton or rabbit. However, the dish can be prepared with any variety of ingredients, including beef, pork, chicken or fish.

The real key here is the marinade, which varies from region to region. Recipes are often a matter of family tradition. But a basic ingredient list might look something like this: aromatic chilies (like guajillo and pasilla), and herbs and spices such as thyme, marjoram, and bay leaf.

Despite the origin of its name, you are unlikely to find mixiote prepared with actual, well, mixiote. A presidential decree in the eighties outlawed most commercial use of the parchment because removing the maguey's protective membrane can kill the plant. Most people prepare the dish using regular baking parchment.

I asked Patricia Quintana, one of the country's foremost authorities on traditional Mexican cuisine, about the issue. She pointed out that the use of real mixiote parchment is making a comeback. This is thanks to the development of sustainable maguey plantations where the plant is cultivated specifically for its protective membrane.

"Ask a few questions before you go to town on a taco de mixiote. If it's made with real mixiote, there's a chance that it has been illegally poached."

Still, ask a few questions before you go to town on a taco de mixiote. If it's made with real mixiote, there's a chance that it has been illegally poached.

In Mexico City, tracking down good mixiote can take a great deal of patience. It's often found in temporary markets or hard-to-locate puestos (street stalls), making concrete recommendations difficult. A fellow food writer in the city recommended Lupita y Jorge's stall in the Mercado Lázaro Cárdenas. When I arrived, however, I was told that while, yes, they did serve mixiote, they only did so occasionally, and that there was no set mixiote day. (They insisted that I try some of their carnitas instead. As tempting as it was, I had to decline. I was on a mission.)

After an afternoon of walking, and building up a serious appetite, I was able to find a stall that serves mixiote every day: Ricos Tacos de Mixiote Estilo Tulancingo, Hidalgo, in the city's Centro Histórico (central district). The Carmona family, hailing from the city of Tulancingo, in Hidalgo state, runs this stand. The eldest generation of Carmonas started selling mixiote in Tulancingo nearly sixty years ago. Business there is still going strong. Thirty years ago, some of the younger Carmonas set up shop in Mexico City.

Like many taco stands and street stalls, theirs is a largely mobile business. Thursdays you can find them at Plaza Mexico (the world's largest bullfighting ring), while the rest of the week they pop up in various other locations. Happily for those without the time or patience to chase them across the city, their locale in the Centro (José María Izazaga, near the Isabel la Católica metro station) is a seven-day a week affair, and has been for the past five years.

"Her family recipe, unchanged for generations, calls for mutton in an adobo -- or marinade -- of guajillo chiles, garlic, onions, cinnamon, vinegar, and a few other secret ingredients."

Marta Carmona is in charge of this particular stand. She explained that unlike other varieties, Tulancingo-style mixiote doesn't include nopal (the flat pads of the opuntia cactus depicted on Mexico's flag) or avocado leaf. Her family recipe, unchanged for generations, calls for mutton in an adobo -- or marinade -- of guajillo chiles, garlic, onions, cinnamon, vinegar, and a few other secret ingredients. The marinated meat is wrapped in mixiote parchment (each package weighs about one kilo) and steamed for eleven to twelve hours.

The result is exquisite, and makes you wish they served the mixiote on real corn tortillas, rather than the flavorless Maseca variety. It's easy to see why the stand is a favorite with the local lunchtime crowd. One particularly hardcore regular boasted that he eats lunch in his office every day, and then comes down to Ricos Tacos to cap his meal with some mixiote.

A bit extreme, perhaps. My recommendation: come hungry, and try the tacos with all the different toppings (chile morita salsa, pineapple, guacamole and some pickled onion and habanero slices). If you're still hungry try the puesto's other specialty... tacos de cochinita pibil.

What?! You haven't heard of cochinita either? Stay tuned for the next episode of MFYMNHO. 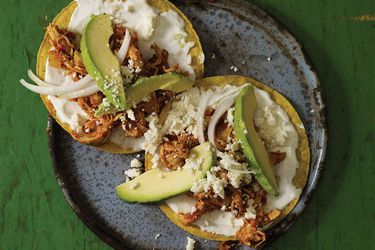 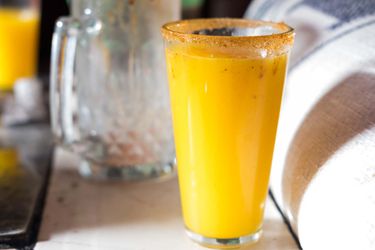 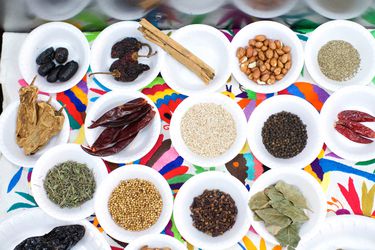 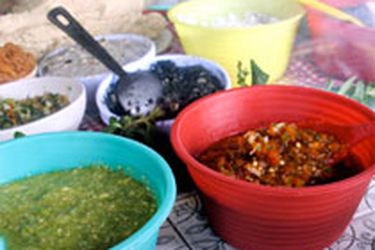