Do You Dukkah? All About the Middle East's Addictive Blend of Nuts, Seeds, and Spices

Dukkah is a mixture of spices, nuts, and seeds that originated in Egypt and can be used as a seasoning, a condiment, or eaten all on its own.

There are a number of spice mixes that are so closely associated with their place of origin, they're practically synonymous with the cuisine—say, jerk seasoning and Jamaica or garam masala and northern India. Others, such as curry powder, have become truly global forces, spread far and wide by inter-continental exchange.

But some blends transcend the line between regional speciality and internationally beloved ingredient. Dukkah, the Egyptian nut, seed, and spice mixture that has found its way onto genre-pushing menus, is a prime example.

Dukkah (pronounced DOO-kah) gets its name from the Egyptian Arabic word for "to crush" or "to pound," which is precisely how it's made. Recipes vary but generally consist of cumin, coriander, sesame seeds, salt, dried herbs, and nuts (especially peanuts, which are widely available in Egypt). The ingredients are put into a mortar (or, increasingly, a food processor) and ground into a coarse powder, releasing aromatics in the process. It's a versatile thing, both fine enough to sprinkle on as a garnish yet chunky enough to grab by the handful and eat as a snack, with a flavor profile that is specific to its place of origin yet thoroughly adaptable.

If there is any logic to dukkah's hodgepodgey, bits-and-pieces nature, it would be in its humble origins as scrappy peasant fare. In his book The Manners & Customs of the Modern Egyptians, first published in 1836, British scholar E.W. Lane wrote, "there are many poor persons who often have nothing with which to season their coarse bread but the mixture called dukkah," noting how eaters would plunge pieces of thick flatbread into it. Rich in protein and fats, the nuts and seeds would have provided sustenance. Even today, dukkah remains popular as a street food, usually doled out into paper cones, with each and every vendor laying claim to their own unique recipe.

Dukkah did first gain some traction beyond its home country after Claudia Roden published her mother's recipe in her 1968 cookbook A Book of Middle Eastern Food. But it has certainly had a moment of sorts, recently. Ana Sortun of Cambridge, MA's Oleana, has consistently included dukkah on the menu at her restaurant, serving it most recently as a dip with crudités and a Moroccan-style almond butter called amalou. She also has plans to incorporate it into a power bar with tahini, in a riff on its sustaining qualities.

Elsewhere, New York City chef Einat Admony has drawn attention for her grilled artichokes with pistachio yogurt and dukkah at Bar Bolonat, while Sami Tamimi and Yotam Ottolenghi's recipe in Jerusalem has spurred home cooks to break out the mortar and pestle.

There is plenty of good reason to keep the stuff in your pantry, too, as it makes for something of an all-purpose seasoning. Dukkah's ruggedness and fragrant spiciness comes through clearly when eaten with khubz (flatbread), as it traditionally is in Egypt. Often served for breakfast or as a snack, the pieces of bread are dipped in olive oil before being dunked in the dukkah, to help the granules cling.

Dukkah can also give welcome texture and complexity to dips (think yogurt, hummus, or baba ganoush), perk up salads and vegetables, or even be used as a rub for meat or fish. You could also just eat dukkah on its own, as they do in Australia, where it has especially taken off. There, dukkahs are sometimes made with coarse or whole nut pieces that can be nibbled on like a bar snack.

It's entirely possible to purchase ready made dukkahs from spice shops such as Kalustyan's, although the best way to fully experience its charms is by making your own. Almonds, peanuts, pecans, pistachios, and hazelnuts can all provide a suitably nutty base, while Sortun says that she's fond of pumpkin seeds, which tend to produce a wetter, stickier dukkah.

There are few limits to the other ingredients that can be added for flavor or texture, with nigella seeds, shredded coconut, chickpea flour, and sumac being popular choices. What matters most is that it's made with its ultimate use in mind and is fit to your own liking. As Roden says in her cookbook, dukkah is "a very personal and individual mixture," that bears the trace of those who pound their heart and soul into it. 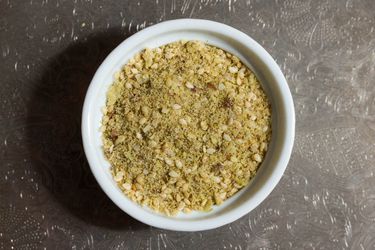