Last week, we discussed single malts, their history, and how they're made. Today, we'll look at the largest whisky category, by sales, in the world: blended Scotch whisky.

A Short History of the Malt and the Blend

Scotch production began as a side business for farmers, an economical way of transporting a crop to market. A bushel (or 56 pounds) of dried barley yields a little more than 3 gallons of Scotch, each gallon of alcohol weighing approximately 8 pounds. So one bushel of grain yields 3 gallons at a weight of 8 pounds per gallon, or about 24 pounds of liquor. If you were a farmer, would you transport 10 bushels of barley weighing 560 pounds, or 60 gallons of Scotch weighing 480 pounds? You can understand why farmers found it easier and more economical to transport spirits to market rather than grain.

By the early 19th century, illicit production of whisky was a thriving cottage industry, and farmers all over Scotland engaged in the practice. However, it wasn't until later in that century that farmers found an urban market for their drams.

Until the 1800s, there was very little Scotch available for sale in cities such as Edinburgh or Glasgow, let alone London or New York. Scotch, at the time, was considered the equivalent of moonshine—a drink enjoyed by unrefined highlanders, aged in sheep bladders and filtered through tartan.

No one of refinement drank the stuff; instead, urban elites enjoyed the finest European wines, along with sherry, port, and cognac. A number of factors converged in the latter half of the 19th century to change everything.

The Rise of the Column Still

First, the continuous still (or column still) was perfected and began to gain wider use. Invented in Scotland in 1826, the continuous still now is used by distilleries worldwide for the production of whiskies, gin, vodka, rum, and other spirits, but it was created for the express purpose of making grain whisky.

The continuous still is efficient in ways a traditional pot still simply isn't. First, a pot still has to be taken out of service after each batch to be cleaned. A continuous still, by contrast, can work constantly. It also produces a spirit purer in alcohol, stripping out more of the congeners and esters that pot-distilling leaves behind. Of course, this means that a continuous-distilled spirit lacks much of the character of a pot distillate, which is the reason continuous stills are forbidden in the manufacture of cognac and single-malt Scotch, for example.

Consider the continuous still as the intersection of boozemaking with the Industrial Revolution. What it allows is the manufacture of vast quantities of alcohol at a very low cost to the distiller. So this one innovation allowed the manufacture of huge amounts of very inexpensive grain whisky. But any product needs a market, and for grain whisky to find a market, something catastrophic needed to happen.

A Plague on the Grape

In the 1860s, the phylloxera epidemic hit European vineyards, very nearly destroying the wine industry. But phylloxera affected more than just table wine producers. It also nearly wiped out manufacturers of products made from wine: port, sherry, cognac (and other brandies), and vermouth, for example. Supplies of these products plummeted, and drinkers needed somewhere to turn.

The Role of the Mercantile

The final piece in the puzzle was supplied by the grocers and druggists who created the market for blended Scotch. You see, in the 19th century, retail sales of wine and spirits worked much differently than they do today. Retailers would purchase casks of wine, fortified wine, and liquor; bring them into their stores; and bottle the product themselves.

Some of the biggest brand names in blended Scotch started off as merchants. John Walker was a grocer in Ayrshire, Scotland. Justerini and Brooks (J&B) was (and still is) a wine merchant's shop in London. The Chivas brothers sold groceries in Aberdeen. George Ballantine was an Edinburgh grocer. Matthew Gloag, who introduced Famous Grouse, was a grocer and wine merchant in Perth.

(Incidentally, if you've never seen the advertising video that stars Robert Carlyle telling the Johnnie Walker story, it's worth a look. It comes and goes on YouTube, unfortunately. Right now, you can find it here.)

At first, grocers and wine merchants would blend together single malts, making products similar to the blended malt whiskies released in modern times by companies such as Compass Box. Blending malts was a necessary job for the grocer of the time, because supplies of malt whisky would vary from year to year. Today, malt production is a science as well as an art, and industrial best practices can help ensure a consistent product from batch to batch, but that wasn't the case 150 years ago. A farmer who provided John Walker with casks of malt one year might be unable to produce any whisky whatsoever the following year, or he might offer up a whisky of dubious quality.

But it was only with the addition of continuous-distilled grain whisky, in the middle of the 19th century, that blended Scotch began to take off as a product. Using grain whisky allows blenders to stretch their product, which reduces costs. This is why blended Scotch is generally less expensive to purchase than single malts.

So What Is This Stuff, Anyway?

The world of blended Scotch is wide and complicated. How do you know what's in each bottle? That's a hard question to answer. Blends can include up to 40 or 50 different malt and grain whiskies, each chosen to provide a certain character or flavor to the blend. For example, sweet and floral malts might be blended with malts that are earthy and mildly smoky.

Each blend, though, is a trade secret, a proprietary formula of whiskies held close to the vest by the conglomerates that own the brands. There are some things we can learn, or guess at, however, and I'll go through some of them now.

First, many blended Scotches bear no age statements at all. You can be sure that, by law, they're all at least three years old, which means all the whisky in the bottle—malt or grain—is at least that age.

Second, I explained this last week, but it merits repeating: If a whisky displays an age, all of the whisky in that bottle is at least as old as that age—for example, it's all at least 15 years old—and some of the whisky may be older. In practice, though, it's not in a distiller's interest to include whiskies that are much older than the age statement. So in a bottle marked "15 years old," don't expect that any of it is, say, 21 years old. The whisky is likely to all be about 15-18 years old.

Some brands delineate their product lines by age. For example, Ballantine's offers the following products:

However, the best-selling blended Scotch in the world does things a little differently, and let's take a look at that.

Johnnie Walker, of course, sells most of its products with color-coded branding. JW Red, its entry-level bottling, carries no age statement. Go up a level to Black, though, and you're getting whiskies that are all at least 12 years old. Green is 15+, and Gold is either 15 or 18, depending on the bottling. But then when you reach JW Blue, there's no age declaration.

You Never Answered the Question. What Is This Stuff, Anyway?

Like I said, the specific recipes for each blend are proprietary, and the companies behind them aren't talking. But you can make some interesting guesses. Start by learning which companies own each blend. Diageo, for example, owns Johnnie Walker and J&B. Diageo also owns a portfolio of single-malts: Caol Ila, Cardhu, Clynelish, Cragganmore, Dalwhinnie, Glenkinchie, Knockando, Lagavulin, Oban, Royal Lochnagar, Singleton, and Talisker. Johnnie Walker is justly famed for producing smoky blends across its color spectrum. Is it safe to assume that the smoke comes from, say, Lagavulin or Talisker? Again, no one at JW will confirm that, but that might be a safe assumption, yes.

However, I must add here that each of the major blenders also purchases malts from other producers, so it may be possible that the smokiness comes from Suntory's Bowmore distillery or Beam's Laphroaig.

The larger point is that spirits conglomerates own single malt brands not just for the sake of marketing those malts but to use them as part of their very lucrative blends as well.

What's perhaps also intriguing is that Diageo owns brands you'll almost never see in a liquor store—Blair Athol and Glen Spey, for example. These malts are produced exclusively for blending. Occasionally, Diageo releases bottlings from these distilleries into the collectors market, but they're usually hard to find.

Enough Already! What Do I Do With Blended Scotch?

Well, drink it, Jughead! I gotta hold your hand?

But seriously, blended Scotch is great in classic cocktails, such as the lovely Whisky Highball, the Rob Roy or the Blood and Sand. Don't go too upmarket for cocktails, though. For basic mixing, I like Dewar's White Label or Famous Grouse.

When I drink Scotch on its own, I prefer single malts, but I have to admit to enjoying Johnny Walker Black or Chivas 12, either neat or with a large chunk of ice. 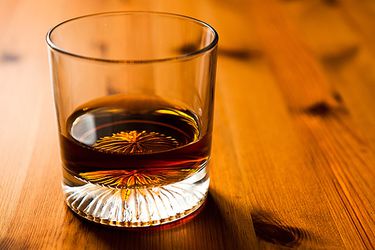 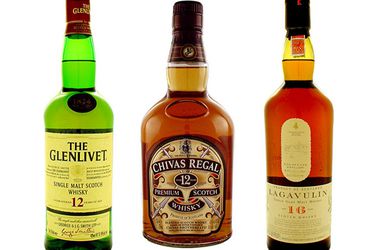