All about the spice's long history, as well as how to buy, store, and cook with it.

Description: Plump chile flakes made from Halaby pepper that’s sun dried, ground, and mixed with salt and a neutral oil.
Flavor profile: Fruity, tart, sweet-hot
Related Cuisines: Syrian, Turkish, Armenian, and other Middle Eastern cuisines
Storage: Kept in a cool, dark, and dry place, Aleppo pepper remains fresh for about a year before it begins to lose its flavor.

Whenever I walk into my favorite spice shop on the corner of Nostrand Avenue and Halsey Street in Brooklyn, my eyes can’t help but light up. Rows and rows of spices in assorted colors line the walls—every variety you can imagine and then some (a food editor’s dream!)—as warm scents waft throughout the tiny store. Each option presents new meal ideas and opportunities. I'll often grab some of my usuals, like cumin and whole black peppercorns, but the one I always reach for, since I go through it the quickest, is Aleppo pepper.

While most of us have an old, dusty jar of generic red chile pepper flakes sitting in our spice cabinets that we add to just about anything, Aleppo pepper is a more flavorful option. These chile flakes, with their rich red color and soft, oiled texture, add bright acidity and a sweet heat to anything they touch—which in my kitchen is a lot.

Aleppo pepper has a long history, one that has recently been affected by the ongoing war in Syria. We turned to Ethan Frisch, co-founder of spice company Burlap & Barrel, and Reem Assil, chef and founder of Reem’s California in San Francisco, to walk us through the ins and outs of Aleppo pepper—what it is, where it comes from, and how to use it.

Aleppo pepper's history starts, as with all peppers in the capsicum genus, in the Americas. Cultivated for thousands of years in present-day Mexico and other parts of North, Central, and South America, the pepper eventually made its way east across the Atlantic after Columbus' arrival in the late 15th century.

Once in Europe, peppers were traded and used as currency, moving from Spain to North Africa, and eventually throughout the Ottoman Empire—which was partially comprised of what is now Turkey and Syria. As they spread, new pepper varieties were born, leading to the eventual birth of the Halaby pepper, the variety that’s used to make what we know in English as Aleppo pepper. The Middle East was a hub for the spice trade going back thousands of years, and so ground Halaby pepper became a staple in the ancient markets of the old city of Aleppo, which is where the spice gets its name (Halab is the Arabic word for Aleppo).

Though Aleppo pepper is historically a Syrian product, most, if not all, of what you’ll find today doesn’t actually come from Syria. Due to the ongoing civil war, exports from the country have become minimal, and much of the spice’s production has moved to Turkey. There’s some debate about how Aleppo pepper produced in Turkey differs from that in Syria, mainly due to seed variation and terroir.

“They're all sort of under the umbrella of the Aleppo pepper variety: a classically sweet, medium hot, fruity pepper,” says Frisch of the peppers being grown in Turkey today. The Marash pepper, a close cousin of the Halaby pepper, is sometimes used for production in Turkey, and can therefore be labeled as “Aleppo-style” or Marash pepper. He notes that some may say Marash pepper is different from Aleppo, but they’re “approximately the same variety from approximately the same place.”

According to Frisch, the differences are so subtle, that only those intimately familiar with the chile are likely to notice them. There are also producers in Turkey who are attempting to minimize what differences there are by growing peppers from Syrian seeds obtained from seed banks or from refugees fleeing Syria who carried the seeds across the border.

The Halaby pepper is technically hotter than jalapeño peppers, with a Scoville heat unit of 10,000.

“I tend to like that people call it Aleppo chile because it pays homage to its origin," says Assil of the use of Aleppo even when the chiles come from Turkey. “Us Arabs, we're really proud of where things come from.”

Halaby peppers themselves are red peppers that are usually about four inches long with a noticeable twist at the end. Most varieties of the pepper have a sweet-hot flavor with a bright fruitiness to it. After the peppers are harvested, they are sun dried until they are almost fully dried but still retain some plumpness. Once ground, the flakes are mixed with neutral oil and salt, which functions as a light cure that helps preserve some of the fresher, sweeter flavors of the pepper, giving the spice its distinct bright red color, and a texture that’s softer than the bone-dry red pepper flakes most people are familiar with.

“It's especially great for people who like the flavor of a chile but don't want a ton of heat,” says Frisch (the culinary implications of this are something Daniel Gritzer, our Senior Culinary Director, has written about before). “The sweetness balances the heat and it's not overwhelmingly hot, but it has a great flavor.” Though the Halaby pepper is technically hotter than jalapeño peppers, with a Scoville heat unit of 10,000 versus jalapeño’s range of anywhere between 2,500 to 5,000 SHU, the spiciness of Aleppo pepper flakes is relatively mild, likely due to the removal of the seeds during processing.

How to Buy and Store Aleppo Pepper

Aleppo pepper is sold online, as well as in most Middle Eastern markets and spice shops. Look for jars where the Aleppo pepper is a dark, vibrant red color, with small, soft flakes. The flakes should be somewhat shiny from the oil that’s coating them. Good quality Aleppo pepper will also have the seeds removed, since they’re bitter and change the color of the spice. So if you see seeds when shopping for this pepper—along with a dry texture and a faded color—you’re looking at a low-quality product.

“I always taste Aleppo [when shopping for it],” says Assil. “Make sure it has not too much earthiness, and those kinds of pops of sweet and tart flavor.”

When it comes to buying spices, it’s best to seek out specialty purveyors who offer information about where their spices come from and who harvested them. The more sourcing information available, the better the product will generally be. Given the lack of Syrian Aleppo pepper being produced today, Frisch suggests buying Aleppo pepper that’s listed as coming from Turkey, as the type of peppers being grown there are the most closely related to the Halaby pepper (and, as mentioned above, in some cases are grown from Syrian Halaby seed).

As for storing the spice, you’ll want to keep it in a cool, dark, and dry place with your other spices. If you seek out relatively fresh Aleppo pepper, it should last at least a year before it begins to lose too much of its flavor.

How to Cook With Aleppo Pepper

Across the Middle East, especially in places like Turkey and Syria, Aleppo pepper is used in beans, salads, dips, and as a marinade for meat, especially grilled meats like kabob.

“The color is part of the appeal,” says Frisch. “If you get kabobs and other things from [Turkey and Syria], there's this kind of brick-red color in the meat and the oil. You'll get ground meat kabobs where the pepper is sort of folded in.” Assil notes that the spice is often used as a rub when making awarma, a popular Middle Eastern lamb confit, along with seven spice. The dish can be made using the breast or shoulder of the lamb, and it’s cooked low and slow until tender. While it’s cooking, the fat renders and the chile turns it red. Awarma is also used to top hummus, and its rendered fat can be drizzled on other dishes, almost like a chile oil. “It's not only aromatic, but it has that functionality of making food sexy,” says Assil. 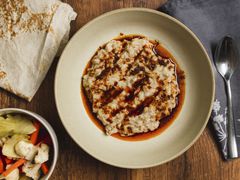 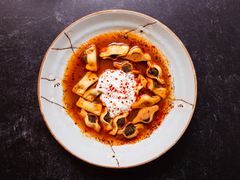 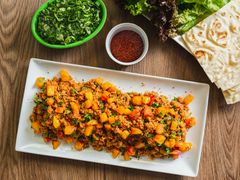 While you can’t go wrong by including the spice in your meat preparations, the versatility of Aleppo pepper also makes it great for adding to everything from stir-fries to pastas and even your morning eggs. It plays especially well with tomato-based dishes, like stews and sauces. You can add it while you’re cooking or use the spice as a finishing touch at the table. It can be a good idea to add it little by little as you cook until you’re satisfied with the flavor, though Aleppo’s typically more mild heat level poses less of a risk of overseasoning than some other chile flakes. It works well with other spices like cumin, coriander, and cinnamon, but it’s also vibrant enough to stand out on its own.

One Aleppo-forward recipe that quickly became a Serious Eats staff favorite is the Armenian preparation of harissa, a wheat and chicken porridge. The Aleppo chile is bloomed in a combination of browned butter and olive oil, creating a complex and savory condiment for the porridge. You can also use it in sweet applications like brownies and hot chocolate; its fruitiness pairs well with sweeter foods while cutting through their richness, and giving desserts a kick of heat without being overwhelming. At her restaurant, Assil also uses it as a spice rim, mixed with salt and black lime, when serving micheladas.

No trip to my local spice shop is complete without me grabbing a jar of Aleppo pepper. I'd wager the same will be true for many others who give Aleppo a try for the first time and discover for themselves just what a powerfully versatile and delicious dried chile it is. 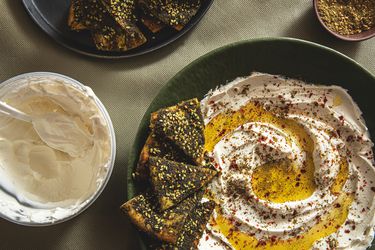