My husband, Ham, is a chef’s chef. He takes pride in what I think are entirely useless skills*, like being able to stack perfect quenelles of ice cream on top of one another or turn a potato into a seven-sided potato. So when I see him carefully pulling the germ out of every clove of garlic, I just assume it’s his disorder acting up.

*To be fair, he too admits that many of them are utterly useless.

Or is it? Whether or not it’s really necessary to remove the germ from garlic is a proposition that can easily be tested. And so, armed with enough garlic to clear the streets of Transylvania, I set out with only one goal in mind: To prove him wrong.*

*And to find the truth—'cause, you know, it’s out there.

I waited until summer, when I would have access to both fresh, young garlic from the farmers market as well as old, dry heads from the supermarket. I then used them both, with and without the germ, in cooked and raw applications. After subjecting the office to some pungent taste tests, the results couldn’t have been more clear: Yes, my husband is right...mostly. (Just don’t tell him I said so.)

Should You Remove The Germ From Garlic?

Now, here’s all the nitty-gritty details:

A Short And Sweet Garlic Primer

Garlic is in the allium family, along with its pungent relatives onion and leek. Even though it’s easy to find year-round, garlic is seasonal, with harvests from late summer to late fall.

Almost all cultivated garlic reproduces asexually, and is grown by planting cloves into the ground. The garlic germ lies in a small cavity in the center of every garlic clove* and it’s basically a future garlic plant—a garlic “precursor” of sorts. (If you’re interested in more fun garlic facts, Garlic and Other Alliums: The Lore And The Science by Eric Block is packed with gems like this one: “It is illegal to eat onions while attending church in Burdonville, Vermont.”)

*Well, not all cloves. There can be several sterile cloves in any given head of garlic, but I didn’t want to rub it in. I

Garlic cloves are botanically referred to as storage buds. More specifically, the dried outer hull on a garlic clove is called the protective leaf, while the collection of fructose chains that make up the clove is actually a swollen storage leaf. Inside that leaf is the young sprout, the hope of the future, the garlic germ. If you plant a clove of garlic, it’ll grow into a new head.

The germ consists of a tiny future stem and leaf. As the germ grows, it utilizes the starch reserves in the storage leaf (i.e., the surrounding clove) for energy, sprouting through the soil. The sprout then grows, adding leaves around it, much like a leek or an onion in the early stages of development. The bases of the inner leaves swell, bearing three to five cloves each.

After garlic is harvested, it goes through a curing process, where the heads are stored in well-ventilated, dry storage for about two weeks. During this curing process, the garlic loses up to 20% of its original moisture content and grows concentrated in flavor. Fresh garlic, straight from the ground, is actually pretty mild. Garlic doesn’t become pungent until after the curing process and a cook breaks open its cells.

Remember how I said garlic is seasonal? Well, garlic harvested in the summer and fall is kept in refrigerated storage in a nitrogen atmosphere for months, making it available year-round. The more time that has passed since harvest, the more moisture is lost from each clove, the more that clove's flavor grows in intensity, and the germ grows larger and more pronounced.

If you split a recently harvested garlic clove in half, the germ is barely visible as just a fuzzy lining inside the clove’s cavity. Buy a head of garlic in January and split a clove and you’ll likely find a thick, green shoot down the center. That’s because your garlic in January was likely harvested in September, and held in storage all those months.*

*Want a reason not to refrigerate garlic? The cold temperatures of the fridge can cause premature sprouting, harshing your garlic's mellow buzz and making your September garlic taste like January.

What to do with that shoot has been up for debate among chefs for a while. Some insist on pulling it out, arguing that it leaves a harsh and hot flavor. Others only feel it’s necessary to remove for raw applications, where the germ’s flavor will be more pronounced. And some chefs believe that the germ doesn’t have a harsh taste at all; they argue that because the germ is just young garlic, it is as tender and mild as the just-harvested stuff.

Which side is right? Well, we already know, but let’s find out why:

By waiting until summer for testing, I was able to take advantage of that golden garlic hour when both recently harvested and last-season’s garlic are simultaneously available. I split the new and old garlic into two test groups and further divided them into “with” and “without” germs. The young garlic hadn’t yet developed their germs, so I instead carved out the cavity where the germ would have eventually developed using a tourné knife.

I wanted to test the differences in flavor between cooked and raw applications, so with each set of garlic I made both toum and tomato sauce. The toum recipe calls for de-germed garlic by default, but I made a batch with and without. For the tomato sauce, I doubled the amount of garlic called for in the recipe with the hopes of more distinct variations. Ultimately, I was left with eight samples for tasting.

Before this test, I had never really thought about the seasonality of garlic, but just from peeling the cloves—even before the taste tests—I already found distinct differences among the new and old harvests. The fresh garlic from the farmers market was sticky and moist, making them exceptionally fragrant—as well as challenging to peel.

The batches of toum and tomato sauce made from the new-harvest garlic were the overall favorite of all the tasters, beating out old garlic in all forms, with and without the germ . There was no significant difference between the fresh garlic with and without the germ, which isn’t surprising considering that they didn’t have much of a germ to begin with.

What amazed me was just how significant the differences in flavor were between the two samples of old-harvest garlic. The toum made from the older garlic with its germ was harsh and spicy, similar to wasabi or horseradish. However, the toum made with old garlic that had had the germ removed was just as garlic-y, but without that unpleasant heat.

I expected the tomato sauce, with it’s long simmering time, not to show any variation in taste between the old garlic with and without the germ, but all the tasters were able to identify the tomato sauce and toum made from old garlic with the germ intact as deficient. Although the garlic wasn’t burnt, a couple tasters even found the sauce to taste acrid and bitter.

So, now that I know all this, am I going to start pulling the germ out of old garlic cloves? Maybe—if I remember—and my husband isn’t around. I think it’s fussy and I don’t mind the extra heat (and then there’s the whole issue of pride).

It’s also worth noting that I tested the extremes: new heads that are fresh-faced and just hitting the markets stalls, against old heads dusted off after a long stay in commercial storage. There’s an entire year in between where the germ progressively grows, so there’s a sliding scale of importance to removing it.

But I will always be paying attention to when my garlic is harvested, and make the most of it when they’re young. Perhaps my biggest takeaway from this testing is how deeply and fully flavored and aromatic recently harvested garlic is, particularly when compared to older stuff that’s been in commercial storage. It is full of garlic flavor, but sweeter and without as much harsh pungency, which I had previously assumed was a quality inherent to all garlic.

From now on I’m going to stop thinking about summer as the season for juicy berries and colorful peppers. Summer is the season for garlic. Let’s all pack our beach totes and picnic baskets full of heads—to the farmers market! 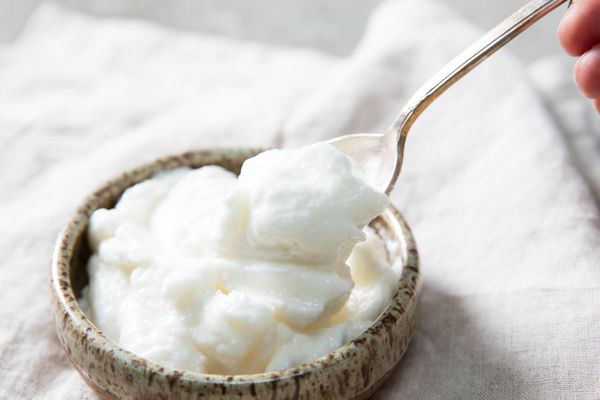 Toum Is the Garlicky Eggless Mayo That Goes With Everything 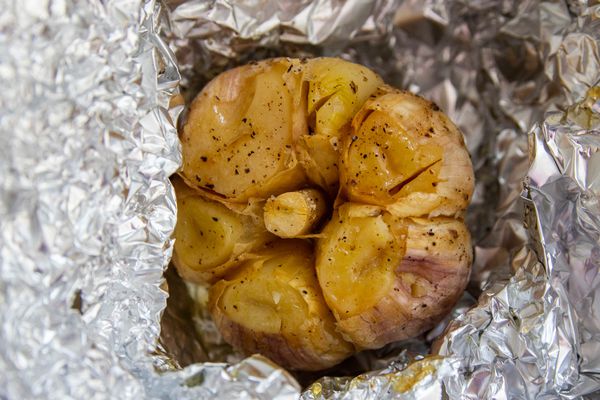 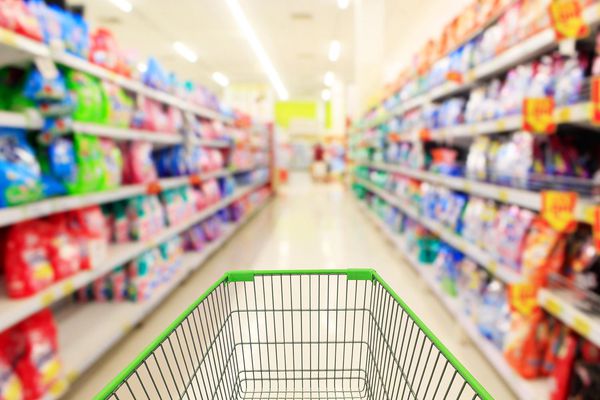 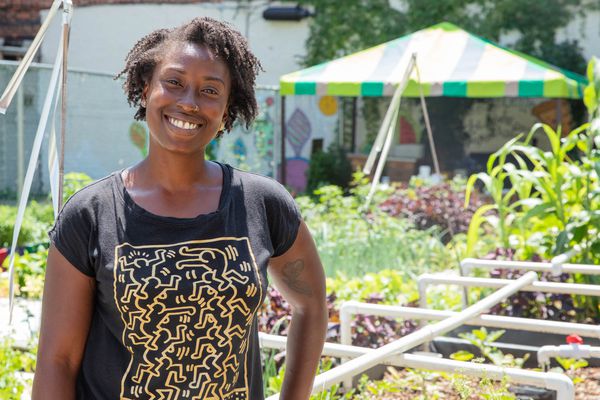 Behind the Scenes at NYC's Biggest Outdoor Aquaponic Farm 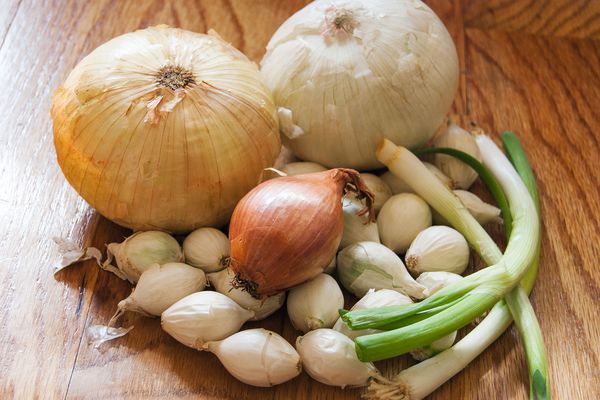