I'm about a month away from turning in my first cookbook, and I can definitely say it's been the biggest project I've taken on in my professional life. I am writing and developing 115 recipes over about nine months, along with travel, research and interviews—and, in my spare time, maintaining a tourism business, somewhat maintaining a blog, and striving for a semblance of home life. (Honey, if you're reading this, sorry we haven't taken that vacation.)

Here are the five biggest lessons I've come away with since I started this project in January.

You Can't Do It Alone

When I first got this project off the ground, I felt like I'd entered a dark cave. Instead of getting too fixated on my spiraling emotions (more on those later), I focused on gathering information and assembling a team. I asked cookbook author friends how they organized their work while taking copious notes. I sketched out a rough timeline and realized that, with travel and research, I'd need help getting these recipes ready for publication.

So I asked a friend who lived in my neighborhood whether she'd cook with me twice a week for no pay. (I was nervous about even asking her at all, but I told myself it didn't hurt to ask.) Surprisingly, she wanted to learn more about Mexican food and the cookbook-writing process, and she said yes. I created the recipes each week, and she'd weigh the ingredients, take notes, chop, and flag confusing language in the text. Eventually—once she familiarized herself with the method, and the layout of my kitchen—we'd knock out four or five recipes in four hours, much more than I could have done alone. We did everything at night, after both of us had worked during the day. When my energy started to flag, usually around the third hour of being on my feet, she'd encourage me that we were almost done. And she'd take food home with her, and report back the following week how much her friends and family liked it.

It was important to me that the recipes work outside my own kitchen, too, so I hired a recipe tester. Her job was to cook the recipes at her house and further flag any confusion or errors in the directions. During weekly meetings at her house in Brooklyn, she'd present the dishes, and we'd taste them and talk about whether they worked and how to make them better. She also pointed out which ingredients were difficult to find and offered possible substitutions. Surprisingly, a lot of ingredients I found easily in Queens (such as cleaned cactus, or frozen mamey pulp) she had trouble finding in Brooklyn, even in Mexican neighborhoods like Sunset Park.

Over the course of a few months, we established a routine—I'd develop a recipe alone or with my friend, tweak it until it was right, then send it to my recipe tester for more fine-tuning. I looped in my brother to test a few recipes too, since he had a different perspective as an enthusiastic home cook in Southern California with three kids. With the help of the three of them, the book began to take shape.

The Kitchen Will Become My Second Office

I was working from home before I started this project, and I used to love how I could whip up a hot meal every day for lunch, just for me. Nowadays—after logging several hours on weekdays and weekends in the kitchen, cooking for the book—I can barely bring myself to turn on the stove for anything but the book.

I keep my writing clothes and my kitchen clothes separate. For cooking, it's a clean apron and dish towel, a hair covering if it's hot and humid out (otherwise my face drips too much sweat), comfy jeans and T-shirt, and close-toed shoes. For desk-only writing it's jeans or yoga pants, flip-flops, and a nicer shirt. I learned the hard way not to wear flip-flops in the kitchen when I accidentally dropped a frying pan on my foot. Luckily I didn't break anything.

Other desk items migrated into the kitchen: sticky notes and a Sharpie for labeling food in the fridge, a ruler for measuring ingredients, and scissors (not kitchen shears) for cutting up grocery bags to line the tortilla press. I stockpiled plastic quart-size takeout containers to use to for storing stocks and leftovers. Two stools, which I'd originally placed in the kitchen for guests, became extra shelves for hot pots, a splatter-free place for recipes, and all-important seats when we needed to stir mole for 45 minutes.

The cookbook swallowed my pantry. Dried chiles from Mexico and the U.S., spices, tortilla and tamal flour, and beans multiplied faster than I could keep up with, smothering the oatmeal, raw honey, and other items I liked in my non-book life. (Right now I've taken to storing dried chiles in airtight containers on the windowsill.) The fridge succumbed to the book, too. My produce drawers overflowed with tomatillos, poblanos, cactus, and other items I needed for the week. Various batches of leftovers, meat, and prepped ingredients took up most of the remaining space. Often I needed to clean the fridge out just to make room for my Thai takeout container.

Maybe seasoned cookbook writers don't have to deal with this, but as a novice, writing my first cookbook felt like the first day of my first real job. I'm a professional woman in my mid-thirties, but I spent most of the early day of this project terrified of my deadline, feeling alone, and wondering whether I was doing everything right.

On bad days I was convinced that the book simply would not come together—either because the ingredients weren't as good as those in Mexico, or because the elusive flavor combinations I'd imagined in my head, after testing several variations, maybe didn't exist. About halfway through the project, I met with some cookbook author friends, and one of them asked, "Have you sat on the kitchen floor and cried yet?" I hadn't, but I had wanted to.

Now, about three weeks from my deadline, I'm strangely calm. I have gotten through a slog of recipe failures and made it out the other side. None of the recipes conquered me, as I thought they might. Friends and strangers have tested and loved the food. And I know deep down that this book is my best work, even if it's not perfect.

A Recipe is Never Done

A recipe, at its heart, is drawn up from a collection of circumstances: flavors the writer likes at this point in time, her background and experience, her access to ingredients, and, if we're speaking truthfully, her deadline. If you came back to this same recipe in a year, the person who wrote it could no doubt think of at least one or two tweaks, based on her current mood and ambitions, or new knowledge she's gathered.

All that aside, it's possible to test dozens, and more, variations of a single recipe. Take Mexican red rice. What tastes better: puréed fresh tomatoes or canned? If it's canned, should they be whole, crushed, chopped or fire-roasted? Should they be drained or puréed in a little bit of their sauce? For most of my recipes, I stopped the process when I thought the item tasted as it should, which usually took three attempts. One recipe, though, for homemade requesón (a spreadable Mexican cheese), took nine tries before I got it right. But even that didn't include all the possible variations, with different milks, varying acidic elements, or fresh herbs.

A Good Butcher is Priceless

I didn't realize until I started testing this book in the United States how much would be lost in translation at the butcher shop. In Mexico City, if you want to make tacos al pastor, you ask for "lomo." Technically lomo means loin, but in the U.S., that's the least fatty cut—absolutely not what you want for those tacos. (In Mexico, lomo can refer to the shoulder.)

The Colombian and Argentinean butcher shops in my neighborhood also have their own separate terminologies. I stopped by a Colombian butcher one day and told them I wanted to make tacos, and they told me to buy "pierna." I liked it, but the name confused me. Pierna means "leg" in Spanish, but this cut did not resemble the leg. It turned out to be pork butt, another term for pork shoulder. In the end, I found another butcher shop (the International Meat Market in nearby Astoria, Queens) where the staff speaks Spanish, English and Greek, and could help me sort out issues like this.

More Tales of a Cookbook Author 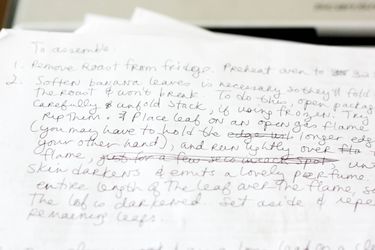 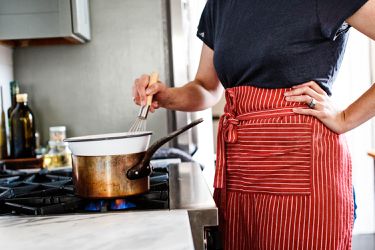 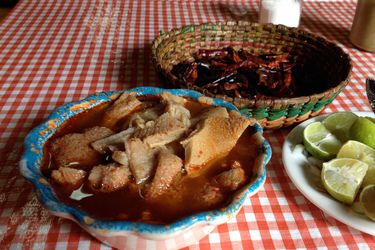