Sushi Week Part 1: A Sushi Style Guide and How to Make Sushi Rice

Note: It's sushi week at Serious Eats. We're kicking it off with a sushi style guide and notes on how to make sumeshi, the vinegared rice that makes sushi, well, sushi. Each day this week, we'll feature instructions on a different basic form of sushi-making. Why? Because that's just how we roll. —The Mgmt.

The term "sushi" is often synonymous with "raw fish" in many diners' minds but it in fact refers to the vinegared rice in the dish, not the topping or filling (which may or may not consist of raw fish).

Just like Spanish jamon, French confit or Korean kimchi, sushi was originally created as a means of preservation. At some point before the 16th century, it was discovered that salted fish packed in rice underwent a particular form of fermentation that not only preserved the fish, but created a whole host of the savory flavors prized by the Japanese and now identified as umami.

"It's really the Japanese version of the sandwich."

Fish would be preserved for a period ranging from several months to several years. The rice was discarded, and the fish was consumed either thinly sliced, or as a flavoring in other dishes. By replacing the fermentation process with a splash of vinegar and sugar and using fresh fish instead of fermented, modern sushi was invented in early 19th century Edo (modern day Tokyo).

It's really the Japanese version of the sandwich. Now, now, I know you're asking—what's meat between a couple slices of bread have to do with raw fish and rice? Well, just like sandwiches, sushi is a convenience food intended to be eaten directly out of your hands. In fact, when modern sushi was invented, it was served primarily out of street pushcarts, as theater concessions, or as snacks in gambling halls. Indeed, tekka-make (tuna rolls) are named after the tekkaba (gambling halls) where they were commonly served.

Though there are regional specialties from every corner of Japan (and even Korea!), this style guide will outline the six most common forms in restaurants and homes today.

Vinegared rice (sumeshi) is the most important aspect of any form of sushi. It's made by combining rinsed and steamed short-grain rice, rice vinegar (often flavored with kombu, or sea kelp), sugar, and salt. Balancing the sweet and sour flavors and achieving the perfect rice consistency are the challenges. The process for making sumeshi may seem a bit fussy at first, for anyone who appreciates sushi, the results are worth it, and the steps become simpler and simpler as you go on.

"Your sumeshi should come out slightly sweet and tart."

If all goes well, your sumeshi should come out slightly sweet and tart, full of distinct grains, and have a texture that holds together when compressed, but is not overly sticky.

If it all seems to go south, don't despair. Just remember that in Japan, there are young apprentices who take two years perfecting their sumeshi preparation!

In the meantime, I promise your results will still be perfectly edible, and probably delicious. Excited yet? You'd better be, because we just passed the point of nori turn!

Sumeshi recipe? Head this way »
Learn about sushi styles in the sideshow » 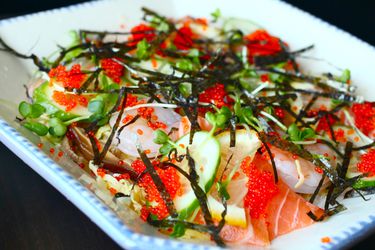