If you're lucky, America's best secret fruit might be growing on a tree close to your backyard. Or perhaps a county or two away. Finding it takes effort, but it's rejuvenating effort. Tromping around in the woods seeking pawpaws makes me feel more a little more human, and the pawpaw's enticing taste is only one of its rewards. What begins under a leafy canopy ends in your kitchen, with untold culinary possibilities.

What Are Pawpaws, Anyway?

"A pawpaw's flavor is sunny, electric, and downright tropical: a riot of mango-banana-citrus that's incongruous with its temperate, deciduous forest origins."

Pawpaw trees, the largest edible fruit trees native to North America, produce greenish-blackish fruit, usually three to six inches long. The flesh is pale to bright yellow and contains a network of glossy, dark brown seeds. A pawpaw's flavor is sunny, electric, and downright tropical: a riot of mango-banana-citrus that's incongruous with its temperate, deciduous forest origins. They also have a subtle kick of a yeasty, floral aftertaste a bit like unfiltered wheat beer. "The flavor of pawpaws is forceful and distinct," writes culinary historian Mark F. Sohn diplomatically in his encyclopedic book, Appalachian Home Cooking.

A pawpaw is a homely, unassuming thing on the outside; it's possible to unwittingly pass a tree laden with half a dozen of the things. But let's say you notice the pawpaws, and reach for a ripe one. The best way to enjoy a pawpaw is right there in the woods, tearing into it as if you had claws. Rip the skin away, slurp the pulp, and spit out the seeds. It's a gooey, sensuous, primal experience. You have now eaten from the tree of earthly knowledge, and guess what? It tastes really damn good.

Pawpaws grow from the Great Lakes down to portions of the Florida Panhandle. The members of the Lewis and Clark expedition ate pawpaws for pleasure, and, for a period in Missouri in 1806, subsistence. John James Audubon depicted yellow-billed cuckoos on a pawpaw branch. Our early American ancestors enjoyed pawpaws for centuries, spreading them as far west as Kansas. In 1541, the expedition of conquistador Hernando de Soto recorded Native Americans growing and eating pawpaws in the Mississippi Valley. And even though they had to clear pawpaw trees to create farmable land, white settlers savored pawpaw fruit—often the only fresh fruit available nearby. There are towns named Paw Paw in Michigan, West Virginia, Kentucky, and Oklahoma (Mid-Atlantic and Midwest states make up the pawpaw hot zone.)

But the more industrialized our country became, the less relevant pawpaws were. Pawpaws have had some public-awareness issues. An abundance of folksy nicknames, for one: Hoosier banana, Indian banana, custard apple, Quaker delight. That pawpaw means papaya in other parts of the world does not help any, either. (Despite Baloo's "Bare Necessities" shout-out in the Disney version of The Jungle Book, pawpaws are unrelated to papayas.)

But currently there's a groundswell, a pawpaw renaissance. The small but enthusiastic pawpaw community encompasses both professional and amateur growers, and it culminates at gatherings like the Ohio Pawpaw Festival, a laid-back event now in its 16th year, where family hula-hooping workshops and presentations on pawpaw propagation balance out a robust beer garden and music stage. Festival-goers queue up for free samples of pawpaw ice cream, a sweet and tasty introduction to the enticing possibilities of pawpaw cuisine.

Here's the catch: easy-bruising pawpaws have a short shelf life and don't currently fit in the business model of big agriculture. A scattered network of academics and horticulturalists are researching to see if that could change, if someday a growing and marketing strategy could make pawpaws an enticing new product in the produce aisle--the next POM Wonderful. Whatever the case, the far-flung, diverse, and loosely affiliated pawpaw scene is an exciting place to be right now. To be part of it, all you have to do is taste.

How to Get Your Hands on Pawpaws

Your options are grow, buy, or forage. Pawpaw trees are great for landscaping, and a grafted tree may bear fruit in two years, but they can be tricky. Growers of pawpaws don't tend to be run-of-the-mill people. They're analytical, curious, a bit eccentric, and often generous (I have never had so many swift and sweet responses to an email as my pawpaw query to the California Rare Fruit Grower's Society did.)

Let's assume you can't wait for fruit to grow. Ask around at your local farmers market if you're in the Midwest or Mid-Atlantic regions, where the odd dozen or so pawpaws may show up around September or October. It's not cheap, but you can have fresh pawpaws shipped to you in season, and frozen pawpaw pulp year-round. The specialty foods company Earthy Delights says that requests for pawpaws have gone up every year since NPR first aired a story about them in 2011. You can also go directly to the source and contact Albany, Ohio's Integration Acres, "the world's largest pawpaw processor." Founded in 1996, they use both their own pawpaws and ones from other growers and gatherers in the region, selling both frozen pulp and mixed-fruit 'pawpaw pops.'

By far the most fun way to get pawpaws, though, is to take to the woods and pretend you are a hunter-gatherer. I found my first pawpaws accidentally, while hiking within city limits of the Southeast Ohio town where I live. A ripe pawpaw lay squashed in the middle of the trail, revealing its bright yellow interior. I glanced up, spotted more pawpaws well within my reach, and unexpectedly entered into a torrid feral fruit love affair.

Pawpaws at the peak of ripeness simply fall from the tree, whereupon they get smashed and icky. So the key is to pick almost-ripe pawpaws, the ones whose stems break off with no resistance from the branch. They'll have a little give under the skin, like a perfect peach. The fruit on a pawpaw tree won't ripen all at once; the ideal pawpaw spot is one you can return to easily and often.

Let's say that's not the case. Don't freak. Some pawpaws are better than no pawpaws. This is edible natural history of North America. Just go with it.

How to Drink Pawpaws

When fresh fruit fails, seek beer. Pawpaw-flavored craft beer is a dynamic little pocket of the pawpaw world, and it's perhaps one of the most accessible ways to bring pawpaws to the people.

Jay Wince is president and head brewer at Weasel Boy Brewing in Zanesville, Ohio. They brew the Weasel Paw Pawpaw Pale Ale, an English-style pale ale flavored with pawpaw pulp. Like most brewers making pawpaw beers, they source foodservice-size buckets of frozen pawpaw pulp from Integration Acres. At Weasel Boy, they add the thawed pawpaw after fermentation to create a secondary ferment before filtering. "People look forward to it," Wince says of his pawpaw ale. A floral and yeasty brew with an unmistakable pawpaw finish, it's available on tap and in kegs only from May through September. "Unless you go to a specialized place, you're not going to just run across fresh pawpaws," he continues. "There are an awful lot of people from here who've never seen or heard of a pawpaw. They say, 'Does this grow here?' Beer can be a good ambassador and promotional tool for it. After trying the pawpaw ale, I've had customers bring fruits into the bar to share."

Like several other small Ohio microbreweries, Weasel Boy began experimenting with pawpaw beer at the urging of fellow brewer Kelly Sauber and Ohio Pawpaw Festival organizers (the Pawpaw Wheat Beer I had from Jackie O's Brewery at last year's festival kept me calm and contented while I stood in line with my daughter for an hour, waiting for her turn to request a free balloon animal.)

Wince doesn't expect pawpaw beers to conquer national markets anytime soon. "I think there can be a niche market, but never a wide application unless they change the way it's harvested and the product is more widely available. Pawpaw beers are a regional thing, a seasonal thing."

If you strike pawpaw gold—either in the woods or at a farmer's market—you need to have an action plan. Ripe pawpaws only last for two or three days at room temperature. They do well in the refrigerator for about a week if fully ripe, three weeks if a little underripe. (Firm pawpaws don't ripen well off the tree.) Tree-ripened pawpaws are best; soft, overripe ones tend to have off notes.

Unlike, say, mangoes, the custardy flesh inside a pawpaw is entirely too soft to be diced. Once you separate it from the seeds and skin, it's already a handy purée, almost like the pulp of a ripe hachiya persimmon. To extract it, halve the pawpaws with a knife and squish them with your bare hands through a colander set over a large bowl (an even better alternative is a conical strainer with a wooden pestle.) The pulp freezes well in a Ziploc bag for up to six months (refer to our guide to efficiently freezing and defrosting foods for best practices). It oxidizes quickly, so when storing pawpaw pulp in the refrigerator, stir in a little lemon juice and keep the air out by pressing plastic wrap directly on the surface. The pulp is best used within a day.

What next? The pawpaw's most distinct flavor compounds are volatile, so it's best to use it in recipes that don't expose it to heat: think frozen and icebox desserts, smoothies, or salsas. Make your favorite banana pudding, except layer in pawpaw pulp instead of banana slices. You can use a trusty mango sorbet or frozen yogurt recipe and swap pawpaws for the mango. Pawpaws sing with dairy products, so incorporating them with a panna cotta or just spooning some over a good plain yogurt always pleases.

One big exception to the no-heat rule is baking. Thanks to copious amounts of flour and sugar, pawpaw functions well in homey cakes, cookies, and quick breads, where its flavors are subtle. Long-cooked, homemade pawpaw preserves I've had mixed success with, though Integration Acres' pawpaw jam (which cuts the pawpaw with berries) is divine on a cracker with chevre.

The pawpaw's appeal isn't just its flavor. These lost-and-found fruits are both abundant and rare, and this puts those of us with heartfelt stakes in the Pawpaw Conspiracy in the strange place of wanting to get lots of people excited about a semi-secret, wild food. In five years, could pawpaws be the next ramps, eliciting sneers of disdain from trend-hoppers suffering pawpaw hype fatigue? I hope not, but if so, you'll still find me out in the woods, feverishly scanning the low, leafy canopy for just-ripe quarry to pluck. 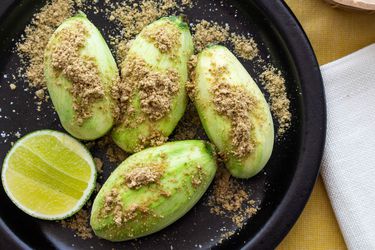