8064 SE 17th St., Portland, OR 97223 (map); 971-717-5271; pdxsliders.com
Cooking Method: Griddled
Short Order: Mini-burgers, not sliders, but a damn fine selection of them to be had at this food cart in perhaps the worst location in Southeast Portland.
Want Fries with That? If you can tolerate medium to high levels of synthetic truffle flavor, go for it. If not, do not partake.
Prices: 2.5-ounce mini-burgers, $3.50; fries, $2

I strolled up to the window on the side of the bright crimson cart without offering the adjacent menu even a cursory glance. "One of everything, please."

The cart's congenial owner, Ryan Rollins, reacted with only the slightest lift of his eyebrows, followed by an approving nod. "One of everything, got it," he repeated, entering the order on his Square-powered iPad. "That'll be $30.50." At $3.50 per item ($2 for fries), it's cheap to splurge here.

Open for just a few months in Portland's Sellwood neighborhood, PDX Sliders suffers the unfortunate drawback of being wedged between the back of a 7-Eleven and a busy car wash on a noisy stretch of road. The cart has but a single picnic bench to offer for seating, which is probably plenty, because it's hard to imagine anyone wanting to stick around and eat there. The fumes from the car wash's cleaning solution and drifting spray from the high-powered hoses are two ample reasons to grab your food and skedaddle.

A second (some might say petty) demerit levied against PDX Sliders concerns the fact that the cart does not sell any actual sliders—they sell mini-hamburgers. As Adam Kuban succinctly put it back in 2008, a slider is "a thin slip of beef cooked on a griddle with onions and pickles piled atop patty. The steam from the onions does as much cooking as the griddle. The buns are placed atop the onions, absorbing the pungent aroma and flavor." It may be pedantic, but I would be remiss not to make the distinction (particularly with astute Serious Eats readers on the prowl).

Semantics and lousy location aside, is PDX Sliders worth your time? I say it is, if you order correctly.

The menu consists of seven mini-burgers and sandwiches, all named for one of Portland's many bridges, as well as a rotating special. Any meal at PDX Sliders should start with the Sellwood, the cart's most basic yet most satisfying burger. The 2.5-ounce patty made with Cascade Natural beef comes out juicy with a spectacular crust after being cooked medium well, and it receives a major flavor boost from sharp Beecher's Flagship Cheddar and smoky bacon. Caramelized onions, crunchy butter lettuce, and housemade aioli on a soft Portland French Bakery brioche bun round out the burger, which you should be able to finish in about three or four bites. It hits all the same notes as its larger brethren, but in compact form.

Sure to polarize visitors to the cart is the Hawthorne, which sees its beef topped with bacon, Portland Creamery goat cheese, and Glenmore Farms strawberry preserves. While marrying sweet and savory often elevates both in splendorous harmony, in this instance the preserves overpowered the proteins, resulting in something that most closely resembles a jelly sandwich.

Things get back on track for the Steel, a double-pattied crowd-pleaser with that same great smoky bacon, white American cheese, caramelized onions, and aioli. It's simple, flavorful, and probably the best value of any of the burgers available.

The Burnside is where we start to diverge from the strictly beef offerings. It starts with a pork meatball smashed flat on the griddle, followed by roasted roma tomatoes, baby arugula, a smear of garlicky aioli, and a very generous draping of melted mozzarella from Full Circle Creamery. Resembling neither burger nor meatball hero, the Burnside shines on its own merits and is one of the better sandwiches on the menu.

Like cumin? Then you'll definitely want to get your hands on a Broadway. With a griddled heap of shredded braised pork at its heart, it's a spicy, cumin-heavy alternative to a pulled pork sandwich. The sturdy ciabatta roll holds up to the flowing juices without becoming a burden to chew.

For the vegetarian in your party, you have two options, the first of which is the St. Johns. Herbed goat cheese, a marinated portobello mushroom, and sweet roasted roma tomatoes all tasted great individually, but together in the St. Johns the goat cheese easily overpowered the vegetables and 'shroom. Still, it's definitely preferable to the second vegetarian option...

...the Ross Island. Anchored by a black bean chipotle patty and garnished with Tillamook pepper jack and butter lettuce, the Ross Island managed to be both bland and unpleasant. A mushy puck of underseasoned black beans and chipotles comes across devoid of flavor at first taste, but then slightly off notes of funk arose, prompting me to stop after the first bite. Not recommended.

A recent special, a blackened chicken sandwich topped with a crisp cabbage and apple slaw, was a winner. The chicken breast hadn't dried out as it is wont to do, and the intense seasonings provided a nice foil to the clean flavors in the crunchy slaw.

Your opinion on the PDX Fries ($2) hinges on your tolerance for the flavors of truffle oil. The hand-cut Yukon Gold fries are too limp to claim greatness, but the dusting of fresh parsley and truffle salt assure that they're anything but boring. I am very sensitive to truffle products, and the severity of their application determines my palate's reaction in the positive or negative. Over at Little Big Burger, the fries are sprayed with a very light, diluted solution of truffle oil, and I think those are the best fries on the planet. Here, the truffle salt delivers more concentrated truffle oil flavors, so I was somewhat less enamored with them.

PDX Sliders is a battlefield of hits and misses, but the hits (the Sellwood, Steel, Burnside, and Broadway) outweigh the misses. They may have the worst real estate of any food cart in Sellwood (Rollins hope to eventually move to a brick-and-mortar space if all goes well), but it's the best excuse yet to find yourself standing in the parking lot of a car wash. 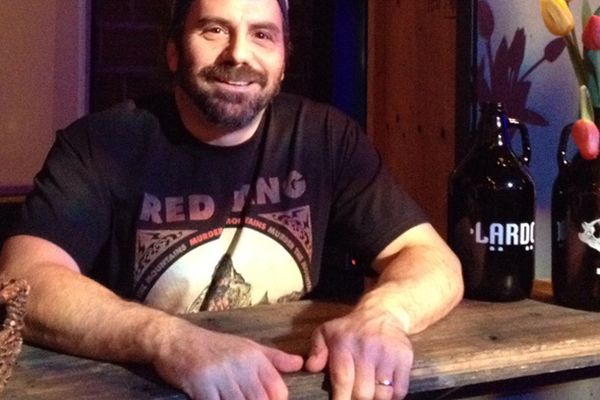 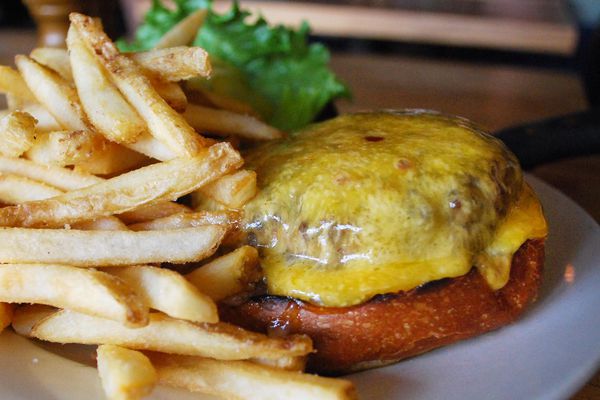 Returning to the Burger's Essence at Grain & Gristle in Portland, OR 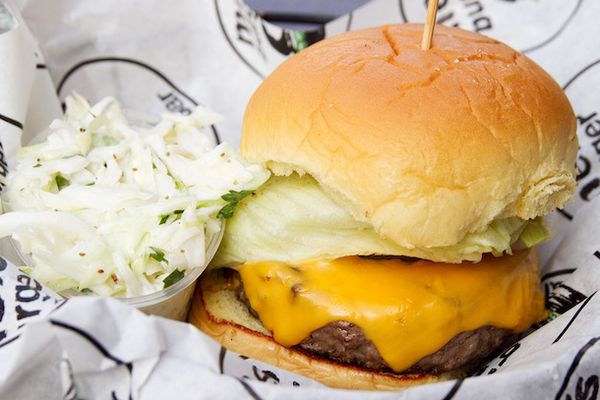 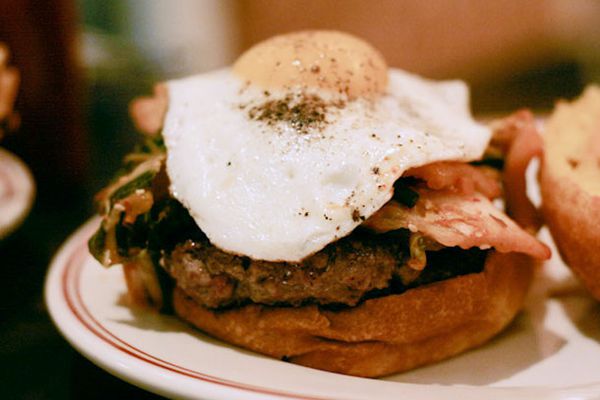 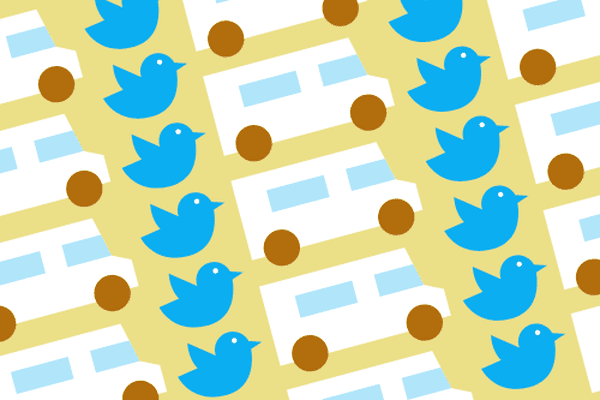 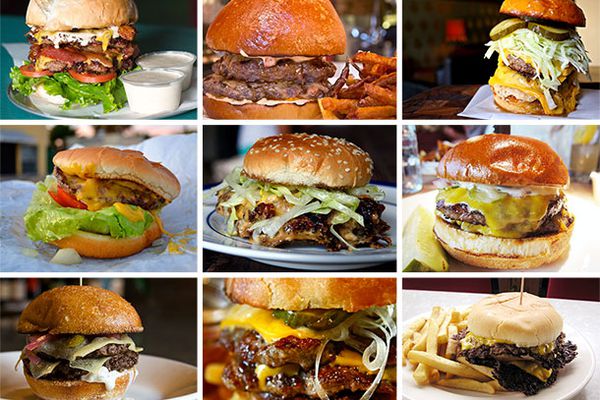 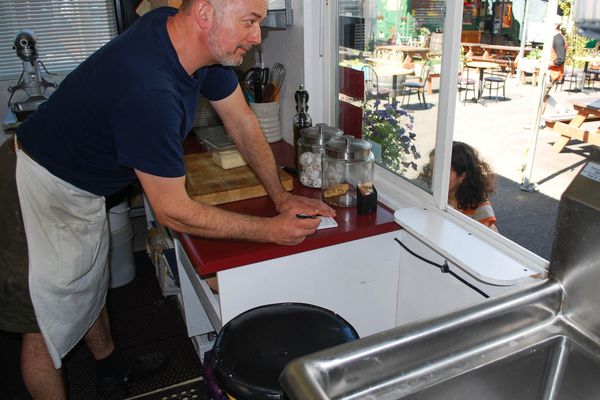 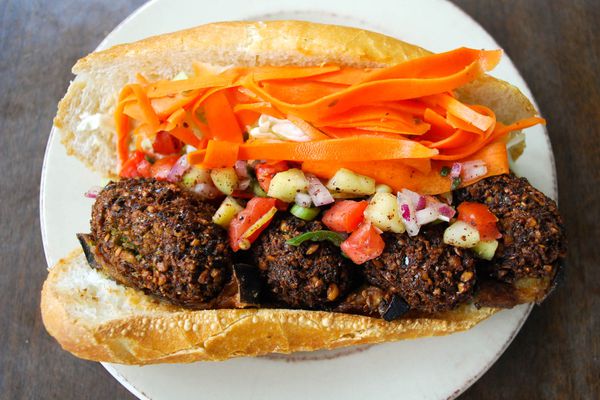 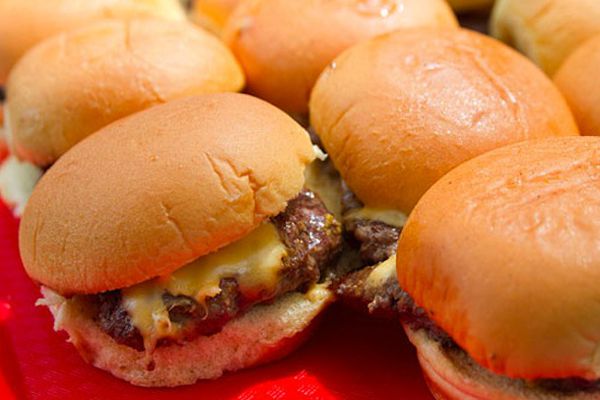