Well, like it or not, the nefarious future is here to ruin things again. All good things must come to an end, as they say, and so too must this mortal coil of ours perish into nothingness. And if we ever get the chance to look back upon it all, we'll have to admit that it wasn't nuclear war or pollution or superviruses that did us in. No, we'll laugh bitterly—we fell at the feet of a $3 gas station burrito.

Not just any old pump-n-pay snack, mind you, but hormone- and antibiotic-free burritos, made with cage-free eggs, and offered at $3 a pop from a 24-hour kiosk known as Burrito Box. You've probably heard of the Burrito Box. The brightly-tinged vending machine sprouted up mysteriously inside of a 24-hour Mobil gas station in Los Angeles recently, and has managed to attract quite a bit of press, even though its parent company, The Box Brands, has remained villainously quiet. And, as if to prove a point about the world's inevitable slow decline at the hands of laser-wielding Bond villains and reheated Mexican foodstuffs, the Colorado-based company that supplies said hormone-free burritos is named... EVOL. Seriously.

There's simply no stopping the Burrito Box now, what with its superior heating skills, uncanny combinations of eggs and breakfast meats, and triptych of possible accompaniments—Tabasco hot sauce, sour cream, and guacamole—that can accompany any purchase. That is, unless the burritos actually taste like, y'know, gas station burritos. In which case we may all be able to rise up and declare in one voice that "We will not go quietly into the night! We will not vanish without a fight!"

But there's only one way to find out how ready these burritos are to take over the planet. We must try them all.

Here is the initial offering, and my first sign that things wouldn't end well. These burritos aren't actually cooked to order through some feat of biothermal engineering. They're actually just heated up to sort-of-room temperature.

From the on-the-go squirt of sour cream to the neon cup of pressed guacamole, the sides don't deliver much, either. (Though that dinky bottle of Tabasco is pretty darn cute.)

And now, onto the burritos. I will spare you close-ups of all but the best in the bunch, which was still only passable. Behold:

Uncured Bacon, Egg and Cheese Burrito (top left): Please, look away. This soggy, chewy mess is supposed to be a smoky, savory bite of bacon, eggs and cheese. And that little flap of red? It's the remaining skin from a peeled and crushed tomato, begging to be set free.

Roasted Potato, Egg and Cheese Burrito (top right): A good thing to always keep in mind: don't order eggs from a vending machine. Especially if the next strongest flavor to accompany them is 'boiled potato.

Chorizo Sausage, Egg and Cheese Burrito (bottom left): Closing out the breakfast options is the chorizo and egg, though this is less the Mexican morning staple than it is a traditional American breakfast link. There's a bit more to sink your teeth into, but the whole thing is still exceedingly chewy and moist. Maybe this Burrito Box isn't so intimidating after all.

Shredded Beef and Cheese Burrito (bottom right): Hmm, a better option. Though the beef is bland, it's a large step up from sweaty eggs. This won't beat out any machaca burrito you might try elsewhere, but at least its worthy of its gas station setting—and $3 price tag.

Free-Range Chicken, Bean and Rice Burrito: Finally, the best of the bunch. There's chicken that tastes like chicken (albeit in faint amounts) and other discernible bites like corn, beans and rice!

Suffice it to say, after much strenuous research, the Burrito Box will not be coming to take over the world after all. But it may keep on clogging up LA's Instagram feed. 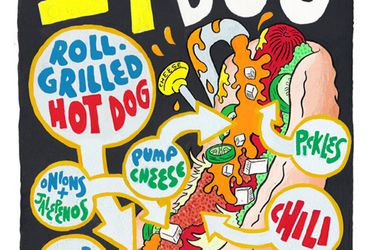