I do not like kettle-style potato chips, which shoves me into a very, very small minority at Serious Eats World Headquarters. I grew up on thin-cut Wise and Lay's chips. Blond, salty, not-too-potatoey-but-ultra-crispy chips, that is. When kettle chips started gaining popularity in the late 80's and early 90's, I thought, "These people are crazy. Nobody wants so-crunchy-it-cuts-up-the-roof-of-your-mouth chips with dark, burnt flavor."

Turns out I was wrong, but personally, I'll still take an old fashioned Lay's over a thick-cut kettle chip. Anybody else with me on this?

Knowing this, it may seem odd that my favorite brand of chips in the whole wide world is Zapp's, a kettle-cooked brand that started back in 1985 in New Orleans. What makes Zapp's different? Well, for one thing, they aren't so thick that they embed in your gums when you bite into them. Secondly—and more importantly—they're cooked to a nice golden blond and heavily seasoned. None of the bitter dark brown spots; they pack all the delicate flavor and overt saltiness of a Lay's or a Wise chip, with just a bit more crunch to 'em. For me, that's a recipe for success.

The other great thing about Zapp's: the flavors. They're unique, to say the least. Here's a rundown of every flavor in their lineup.

The chip that started it all. Blond, crunchy, salty, and delicious.

One of Ron Zappe's earliest experiments, they're the company's most successful flavor by far. Imagine the flavor of a full-on crawfish boil— the hit of tangy hot sauce, the aroma of seasoned salt boiling away in a pot, the kick of cayenne pepper—and pack it all into a single, crunchy, bite-sized chip. They're also availabe in Louisiana State University-branded packaging, sold as LSU TigerTators.

Most barbecue chips taste more like sweet Kansas-city style barbecue sauce—all molasses and spices. Zapp's tastes like real-deal smoke, the sweetness and spices only coming in as supporting cast. As Zapp's says, "It'll make ya want to kiss your horse... or spouse... or both." I'm not sure what that means, but I understand it perfectly.

Screw Kettle-brand chips and their oddly sweet, not-too-spicy jalapeño chips—Zapp's Hotter 'N Hot Jalapeño are the real deal. Spicy, and tangy, they remind me of pickled jalapeños in the nicest possible way. Be careful, the heat builds on you.

Uh... I liked these so much that I ate them on the plane and completely forgot to take a photo of the bag. 'Doh!

Anyhow... Dill pickle chips are not that common around these parts, but when I see a bag, I'll snatch 'em up as quick as I can. They combine the vinegary tang of salt and vinegar chips with a hint of dill. Zapp's goes the extra mile by adding a bit of chili spice to theirs as well for some real Cajun kick.

The least inspiring of the flavors, it's a fine chip for sour cream and onion fans, though I'm not exactly sure what makes their onions "Creole."

Woohoo! A salt & vinegar chip that really delivers! Most vinegar chips leave me wishing for more mouth-puckering acidity and more salt. These ones hit you, and hit you hard with a relentless vinegar attack. They should put an exclamation point after their name.

It didn't qualify to compete in our salt and vinegar potato chip taste test due to its limited distribution, but I've no doubt it would have ranked highly.

Ah, Voodoo Chips. I still remember the first day I tasted you on that hot and muggy Louisiana afternoon out in Lakeshore. The result of an accidental mixture of seasoning from all their other flavors combined, it starts off with the vinegary nose of a salt and vinegar chip before settling down with the smoky sweetness of barbecue. There's a sharp, fresh, jalapeño-like finish, and perhaps a touch of that Old Bay aroma that lingers after you've made it about halfway through the bag. Voodoo chips, you've put a spell on me.

Zapp's are available online and in many retail outlets.

Any other Zapp's lovers out there? 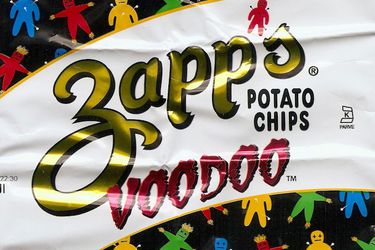