Perhaps it's just me, but doesn't it feel like Rick Bayless is always working harder than everyone else? Not only does he do so many different things—run restaurants, write cookbooks, create a line of Mexican goods, win cooking competition shows—he appears to do all of them so well and with so much enthusiasm. He could have easily cashed in on his empire years ago, franchising restaurants across the country, yet even though he has slowly expanded over the past few years, the quality of everything he does still remains absurdly high. That's definitely the case with Xoco, his "casual" Mexican eatery, where the churros are always freshly fried, the hot chocolate is made from cacao beans roasted in-house, and the tortas—the main focus of this post—are crafted with exacting care.

Xoco doesn't try to reinvent the torta, instead preferring to roughly follow the same formula as most versions of the Mexico sandwich: rolls (usually either bolillo or telera) get a smear of refried beans, some well-seasoned filling, and salty cheese, before getting topped by any vegetables and salsa. Often the finished sandwich is toasted or grilled, which crisps up the exterior of the roll. The result, when done right, is a sandwich with a variety of unique textures and temperatures, with some spice to cut through it all.

I've loved every torta I've tried from Xoco over the years, but which one is best? To figure out for sure, I decided to taste all the options side by side, hoping that this would allow me to tease out the best options from the pack.

Turns out picking favorites from a lineup like this has more to do with your personal preferences than any sort clear-eyed criticism. In short, they are all pretty awesome—which isn't exactly the most articulate thing I've ever written down, if still true. How does Bayless do this? Why are the sandwiches all so good? Here are my four theories:

1. Great Bread: Most of the fillings are served on gorgeous bolillo rolls, which were specially developed for Xoco at Labriola Baking Company. As has been documented elsewhere, the bread is slow-fermented for 12 hours, which explains the unique flavor and slight acidity. Instead of passing these through one of those conveyer-belt ovens, they are warmed in the restaurant's wood-burning oven, which adds faint smoky aromas. Two of the sandwiches are served on telera rolls (also baked at Labriola), which are softer and better suited to crisping up on a griddle press.

2. High-Quality Ingredients: Rick Bayless is an avid supporter of the Green City Market, Chicago's only year-round sustainable market, and the menu mentions a number of ingredients from farmers you'll find weekly at that farmers' market. But sourcing is only one aspect of the equation. These raw ingredients are uniquely prepared, not simply cooked the same way.

3. Solid Sandwich Construction: Instead of stuffing the tortas with as much as possible, each one is uniquely topped with just a few very flavorful ingredients. The insides of the bolillos are also carved out, which makes them both easier to eat and more structurally sound. Restraint is the name of the game for the tortas made with the telera rolls. Sure, some are a bit messy, but you'll never have to worry about the of the rolls collapsing in half from the weight.

4. Serious Salsas: As you'd expect, each torta is served with salsa on the side. But instead of an afterthought, the salsas are tailored to play off the fillings. So the crunchy Milanesa is served with a creamy tomatillo-avocado salsa, while the smoky and meaty pepito gets a bright and tart tomatillo salsa.

I tried all eight tortas on the regular daily menu. I should note that each day there is a different special, but since I wanted to try them all side by side, those will have to wait for later. Okay, that's enough chat. Let's get to the tortas.

I've already stated above that I'm refusing to pick a favorite, but there is little doubt which one surprised me the most. Most of the tortas are warmed in the wood burning oven, but a couple, including this one, are toasted on a griddle. Instead of squashing the bread (which would leave each bite dry and crumbly) the exterior is toasted to a beautiful golden brown, but the interior still has some give. Stuffed inside is a fried chicken cutlet that manages to stay extra-crunchy for an improbably long time. Its topped with a thin layer of Jack cheese, pickled jalapeños and red onions, Napa cabbage, and black beans. On the side is a tart and smooth tomatillo-avocado salsa.

It's a feast of textures and temperatures—creamy, crunchy, crispy, spicy, and genuinely satisfying. That it's also compact and easy to eat is something of a major engineering feat. Okay, I take it all back. This one is probably the best.

Besides the Milanesea, this was the one that surprised me the most. Perhaps I'd never tried it because I thought the chicken option would be boring, but that was my loss. There's no doubt that Xoco has some serious poultry skills. Empty your brain of all the dry chicken breast sandwiches you've ever eaten, and get ready for this extra juicy offering. It starts with large hunks of chicken, which are well seasoned and flavorful. The Baja moniker means that it gets a covering of crunchy cabbage and radish slaw, along with a generous swipe of chipotle mayo. The sandwich comes with a fierce red chile salsa, which is incredible, but not completely necessarily.

Before this taste test began, this is the one I figured would come out on top. And who knows, if I hadn't already tried this one a few dozen times, it might have surprised like the two mentioned above. Regardless, it's an astonishing sandwich. It's stuffed with a crispy hunks of full flavored carnitas, which are balanced (somewhat) by a pile of pickled onions. It's great as is, but the final flourish is an arbol chile broth, meant for dunking. Though deep red, it's not as spicy as it looks, adding more earthiness than spice (though there is some of that, too).

I got all the sandwiches to-go, so I could sample them at the same time. That explains why the broth came on the side. At the restaurant, the sandwich is served with the ends of the sandwich already in the liquid.

Xoco skips on a standard steak offering, and instead goes with the braised short ribs, which are deeply beef and also tender. There's a bit of melted cheese, but not too much. Instead, the sandwich is mostly about the interplay between the beef, the sweet caramelized onions, and spicy pickled jalapeños. More than most of the offerings, there is a pleasing smoky aroma to each bite, which is really appealing. A red and rustic red chile salsa would further accentuate the flavors, but Xoco instead goes in the opposite direction with a bright and tart tomatilla salsa—a great move.

I wasn't expecting to enjoy this offering as much as I did. Sure, I adore chorizo, but there looked to be so much of it. Wouldn't every bite be overly fatty? But the intricately spiced house-made chorizo brings more flavor than grease. What about the generous amount of melted Jack cheese? It's tangy and salty, pairing nicely with the chorizo. Plus, underneath the cheese are some roasted poblanos, which provide an unexpected smoky and spicy element to each bite. Once again, tomatillo salsa adds a fresh kick to this solid offering.

Besides the Ahogada, this is the torta I've tried the most. It's easy to understand my affection, especially since this achiote-stained version of cochinita pibil uses suckling pig as the base. This is paired with a generous pile of pickled red onion, which adds crunch and a nice bit of acid. This torta's curveball is the salsa. As you'd expect from a dish that originated in the Yucatan, it's served with sinus-clearing habanero salsa. If it only offered numbing heat, that would get old fast, but it is far more complex than that, bringing an unexpected citrus element. Honestly, it's so good you want as much of it as possible, until you realize that the bread is drenched from your tears. Be careful with this stuff—it's serious. But if you love spice and the incredible variety of flavors associated with the habanero, this is a must try.

Few things in life are as consistently underwhelming as a veggie sandwich, which probably explains why this fantastic option is so genuinely beloved. River Valley Ranch mushrooms are roasted until juicy and inky, and then piled on a roll with funky and salty goat cheese, bitter wild arugula, and a chipotle-garlic mojo. Needless to say, each bite takes your taste buds in a bunch of different directions, which is only accelerated by the 3-chile salsa. Sure, this makes for a perfectly legitimate vegetarian option, but carnivores should love this one, too.

This play on a Cuban sandwich is the other griddled option on the menu, and while it doesn't quite have the same kind of exciting contrasts that made the Milanesa such a thrill, they can't all swing for the fences, right? This is the most compact offering of the bunch, with thin layers of smoked pork loin, bacon, black beans, and avocado, all held together with a layer of melted Jack cheese. Like any good Cuban sandwich, there is mustard, but it's also mixed with chipotle, creating an even more assertive spread. It's hard to find any fault here.

Oh, Yeah... Everything Else is Great, Too

While tortas make up the bulk of the menu, every other item on Xoco's menu is worth your time. That's especially true of the hot chocolates, which are unlike any other cup in town. Xoco actually roasts its own cocoa beans, resulting in sips that are intricate and multi-layered, instead of simply sweet and thick. And don't forget about the brimming bowls of caldos. And the churros. And every other breakfast dish. 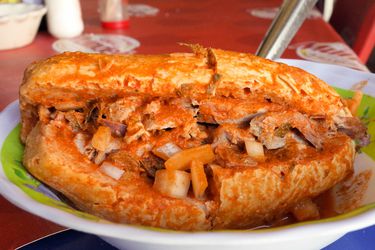