After you've done fried a couple turkeys and born witness to deep-fried pepperoni, there aren't too many things that get thrown into a deep fryer that will shock you. Nevertheless, shocked is how I felt walking into Jimmy Buff's last week and watching them prepare a double Italian Hot Dog when Carey and I were touring around New Jersey in the Serious Eats Explorer (thanks Ford!). That would be two skinless franks, deep-fried until bursting, stuffed into a split loaf of "pizza bread" smeared with mustard, topped with fried onions and peppers, and fat disks of fried potato.

I mean, deep fried hot dogs are one thing. My wife loves them. Fried potatoes to go with that? No problem. I mean, she can basically subsist on salchipapas, the South American dish of fat french fries with deep fried hot dog nuggets (yeah, it's awesome). But I wasn't prepared for the sight of such a vast pool of barely simmering dogs and potatoes swimming in an onion- and pepper-scented pool of oil. It's truly a sight to behold, and one that's worthy of its own video, I believe.

Carey was a bigger fan of this sandwich than I was—at least her first bite of it. I mean, it was tasty and all, but for me the stuff-to-bread ratio was off. I ended up picking out potato chunks and bites of hot dog with a fork, leaving a lot of the massive hunk of pizza-bread behind.

Sounds like there are a lot of Jimmy Buff's fans out there—but are there other Italian Hot Dogs that get this whole ratio better? It's a great concept—I've been saying for a while now that there aren't enough crispy-potato-in-sandwich-form creations (which gives me an idea for a future Food Lab...) 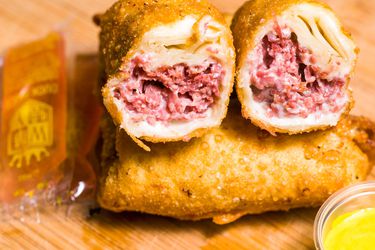