"This smells like home," my wife Adri said the other night as I opened the lid of the pressure cooker.

You may have heard of ajiaco, the Colombian potato and chicken soup, but chances are you've never heard of ajiaco negro, its vegetable counterpart made with potatoes and fava beans and flavored with corn, carrots, and peas. Actually, most people in Colombia have never heard of ajiaco negro. I'm not even convinced that anyone outside of Adri's immediate family has heard of the dish. Heck, I'd never even heard of it until my wife's Aunt Gloria showed me how to make it on our most recent trip to Bogotá, despite the fact that it was apparently Adri's favorite soup growing up. We learned all the mundane details about each others' lives before we got married—life goals, dreams, ambitions—and it would seem it's only now, half a decade in, that we're finding out the really important stuff about each other.

When you're married to a Colombian woman from Bogotá there are some things you've got to know. How to drink aguardiente at the original location of Andrés Carne de Res like a pro (and hide the hangover from the in-laws, even when it's exacerbated by the thin air 8,000 feet up in the Andes). How to do that thing where your feet and butt move more than your shoulders when dancing salsa. How to distinguish between more types of passionfruit-like fruits than you can possibly imagine. And understanding that soups are not just an appetizer or even a main course, but a way of life.

Lunch is the main meal of the day, and no lunch is complete without a hearty soup. You go to a party and hot bowls of caldo with slivers of potato are passed out at 2AM to make sure that everyone has the sustenance they need to make it home safely. Roadside restaurants selling grilled or barbecued meats will invariably have a large, beat-up stock pot filled with lava-thick cuchuco or meat-packed sancocho slowly bubbling over an outdoor wood fire.

The nice thing is that Colombian soups are an inherently simple affair. Almost all recipes I've seen follow the basic dump-things-in-a-pot-and-simmer formula. No sweating, no sautéing, no complex strained broths or stocks, just simple ingredients and a lot of time. This 100% vegetarian recipe is an oddity in Colombia, where most soups contain big chunks of simmered meat and bones. This is good news if you're in a hurry: it cooks in just the amount of time it takes for potatoes to fully tenderize. Throw it in the pressure cooker, and you've cut your time down to under half an hour start to finish.

The ingredients list is short: potatoes, carrots, corn, fava beans, peas, and broth (I'd recommend using homemade vegetable stock or Better Than Bouillon vegetable base or No Chicken Base. Avoid store-bought vegetable broth which is never very good).

With ingredients like favas, peas, and carrots, you may think this is a light spring dish, but it's not. When my aunt-in-law makes it in Colombia, she uses the local favas and peas which are invariably of the older, starchy variety. When I'm making it at home, I use winter shell peas or large frozen peas. Fresh favas aren't widely available (especially in the winter), so I tried making the dish with both dried favas and with canned favas. Either works, though canned favas are easier. I add half of the cooked favas and peas right from the start, reserving the rest and adding them for a quick five-minute simmer just before serving. This gives you nice vegetable flavor in the soup base itself, along with some fresh green color and flavor at the end.

As with the peas and favas, this is a case where you actually want to use less-sweet winter corn. The corn in Colombia is large-kerneled and extremely starchy. Served in the soup with a little fork for picking it up, it acts almost like a soup sponge, the thick broth sticking in between the kernels and coating them with flavor. Starchy winter corn is not quite as large-kerneled, but it picks up flavor in the same sort of way.

The best part of this soup is its texture. By cooking the potatoes until completely tender, then stirring them vigorously with a whisk, they begin to break down, their starch thickening up the soup in a way that is simultaneously light on the palate yet hearty by nature. It's also pretty nice that there's no added fat whatsoever, if that's the kind of thing that generally concerns you.

Now that I know how to make Adri's favorite food, I must know all there is to know about her, right? 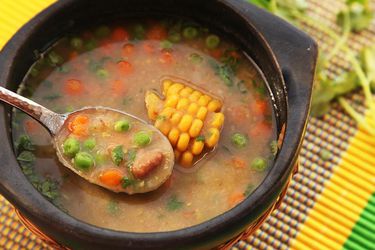