Qorma is a method for braising meats and vegetables that originated in the kitchens of the Mughal Empire, which dominated the Indian subcontinent from the 1500s until the late 1800s. Also spelled korma or kurma, the method lends its name to a variety of dishes, and it's similar to the European method of braising.

The main difference between qorma and Western braises, aside from the use of an array of fragrant spices, is the character of the resulting sauce. Qormas are typically made with cream, yogurt, coconut, and/or ground nuts, all of which yield a luscious and velvety sauce to accompany the braised meat or vegetables. The dish is then garnished with fried nuts, dried fruit, or even thin slivers of silver foil called varak, which is often used when qormas are served as part of a celebration or event.

This technique is used to make stand-alone braised dishes, like the recipe for vegetable qorma I've provided below, but it can also be used as one step among others in dishes like a pulao or a lamb biryani. Since it's a fundamental technique of royal Mughal cooking, it can be used with a variety of ingredients; the possibilities are endless.

There are two main parts to making a qorma: building the sauce and then simmering the ingredients that will be served in the sauce.

How to Build the Sauce for Qorma

Fat. Ghee is the fat of choice here, as it has a lot of flavor and a nutty, caramel-like aroma that complements the yogurt I use in this qorma. You can also use a neutral vegetable oil like grapeseed, but even extra-virgin olive oil is a good option.

Thickeners. A qorma is defined by its thick sauce, and you have a choice of thickeners you can use, which will vary from dish to dish. Grated coconut and cream are often called for, as are nuts, which are rich in proteins and fat and, when ground and cooked, they offer both flavor and thickening properties in abundance. For this qorma I use a combination of cashew nuts and white poppy seeds.

Poppy seeds are used in Indian cuisine not only for the texture when added to breads and for their thickening porperties, but also for their fragrance and flavor. I find it hard to describe the flavor of cooked ground poppy seeds; it’s slightly peppery but toastier than pepper (if that makes any sense). For sauces like qormas, white poppy seeds, also known as khus khus (not to be confused with the fragrant vetiver or khus grass that is used to make a vibrant, green-colored cooling sweet drink in India) are also used, as they give the sauce a smoother look, without any dark speckling, similar to the way in which white sauces often call for the addition of white pepper instead of black. It’s mostly visuals and won’t affect the taste. White poppy seeds are available online and in Indian grocery stores.

Onions. Onions are used to make the base of many sauces, not just qormas, and while they're often fried to a dark brown, in this sauce I choose to skip the browning step, preferring instead to cook them slowly over low heat while covered, which makes them tender while also bringing out their sweetness. I've also found that the lavish use of spices in this recipe mask the flavor of browned onions.

Dairy. While many qorma recipes call for adding cream, this recipe relies on full-fat yogurt for its dairy element. However, rather than simply adding the yogurt all at once, I add it in small batches and cook each addition until the water evaporates and the fat separates. The milk proteins denature and eventually, along with nuts, they constitute much of the body of the qorma’s sauce.

Spices. A combination of whole and ground spices cooked in hot oil is essential for giving each qorma its character. The heat draws out the fragrant essential oils in the spices and the fat acts as a solvent, capturing them in the sauce. Whole spices can be removed and displayed on the dish after cooking or removed and discarded. Turmeric isn't entirely necessary; some versions of vegetable qorma omit it, and the result is a pale and creamy sauce. However, for this recipe, I call for adding turmeric as it gives the sauce a beautiful golden color.

The beauty of this qorma is that it can happily accomodate a large variety of vegetables, and so the choice of vegetables is up to you. Carrots, green beans, peas, carrots, cauliflower, sweet corn, broccoli—any of these vegetables will be delicious when cooked in the sauce. However, you want to be sure to cook the vegetables so they're tender but still retain some of their structural integrity. For even cooking, it's critical to cut all the vegetables into pieces of a consistent size, preferably on the smaller side, as that reduces the overall cooking time.

I call for adding paneer to this qorma as well, which gives it a little extra richness and textural complexity. To further enhance the flavor and texture, I fry the paneer first in the fat, removing it before proceeding with the cooking of the onions and the addition of spices. You can skip this step entirely and simply add the paneer along with the vegetables, if you like.

To finish this qorma, I’ve kept the garnishes simple, but you can go wild. I fry dried golden raisins alongside whole nuts in hot fat and then pour the mixture over the finished dish, essentially a tadka. You can also garnish the qorma with fresh herbs like cilantro or mint and, if you can get your hands on it and would like to add a little luxurious visual florish, the delicate fine sheets of edible silver foil called varak. 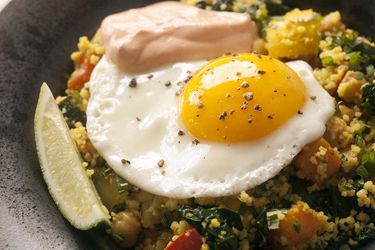 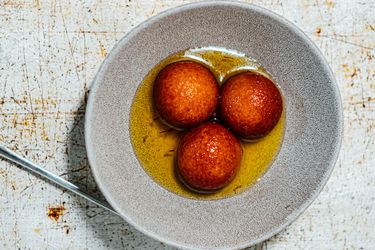