A celebratory meal of aromatic and spiced rice and tender braised vegetables.

A biryani is meant to be extravagant. Brightly colored, intoxicatingly aromatic, and rich with flavor, biryani is often served at celebrations, and this is true not only of biryanis made with meat, like the lamb biryani I've written about previously, but also of vegetable biryanis, like the recipe below.

Vegetable biryanis take far less time to prepare than ones that include meat, and while I rarely make meat biryanis on weekdays, a vegetable biryani is perfect for a mid-week meals, particularly if you have some unexpected company coming over for dinner. Vegetable biryanis are an excellent example of how paying careful attention to a few simple techniques can yield a dish that's not only appropriate for a celebration, but is deserving of a celebration in itself.

The Best Kind of Rice for Biryani Is Basmati

Biryani is a rice dish, and it's very important to use basmati rice when you make it. A long-grained rice that is commonly used across the Indian subcontinent, basmati rice is foundational for biryanis because it has two unique characteristics.

The first is that it is quite aromatic, which is due to the fact that it contains an aroma molecule typically referred to as 2-AP, which stands for 2-acetyl-1-pyrroline. (The same molecule is present in pandan water, or kewra water, which is often added to biryanis to heighten their aromatic complexity.) The aroma of basmati rice increases as it ages, and you'll notice that basmati rice brands will often indicate that their products have been "aged" to emphasize their quality.

The second is that basmati rice has a distinctly different starch makeup than other kinds of rice, like the short-grain rice that's widely used in East Asian countries. There are two main kinds of starch, amylose and amylopectin, and basmati has a relatively higher proportion of amylose than other forms of rice. When cooked, that means basmati's long grains don't get as puffy or sticky as short-grain rice; instead, the grains of basmati expand in length as they absorb water and are cooked, which gives the rice, and the biryani it's used in, a feathery and light quality.

To further accentuate these qualities, I parcook the rice in water with added lemon juice (citric acid) and fat. The citric acid helps to prevent the rice grains from splitting as they cook and the fat helps to keep them from sticking to one another.

Building the Flavor Base of a Biryani

The base flavor of a biryani comes from a qorma, or braise, and the first step of many qormas is browning a large quantity of onions. The browning step is important both for flavor and aroma: As the onions heat, caramelization (a flavor-producing reaction that involves sugars like fructose and glucose) and Maillard reactions kick in, which help produce bittersweet notes and brown colored pigments in the sugars. The darker the browning, the stronger the flavor of the onions, but be careful: if they turn dark black, they will taste unpleasantly bitter. Pan-fried onions produce aromatic ketones that are not seen in raw or other types of cooked onions.

The choice of cooking fat is important, too. Just as with a qorma, the preferred fat is ghee, which provides nutty notes of butter flavor and contributes to the aroma of the dish as the lipids undergo oxidation to produce aromatic molecules. A neutral oil such as grapeseed oil can also be used, but it's distinctly less flavorful and aromatic.

For this recipe, I remove half of the onions after they've browned and then add dried apricots, cashew nuts, and golden raisins to the onions still in the pot, so they plump up and crisp. I then remove the onion, dried fruit, and nut mixture and reserve it to garnish the final biryani. The onions I initially removed from the pan go back into the pot, and, when combined with spices, they form the flavor base of the qorma.

Biryanis often include a range of dried spices and infused waters, which are prized for their flavor, their aromatic qualities, and, crucially, the colors they impart to the dish.

Spices like cardamom, cloves, bay leaves, and saffron and infused waters like rose water and pandan (kewra) water build a complex combination of aromas and flavors that are heightened by the warmth of the rice. One of the great pleasures of being served a biryani is the moment when the lid on the pot is lifted and all those wonderful aromas are let loose.

Turmeric and saffron are often added to biryanis to add color to the rice. The pigments curcumin in turmeric and crocetin in saffron stain the rice with bright yellow and orange hues. It's also common for cooks to splash a tablespoon of red beet juice over the rice prior to the final steam, just to turn some of the grains pinkish-red. The result is a rice dish in which the grains of rice alternate between ivory, yellow, orange, and red, a feast of color to accompany the feast of rice.

For the dried spices, I fry them with the browned onions, in order to release and extract their oil-soluble flavors and aromas so they season the qorma.

For saffron, it's best to bloom it separately in warm water or, as in this case, milk, the better to leach out its wonderful color and get the most out of its flavor. The saffron-infused milk is added along with the rosewater and pandan water only toward the end of cooking of the biryani, so their aromas won't get lost in the mix.

Once the onions and spices have cooked together, I add yogurt, water, and salt to create a well-seasoned and rich qorma base, and then add vegetables in to simmer until they're just tender but still hold their shape. Any vegetable that holds its structure when cooked and doesn’t easily fall apart or contribute too much water to the pot will work: Carrots, sweet corn, cauliflower, peas, green beans, and potatoes are all good choices. I've offered suggestions in the recipe below, but the choice of vegetables is up to you. The main things to keep in mind is that the type of vegetable, as well as how large or small they've been cut, will dictate the time it takes to cook them. If you want to use a hardier vegetable, like a winter squash, it helps to cook it separately before adding them to the qorma.

How to Assemble and Steam Biryani

While the qorma cooks, I parboil the rice, and once both are ready I begin building the biryani.

At that point, I put on a tight-fitting lid. This step is actually a technique called dum pukht, which literally means “breathe and cook” in Hindi. By sealing the pot tightly, the rice and vegetables absorb the aromas released from the spices and floral waters. To achieve a tight seal, I crimp a layer of aluminum foil around the pot, under the lid, but you can also use a tight layer of clean kitchen cloth or even seal the lid to the pot using a simple dough made from flour and water.

Biryanis are best served straight out of the hot pot. Unveiling a biryani at the dinner table can be quite dramatic, as the steam and aroma that immediately emanates from the pot and permeates the room.

Once you open up the pot, run a fork through the grains to fluff them up, the better for your guests to see the various colors and textures presented by the many-colored rice, the perfectly cooked vegetables, and the garnishes.

If you like, you can return with the pot to the kitchen and spoon out the rice onto a platter, garnished with wedges of fried potatoes and slices of hardboiled eggs, or even thin sheets of edible silver called varak. When serving on a platter, be careful not to overmix the grains, as they'll break; there is also the risk of losing the colorful layers of rice and vegetables.

While the biryani can be served with plain unsweetened yogurt, my carrot raita would also be a wonderful accompaniment. I prefer to leave the whole spices in the cooked biryani, but I know not everyone likes to bite into whole spices, so if you like you can fish them out before serving.

Biryani can be served hot or at room temperature. Stored in a sealed container, leftover biryani will keep for about a week in the refrigerator. 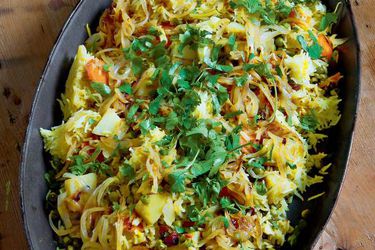 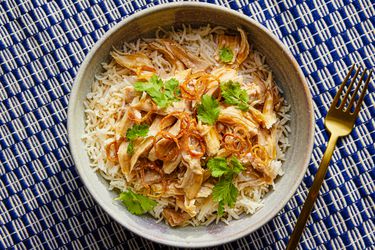