Before anyone comes out and yells at me that "potato salad is pure carbs!" "This is so unhealthy for a vegan!" and other wah wah wah type stuff, lemme just say: potato salad is freaking delicious, and that's all the justification I need, thank you very much.

The only problem is that my favorite potato salad relies on mayonnaise for richness and creaminess, an ingredient that unfortunately vegans can't consume.

Now I could've gone all-out and made my own vegan mayonnaise (the store-bought vegan mayonnaise I've tried has been universally terrible), but I didn't have my usual stock in the refrigerator, I'd just gotten back from the farmer's market with a load of adorable fingerling potatoes, and goddammit, I want my potato salad STAT.

There are a few basic golden rules to potato salads that I always start with:

With those basics out of the way, It was time do get creative.

I've made simple vinaigrette-dressed potato salads in the past—they tend to work pretty well for the firm, low-starch fingerling-style potatoes I was using. I actually like the cleaner, sharper flavors that really allow the potatoes to shine. But they're never quite as satisfying as a real creamy, mayo-based potato salad texture-wise.

What to do? Why not use the power of the potatoes themselves to creamify* my dressing?

*Yes, this is really a word. Or at least should be.

From my recent experiments with hearty vegan soups, I knew that the starch granules naturally present in a potato can be a powerful natural thickener, adding richness and creaminess to otherwise thin sauces.

I initially tried mashing a few of my cooked fingerling potatoes to see if I could get them to form a creamy coating, but it didn't work. Those small, young potatoes are so low in starch and firm-textured that they never really get smooth and creamy unless you go so far as to pass them through a tamis or fine-mesh strainer.

Much easier was to just add a single Yukon gold potato to the mix and fish out a few pieces after cooking all the potatoes, along with a bit of the starchy cooking liquid.

I added the chunks to the base for my dressing (a basic vinaigrette made with vinegar, whole grain mustard, shallots, and sweet pickle relish), then started smashing and whisking.

Once the potatoes were relatively smooth, I slowly whisked in some extra-virgin olive oil. I ended up with a semi-loose, yet still creamy vinaigrette that had the advantage of bright, fresh acidity and a texture that didn't dilute any of the wonderful, subtle flavors of the fingerling potatoes.

Just a few more seasonings and textural elements—sugar, pepper, celery, parsley, capers, and some sliced shallots—and my new go-to potato salad was born. And what a delicious baby it was. 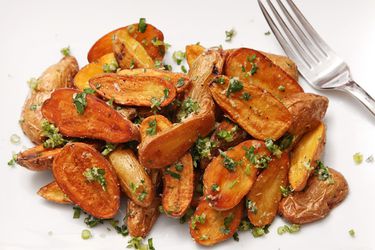 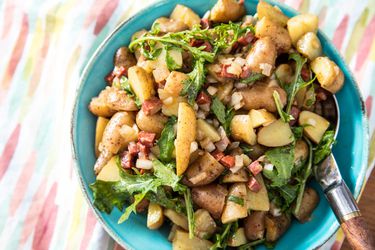