My wife Adri and I ate a lot of salads while on honeymoon in Vietnam a few years back. Not that we were on a diet or anything like that—wedding was over, time to let ourselves go, right?—but it's just that salads are sort of a way of life over there. More than just a simple side dish, they're often the star of the show, combining ingredients with a wildly diverse range of textures and flavors with light, punchy dressings.

My favorite was one we tasted at a small restaurant in Saigon. Made with cold rice noodles, poached shrimp, pomelo, peanuts, and tons of herbs, it was simultaneously light and refreshing while being completely satisfying as a meal in itself. Similar salads have made regular appearances on our dinner table ever since.

The challenge for me was how to make a salad like that—light and filling—while also adhering to a strictly vegan ingredient list. To be honest, it didn't end up being a particularly hard challenge: most of the ingredients are vegan to begin with. The only issue was coming up with a substitute for the meat and for the fish sauce that makes up part of the dressing.

For the meat, the easiest route would have been to just add some firm tofu to the mix, perhaps frying it for a little added fat and texture. But as I was browsing the tofu section of the Potrero Hill Whole Foods, something much more interesting caught my eye: yuba.

Yuba has got to be one of my favorite foods of all time, and not just because it's named after my late Boston Terrier (or was it the other way around? I can't remember). You know how, when you bring a pot of milk to a simmer on the stovetop, a skin of coagulated proteins forms on top? Yuba is the soy milk equivalent of that, and it's a byproduct of the tofu-making process.

You can find it both dried and fresh. The dried stuff needs to be rehydrated and ends up with a sort of spongy texture. Fresh yuba, on the other hand, is tender and a little stretchy with a clean, fresh flavor. If you've ever eaten the skin off a bowl of pudding you know what the texture is like.

Though yuba is great fresh with just a touch of ginger and soy sauce, I especially like the way it gets crisp and bubbly when you deep fry it—it becomes the ideal carrier of sauce and flavor, while adding a bit of fat and crispness of its own to the mix. Fried yuba is what takes this salad from a side dish to a main course.

The only real trick to frying yuba is that it has a tendency to stick to itself something fierce when you add it to the hot oil. After slicing it into strips, it's important to lower it into the oil gently, one piece at a time, so that they set up a bit before coming in contact with each other. I like to fry in a wok as it offers more room to move stuff around and less chance of a boil-over.

By making a few fried shallots in the same oil before adding the yuba, you not only get some delicious fried shallots to add to your salad, but you also add some flavor to that oil, which then makes its way into the yuba.

The remaining ingredients are pretty straightforward.

Carrots come first. I slice them into thin planks on a mandoline, then cut by hand into matchsticks (I find this much easier than to try and force the carrots through the julienne attachments on a mandoline).

Next I peel and halve some large cucumbers, using a spoon to remove the seeds before slicing the halves into crunchy slivers on a sharp bias.

Large handfuls of fresh mint and cilantro go in next, along with some grapefruit that I've cut into suprêmes. In Southeast Asia, you're far more likely to see a salad like this made with pomelo, grapefruit's larger, not-quite-as-juicy cousin. If you can find one, use it!

Finally, in go the noodles (which I've soaked in hot water until tender and rinsed under cold water to chill). I like to use the really thin rice vermicelli, though you can use any rice noodles you'd like. The key is to soak them long enough that they're tender but not so much that they're mushy.

I sprinkle some crushed roasted peanuts directly into the salad bowl (and save the rest to put on top).

The dressing is pretty simple and classic. Garlic and chilies pounded in a mortar and pestle (you get much better flavor extraction that way and a smoother texture), then in goes some brown or palm sugar, and lime juice.

While fish sauce would be a typical final ingredient, it's off the menu for this vegan version. Instead, I use a combination of soy sauce with a small dash of Maggi brand liquid aminos. It's a very common ingredient in Vietnamese cuisine (don't ask me how it got there), and has many of the same savory umami qualities of fish sauce.

You're gonna want to eat this stuff by the spoonful, but it only gets better once the peanuts get involved.

Throw it all together, add some fried shallots, top with peanuts, let that yuba absorb some of that sauce, and you've got a dish that looks like a salad but eats like a meal. 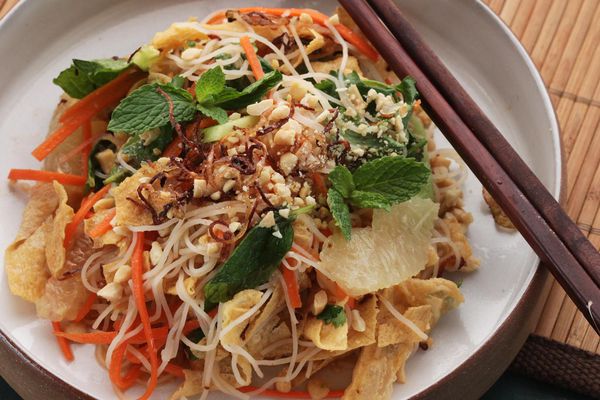