Ravioli filled with a ring of creamy ricotta surrounding a perfectly runny yolk.

Let me begin by saying, you can do this. I know it for a fact because the first time I made uovo in raviolo was also the first time I made fresh pasta. And it was years before I went to culinary school or started working at Serious Eats. At the time, I was your totally average enthusiastic-but-wholly-inexperienced home cook.

Then again, I'll be frank. It didn't go super well. For starters, it was New Year's Eve, and I was cooking for six—no pressure or anything. And because I'd never made fresh pasta before, everything (especially my very nice dress) was covered in flour. I didn't know to divide my pasta dough into manageable sections, so I wound up with a single, obscenely long piece that I didn't even think to cut in half, let alone eighths. When my company arrived, they had to navigate the 20-foot sheet of dough-topped parchment paper that was stretched across my living room floor. What can I say? I sure knew how to whet an appetite.

Anyway, it took me several hours, a bottle's worth of calm-down-wine, and a half dozen broken eggs, but by midnight(ish) we were sitting down to two gorgeous oversized ravioli apiece, each filled with a ring of creamy ricotta cheese surrounding an intact, perfectly runny egg yolk.

Since that day, I've made uovo in raviolo* dozens of times. And I'm confident in saying that it's actually easier than making regular ravioli, mainly because you don't have to make nearly as many per serving. And they're freaking beautiful. This is the kind of dish that people talk about for years. Little do they know, it's actually pretty effortless.

*Let's talk about the name of this pasta for a second. Look online, and you'll find all sorts of variations: uova al raviolo, uova di raviolo, raviolone ai tuorli di uova, raviolo con rosso di uova fondante, and on and on. Those all work, but the dish originated at the famed San Domenico restaurant in Imola, Italy, and there they've always called it uovo in raviolo, so that's what we're calling it too.

If the whole prospect intimidates you, consider this: How often does an egg yolk break in its shell? Pretty much never, right? Well, all you're really doing here is replacing the egg white with a delicious, pillowy filling, and the shell with fresh pasta. Is fresh pasta as hard as a shell? No, but it's also relatively firm until cooked and not nearly as brittle. In my book, the odds of breakage even out pretty well.

My recipe calls for a basic ricotta filling, which really lets the flavor and texture of the yolk shine. (That said, my butternut squash ravioli filling or my mushroom tortellini filling would also work nicely here.)

I serve the egg yolk ravioli in a butter sauce laced with salty pancetta, with a finishing squeeze of lemon juice and a sprinkle of fresh parsley for a balancing pop of freshness (I omitted the fresh white truffles used in the original version because...money). So yeah, it's incredibly decadent, which is why I recommend only making two or three per person. It won't necessarily fill you up, but it also won't leave you feeling weighed down; I'd suggest supplementing the meal with a fresh salad in a bright, acidic dressing.

Now, if you're entirely new to working with pasta, you may want to pause here and pay a quick visit to our complete guide to making fresh pasta. Otherwise, just know that the only ingredient you'll need to make your own egg yolk ravioli is the filling, along with all-purpose flour, eggs, and salt. It's also handy to have the right tools (like a cookie cutter or can to cut the dough, and a pastry bag to squeeze out your filling).

First things first, you'll want to mix your dough and wrap it up tightly in plastic to rest (I use a half-recipe here). Meanwhile, you can prepare your filling.

Once ready, it's time to start rolling that dough. To keep it from drying out, work with just half of your dough at a time, keeping the rest wrapped tightly in plastic. Roll it out to just thinner than 1/16 of an inch—usually the second-to-last setting on your pasta machine. You may be tempted to roll it even thinner. Don't—you'll wind up with a less balanced ratio of filling to dough and, after boiling, a far less aesthetically appealing plate.

Ideally, the dough should be almost the full width of the pasta roller, between four and five inches across. When you've got the correct thickness, lay the dough out on a large, flat surface lightly dusted with flour (semolina flour is ideal, since it won't make your dough gummy if it gets moistened, but all-purpose is perfectly fine) and cut it in half. Each half portion of dough will make five ravioli.

On a large, lightly floured surface, use your cookie cutter (or can) to punch out as many circles as you can from your first piece of dough—you should be able to get 10, but don't worry if it's fewer. You can ball up any scraps and wrap them up to roll later.

Cover half of the circles with a towel to prevent them from drying out. Then, take your pastry bag and gently squeeze out a ring of filling approximately one and a half inches in diameter—you're basically making a cushioned support for your yolk, so rather than whipping out your measuring tape, just aim to make a yolk-sized hole in the center.

Then add a second ring of filling directly on top of the first one. You should be using a total of roughly one tablespoon of filling for each raviolo; the second ring should make the circle slightly taller than yolk height—about three-quarters of an inch. If you're able to move in a continuous loop and make a stunningly even tower of ricotta, great, you're a champion! But honestly, the one shown here was my only really pretty one; nobody's going to be able to tell once they're cooked.

Continue adding your filling to the remaining four dough circles. Then, separate your first egg yolk by cracking it into your hand and allowing the white to drip between your fingers into a container. When only the intact yolk remains, gently slide it into the center of your filling.

Once your first five dough circles have their ricotta filling and yolks, you can uncover the other half of your circles—these will form the tops of your ravioli, so pair each empty circle with a filled one. Working one pair at a time, use your pastry brush to add a very light layer of water to the top round of dough. Then, lift it up and gently place it directly over the filled circle, wet side down. Slowly work your way around the circle, pressing and stretching the dough to make the edges meet. You want to press gently on the filling to remove any air bubbles, but do not press down on the center of the raviolo, or you'll break your yolk.

Once you've made all five, you can move them to a lightly floured sheet of parchment paper and cover them with a kitchen towel to keep them from drying out. Then simply repeat the process with your remaining piece of dough. In all, you should be able to make about 10 ravioli. I like to serve two or three per person as a main course (though of course you could do a single one per person as an elegant appetizer for a party).

I usually start my sauce while I'm waiting for the water to come to a boil since it's a quick and easy recipe. I chop some pancetta and throw it in a pan over low heat to allow the fat to render and the pork to crisp up a bit. Meanwhile, I mince half a shallot. When the pancetta's cooked and there are browned bits sticking to the pan, I remove it with a slotted spoon and toss the shallots into the rendered fat. As soon as they start to smell fragrant, I pour in white wine to deglaze the pan and scrape up any browned bits with a spatula. Once the wine has reduced to a syrupy consistency, I take the pan off the heat and toss my pancetta back in. At this point, the pasta water is usually at a boil. Note that if you're making a full 10 ravioli, you'll want to make the sauce in two pans—fitting 10 into a single sauté pan is almost impossible, and a surefire way to burst a yolk.

To cook the ravioli, gently slide them into the water and lower the heat for a slow simmer. You don't want to agitate these guys too much. You want them to simmer for about a minute and a half, so as soon as they're in, I start melting butter in my skillet over low heat. When my timer goes off, I transfer the ravioli and some starchy pasta water to the pan, along with a squeeze of lemon juice, and gently swirl the pan until the butter and water have emulsified—about 30 more seconds. For the prettiest presentation, plate them and then garnish with a sprinkle of minced parsley.

And there you have it. The most extravagant fresh pasta recipe, with minimal effort. But don't listen to me; let that runny yolk do the talking.

For the Pan Sauce:

Look for a high-quality ricotta that contains no gums or stabilizers, such as Calabro. If stabilizer-free ricotta is not available, you can make your own using this technique.

Because these ravioli are large, it is necessary to finish the dish using two skillets, dividing the pan sauce ingredients and ravioli between them. 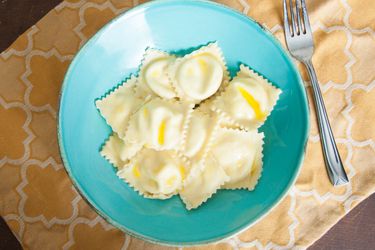