I like mine to be rich, perfectly smooth, and creamy with plenty of butter and heavy cream, loaded with black pepper, maybe some chives if I want to feel extra fancy. Somewhere between a dish on its own and a sauce, it should have the consistency of a pudding, slowly working it's way across a tilted plate. I like to pick up a piece of turkey and swirl it in my gravy-covered potatoes so that they coat it, their buttery richness working into the cracks in the meat. Sounds good, right? Who could possibly want it any other way?

My sister. That's who.

For Pico (yes, that's her real name*), mashed potatoes are fluffy and thick enough to stand up under their own weight, Close Encounters Of The Third Kind-style. These are the kind of mashed potatoes that can hold their own on the plate. The kind that you want to turn into a TV commercial with a pat of butter slowly melting on top. I'm not talking about the uber-lumpy skin-on kind that more whimsical chefs might refer to as "smashed potatoes" or even "smashers" on cute and clever family-restaurant menus. I'm talking smooth, but light and fluffy.

So how do you arrive at such two different results with the same starting ingredients? It's all got to do with starch.

For our purposes, potatoes can be thought of as basically three different things. First, there are the cells, which are held together with pectin, a sort of natural plant glue, and the walls of the cells are where starch is concentrated.

Now starch molecules—a type of carbohydrate—come bundled up in tight granules. As potatoes cook, pectin breaks down, and individual cells expand and separate, releasing starch granules into the outside environment. These starch granules absorb water like little balloons, eventually popping and releasing sticky starch molecules. The concentration of this released starch that makes its way into the final mashed potatoes to a large degree determines their consistency.

To put it simply: for lighter, fluffier potatoes, the goal is to incorporate as little starch as possible in the final product.

So how does one go about recognizing starch molecules from quite a long ways away? There are a number of factors that determine this.

So just knowing these factors now, we should be able to determine the best way to get both styles of potatoes.

Ultra-creamy mashed potatoes are really more of a French thing than an American one, and if you want to be fancy, you can call them pommes purées. The goal with them is to get them ultra rich, yet not heavy or leaden. This requires some careful cooking to allow just enough starch to be released to give it the right texture, but not so much that it's gluey. The best way I've found to do this is to boil medium-waxy potatoes (like a Yukon Gold) just until tender enough to be poked through with a cake tester or paring knife with no resistance. Starting them in cold water helps them cook more evenly, as well as helping to strengthen some of their pectin, which keeps them from falling apart.

I tried several methods to puree the potatoes, including pressing through a tamis (lots of work), throwing them straight in a stand mixer (they never get smooth), and using the food processor (really, really bad idea). The best and easiest method was to just pass them through a ricer directly into the bowl of a stand mixer. You don't even need to peel them.

After that, I whisk them on high speed with the paddle attachment, adding melted butter, heavy cream, salt, and pepper. If I'm not serving vegetarians, I also like to add a bit of chicken stock, which gives it an intensely savory quality (don't give away the secret).

Getting potatoes light and fluffy is a little bit trickier. One thing is clear: you want to start with mealy russets that fall apart with minimal prodding and release starch in an easy-to-rinse-off manner. At first I thought that simply rinsing away as much starch as possible before cooking would be the key.

To do this, I made three batches of potatoes. The first I cut into large chunks, the second into 1-inch dice, and the last I grated on the large holes of a box grater. All three batches I rinsed under cold water until the liquid ran clear. By collecting the drained milky liquid from each batch of potatoes and comparing it, it was quite clear that the grated potatoes released far more starches than either of the other types of potatoes.

Turns out that another weird phenomena occurs when you try and cook grated and rinsed potatoes: they simply don't soften. I boiled those grated potatoes for a full 45 minutes to no avail. Even after forcing them through a ricer, pebbly, hard bits remained. What the heck was going on?

Of the other two batches—the large chunks and the small dice—both formed a moderately fluffy mash, but to get the potatoes even fluffier, I found that rinsing the potatoes of excess starch both before and after cooking was the key. A quick pass through the ricer and a little bit of lubrication provided by some butter and whole milk gently stirred in with a rubber spatula, and my sister's potatoes were ready for sculpting.

With both potato cooking methods in order, my sister and I can finally get back to fighting over really important things like who gets to play the guitar part on Beatles Rock Band.

So which type are you? Are you a creamy purée type or a light and fluffy potato-eater? 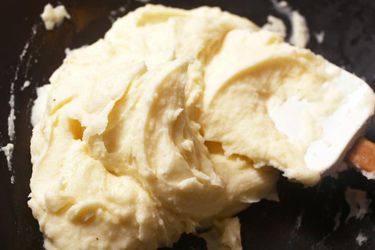 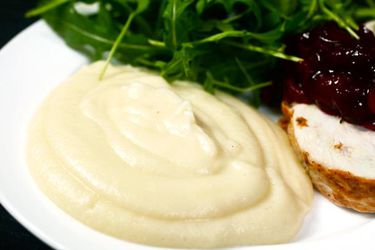 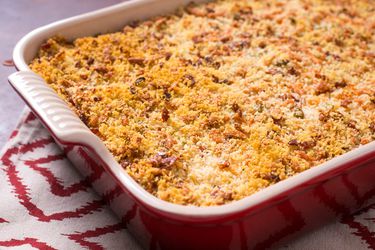 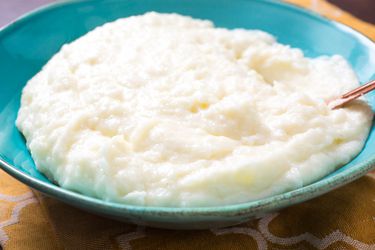 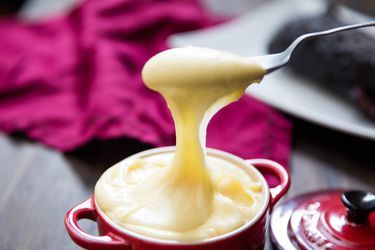 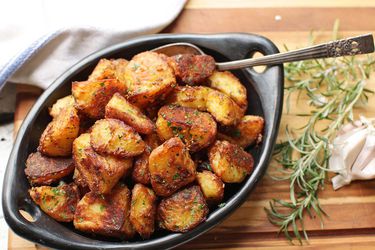