Pull-apart tender meat and ultra-crisp skin: slow-roasted pork may not be the most gorgeous looking, but the flavor more than makes up for it.

J. Kenji López-Alt
Culinary Consultant
Kenji is the former culinary director for Serious Eats and a current culinary consultant for the site. He is also a New York Times food columnist and the author of The Food Lab: Better Home Cooking Through Science.
Learn about Serious Eats' Editorial Process
(44)
0
In This Recipe

Remember in the first season of Thundercats when Lion-o had to prove himself as the true Lord of New Thundera by battling each of the other cats in their own game? After he proves himself stronger than Panthro, beats Cheetara in a race, outwiles the ThunderKittens WilyKit and WilyKat in the Maze of Infinity, and overcomes Tygra's mental projections to face his greatest fear, you think that the whole thing is over and you can finally rest easy.

But no, Lion-o's anointment comes back with a vengeance as he is forced to face none other than Mumm-ra himself on the fifth day.

Well, we've tackled whole roasted suckling pig, not just one, but two versions of all-belly porchetta (one cooked sous-vide and deep fried), and a crown roast of pork. Surely our adventures in Swineville are over, you thought.

Nope. Here, we're going to talk about what is perhaps the greatest of all bits of culinary alchemy. The transformation of one of the cheapest cuts of meat in the butcher's display case into one of the most glorious festive centerpieces imaginable.

We're talking pork butt, in all of it's juicy, porky, spoon-tender in the middle, impossibly crisp and crusty-on-the-outside glory.

What Is Pork Butt?

First off, a quick word on nomenclature. Pork butt is not pork butt. Let me explain.

See, at some point in our colonial past, Boston was well known for its pork production and would often ship preserved pork (most often front shoulders—the least desirable part of the hog—but often hams and heads as well) in large wooden barrels. These barrels were of the size officially known as "butt" or "pipe." That'd be a 126 gallon barrel half the size of a 252 gallon tun, larger than a 84 gallon firkin, and twice the size of a 63 gallon hogshead (which, incidentally, have nothing to do with actual hogs or heads).

The pork-filled barrels shipped out across the country came to be known as Boston Butts, a term which was soon applied to the meat inside, despite the fact that it actually came from the shoulder of the hog. These days, conventions in many parts of the country still refer to the pork shoulder as Boston butt, though in many cities (including Boston itself), they're known as just plain "butt."

Had our forebears deigned to ship pork in 84 gallon barrels, we might have found ourselves spooning slow-cooked pulled Boston firkin into our BBQ sandwiches, perhaps making our Italian sausages out of Boston puncheon, or if those shoulders were shipped to New Mexico via 18 gallon barrels, they'd be chowing down on chile verde made out of Boston rundlet.

With that out of the way, let's talk about what is actually inside a Boston butt... er, shoulder.

A full bone-in Boston butt is a formidable piece of meat, usually weighing in at around eight to twelve pounds, riddled with a significant amount of connective tissue and inter/intramuscular fat, all swathed in a thick, tough skin.

Our goal is to make this tough piece of meat spoonably tender. How do you do that? Well, you cook it.

So to sum up: With fast twitch muscle, temperature is the most important factor when cooking. With slow twitch, both time and temperature affect the final product.

So if higher temperatures leads to faster breakdown of connective tissue, shouldn't you just blast your pork shoulder at the highest oven temperature it can take without burning the skin?

Not so fast. Temperature has other effects too, namely, drying meat out. I roasted two identical pork shoulders until they were both equally tender. One at 375°F (which took about 3 hours), and second at 250°F (which took about 8 hours). After roasting I calculated the amount of total moisture lost in the meat by adding together the weight of the finished roast plus the fatty drippings in the pan below and subtracting that from the initial weight of the roast.

Turns out that at a higher temperature, a pork shoulder loses about 8% more juices than at a lower temperature due to muscle fibers contracting and squeezing out their contents. Eating the meat from the two roasts confirmed as much, though to be honest, both were pretty crazy juicy and moist.

On the other hand, the high temperature roast showed at least one definite advantage over the low-roast: The skin.

Here is a piece of skin from a pork shoulder cooked at 375°F the whole time:

First, you've got to break down connective tissue. There's a common misconception that animal skin—chicken skin, turkey skin, pork rinds—is made up of fat. This is not true. There certainly is a lot of fat in the skin and directly underneath it (necessary to help warm blooded animals maintain their body temperature), but skin also contains a great deal of water and connective proteins which, just like connective tissues in slow-twitch muscles, must be broken down via long cooking.

On top of that, once the connective tissue has softened sufficiently, moisture needs to be forced out of it, and the remaining proteins need to be heated until they coagulate and stiffen up. It's the combination of these three things—connective tissue breakdown, moisture loss, and firming of proteins—that leads to crisp-but-not-tough skin.

When cooked at 375°F, all three of these things happen at about the same time. By the time the connective tissue has broken down, you've driven off enough moisture from the rind to render it hard and crunchy. In a 250°F oven, on the other hand, connective tissue breaks down for sure, but moisture loss and protein stiffening don't occur to a great enough degree to deliver a crisp finished product. Instead, you end up with skin that's soft and tender, but floppy.

So clearly, once again we should be cooking our pork at a higher temperature, right?

Hold up, there's one more thing to consider.

Getting the Crispiest Skin

We all know what surface area is, right? Take a look once again at a close up of the crisp skin from the pork cooked at 375°F:

It's the same principle behind, say, scratching up the surface of potatoes before roasting them to get them extra crisp (more on ultra crispy roast potatoes here), or packing your burger extra loose to give it a crisper exterior and more browning (check out that effect in my recipe for Ultra Crispy Burgers.

On the other hand, after 8 hours in a 250°F oven, the pig skin has very little structural integrity—there's really very little holding it together and it closely resembles a bundle of tiny balloons just waiting to be filled.

How do you fill those balloons? Let heat do the work for you.

By taking that slow-cooked pork, and banging it into a preheated 500°F oven, both air and steam trapped within the skin will rapidly expand, causing millions of tiny bubbles to form and causing the skin to rapidly expand. And here's the key: As the bubbles expand, they stretch their walls out thinner and thinner. Eventually, they are so thin that the heat from the oven is able to quite rapidly cause them to set into a permanent shape that won't collapse even when the pork is pulled out of the oven.

In this sense, pig skin is very much like a loaf of bread: high temperature causes gas expansion which then gets trapped in a protein matrix that firms up in the heat of the oven to create a crunchy, crisp crust.

Have you ever seen anything so beautiful?

Personally, I generally prefer my meat relatively unadorned—good meat, salt, and pepper is all I need. Pork shoulder, on the other hand, is great at taking flavor. You can feel free to rub the meat and skin with your favorite spice blend or dry rub before roasting it, or—my method of choice since it keeps your options open—keep it plain for roasting and instead season the shredded picked tender meat before serving.

I like to bring the thing whole to the table and allow diners to pick and pull at it with their fingers, offering a few sauces to work with on the side. Try sweet and spicy nuoc cham, Chinese style char sui, Cuban mojo, a sweet Memphis-style barbecue sauce, or a bright Argentinian chimichurri. Or better yet, this is a pork party, so throw out a whole selection.

Shredded roasted pork shoulder is excellent on its own, even better in sandwiches with a bit of cole slaw, or makes an excellent addition to soups, stews, taco fillings, Cuban sandwiches, empanada fillings, arepa stuffings, hash, omelettes, etc.

It's nearly as impossible to mess up slow-cooked pork shoulder as it is to bring the sucker to the table without eating half the skin yourself before it arrives.

To make a pan sauce, skip the aluminum foil when roasting; when the pork's finished, drain off and discard the excess fat and deglaze the rimmed baking sheet by heating it over a single burner and adding two cups of white wine, chicken stock, or a combination of both. Scrape up browned bits, transfer to a small saucepan, season to taste, and whisk in two tablespoons butter off heat. 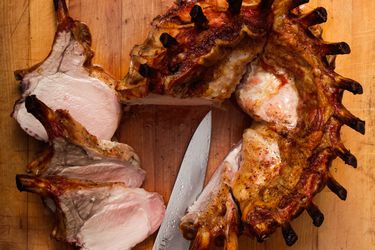 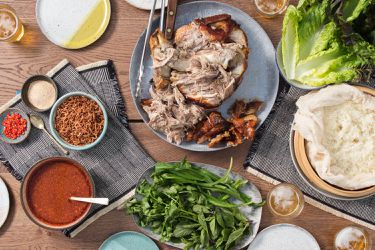