Every vegan has one of "those" friends, right? You know the one I'm talking about. The one who asks, "is this vegan?" every time you offer them food, knowing full well that it is, only so they can inform you that they don't eat vegan food. The one who will not miss an opportunity to point out his non-vegan-ness and the inherent superiority of an omnivorous diet.

I've got a friend who acts like that on occasion. He's not the most closed-minded in the world when it comes to things like this, but he will make sure to eat before he arrives at a vegan dinner party and will politely decline to even taste what I've made. Don't worry, he's got at least a few redeeming characteristics.

A few years back, I treated my very meat-centric dad to a meal at Craigie on Main in Cambridge, MA. The thing I didn't tell him beforehand? That the 12-course tasting menu would be 100% vegan. It took him until the fifth course to actually catch on, and he finished all 12 courses with gusto. Spurred on by that success, I decided to give myself a vegan cooking challenge this year: serve Mr. Omnisuperior a vegan dish so damn good and convincing that even he, an avowed anti-vegan, would devour it.

To be clear: My goal here was not to convince him that all vegan food is gonna be up his alley. There are some built-in preferences that are simply too strong to defeat and I knew I was never going to make a vegetable-lover out of him. Instead I decided to focus my goal on the other type of vegan recipe: the kind that does its best to emulate meat- or dairy-based foods.

A fully loaded vegan queso dip seemed like a good place to start.

Traditional queso dip is a Texas specialty made by combining a gooey cheese sauce (okay, let's just say it: Velveeta) with a can of Ro*Tel tomatoes and green chilies. Fully loaded, it'll come with a kitchen sink assortment of varying accoutrements, but I like it with fried crumbled chorizo, avocado, cilantro, onions, scallions, and black beans.

Luckily, for this particular recipe, I've already completed almost all of the work in advance. My vegan nachos.

Early this week I showed you my technique for vegan chorizo, which uses dehydrated lentils and shredded tofu for texture along with real whole dried chilies and roasted poblano peppers for flavoring.

All I had to do here was fry that chorizo in a skillet until browned and crisp, combine my cheese sauce with a can of Ro*Tel tomatoes (you can use diced tomatoes and a can of chopped chilies if you can't find Ro*Tel), stir in all those other extras and I was good to go.

My recipe was now complete. All that remained was to spring the trap. The next night, my wife Adri and I went over to our friend's place to play a game of Scrabble. Mr. Omnisuperior was the fourth guest. As we sat down to play, I pulled out a container of my queso dip and a bag of chips, asking my friends if they wanted some. "I had to make it for a photo shoot for my book," I told them. "I actually can't eat any because it's not vegan, but you guys should have it."

"Queso dip? Is that like the cheese sauce with meat and stuff in it?"

They both thanked me and dug in while Adri and I stuck with our beers. The bowl was three quarters empty before I casually reached for a chip, dipped it in, and ate it. Adri, playing along, said to me, "Kenji, you can't eat that."

I'd love to be able to say that my friends' faces were locked in a pose of slack-jawed amazement, as a string of glistening vegan cheese sauce slowly stretched and sagged down between their open mouths and their chips, frozen in mid-air, but that's not what happened. Instead I got a "huh, that's good. I actually thought this was real cheese." The bowl was quickly scraped clean, which is all the confirmation I needed.

It's a shame that I had to resort to outright trickery to convince my friend that plant-based food can be every bit as delicious and satisfying as animal-based foods, but difficult cases call for difficult measures. I considered it a solid, if polite, victory.

Does scoring a Scrabble on a double word score as my first turn of the game count as impolitely rubbing it in? I like to think it does. 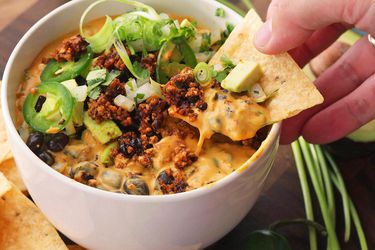