The array of turkeys you'll find at your average large supermarket can be baffling. The good news? You can ignore almost all of it should you choose to. Sure, you'll see labels like "organic" or "heritage breed" or "free-range," and those labels do have meaning, to an extent*. But as far as choosing which one to cook, there are three broad categories that they can all be divided into, that should help you decide which one is right for your table.

*Stay tuned for our complete guide to turkeys next week.

Most folks at home have two factors to balance in their cooking equation: Amount of effort and end results. For some, they're willing to put in a ton of work to get marginally better results at the end. For others, they'd rather take the easiest route and settle for just-good-enough. Where you lie on this spectrum should help you decide whether you want to select a natural, kosher, or self-basting turkey.

Here's the quick and dirty guide to making your selection.

What The Label Means: Little or no processing has been done to the turkey post-harvest. That is, once slaughtered, the bird was gutted, de-feathered, chilled, packaged, and that's about it. Most heritage-breed birds (birds bred from old stocks), as well as organic birds will also be sold as natural, though the terms are not interchangeable.

Tasting Notes: Of the three major categories of turkey treatment, natural birds are the ones that'll have the strongest "turkey" flavor, but it's important to note that it's also the most diverse category of the bunch. Birds labeled "natural" will come from anywhere from run-of-the-mill, massive-scale coops to small farms. You'll find turkeys of every breed and size. All of these factors can affect its final flavor, and it's impossible to conduct a comprehensive taste test to cover all of your bases.

As a general rule of thumb, however, there's a tradeoff between flavor and tenderness. Turkeys from heritage breeds raised on small farms with plenty of room to exercise and move about will tend to have darker, more strongly flavored meat.

If the large turkey manufacturers had their way, turkeys would be basketball-shaped boneless balls of all white meat with a head and two legs stuck on 'em. They're working towards that end goal faster than you think. Turkeys from larger productions are bred from breeds that are selected for their plump breasts and are kept in surroundings that discourage too much movement, keeping their meat tender. Flavor is a mere afterthought.

Advantages: A natural turkey has been minimally processed, which means that the level of salt, brining, and other flavoring is entirely up to you. This is the type of turkey to pick if real turkey flavor is your end goal. A carefully cooked natural turkey can be just as moist as a brined or injected bird—particularly if you cook the breasts to a more reasonable 145° to 150°F instead of the frankly insane standard 165°F recommendation.*

*When done carefully and rested properly, it's also completely safe.

Disadvantages: With no buffer against overcooking, it's easy for a natural bird to end up dry and tough. For this reason, brining or salting the bird overnight prior to cooking is recommended. There are differing degrees of standards in terms of humane treatment for turkeys as well. If this is of concern to you, make sure you know the specific standards of the farm you are purchasing your turkey from.

What The Label Means: Kosher turkeys have two distinct differences from natural turkeys. Only one of them affects their flavor. First, they've been ritually slaughtered by a shechita and killed according to kosher law. Secondly, they're heavily salted after slaughter, ostensibly to draw out excess blood. In reality, this salting step acts much in the same way as brining.

Brining works by altering the structure of proteins in meat, allowing it to retain more moisture as it cooks (for more on brining, see The Food Lab: Turkey Brining Basics. When you brine a bird, not only does your meat retain more moisture, it also absorbs some of the briny liquid, simultaneously seasoning the meat, as well as slightly diluting its flavor.

Salted or koshered birds, on the other hand, don't see any of this flavor dilution, as all the juices in the birds are those that are naturally present to begin with. Kosher turkeys often win in blind taste tests, but this is not necessarily because they are better tasting, but simply because they are more salty than a standard bird—that is, it's very difficult to compensate for that extra saltiness, thus most side-by-side taste tests are not particularly useful.

Advantages: Kosher birds retain more moisture as they cook, creating an automatic buffer against overcooking. In my taste tests, a properly cooked natural turkey ends up as juicy and moist as a kosher turkey, but even a few degrees past 150°F and a kosher bird will show some clear advantages. Kosher birds do not need to be seasoned with salt or brined before roasting.

Disadvantages: Salt-sensitive folks might have trouble, as kosher birds are by definition saltier than their natural counterparts. The salting step can also impart a flavor to the roasted bird—often described as "toasty" or "chemical-y"—that some eaters may find off-putting. Finally, kosher labeling indicates a particularly controversial method of slaughter. Many animal rights activists feel that the requirement that the animal be conscious when their throat is cut to be cruel and inhumane. (Most non-kosher slaughterhouses stun birds with an electrical charge before slaughter).

What The Label Means: Self-basting or injected birds have been treated with a brine and/or a flavored injection to increase moisture retention and flavor. A naturally brined bird—like you'd do at home—is only affected in its outer layers. Luckily, these are also the layers most prone to overcooking and drying out. An injected bird, on the other hand, has brine deposited throughout its meat. It'll retain drastically more moisture than a non-brined bird. Aside from salt and water, other flavor enhancers as well as some fat may be added to self-basting birds. "Enhanced" poultry is synonymous with self-basting.

Advantages: Most big brands of turkey, such as Butterball and Jenny-O sell self-basting turkeys (Jenny-O also sells natural birds), making them widely available, and extraordinarily inexpensive. Because of their deep-injected brine, they're brimming with juice—cook up a Butterball turkey to 150°F, and liquid will practically pour out of it like a sponge as you carve it.

They're also very easy to cook, with a built-in buffer against dry, stringy meat. If juiciness, tenderness, ease of preparation, and foolproofness are what you value above all, then a self-basting turkey is for you.

Disadvantages: Because birds that are self-basting are generally bred for high yield and tenderness, they tend to be relatively bland. Some tasters have complained that the sponge-like analogy is a little too apt—after that initial gush of juice, they can take on a wrung-out texture. The meat can sometimes be so tender that it tastes mushy rather than meaty. You are also unlikely to find a self-basting turkey that has been raised by any but the most lenient of humanity standards. 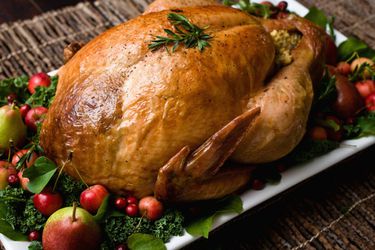