Come August, when our local tomatoes become available, we could happily eat nothing else. Our go-to lunch becomes little more than a piece of crusty peasant bread topped with thick slices of ripe heirloom tomatoes, torn mozzarella, a drizzle of good olive oil, perhaps a few snipped chives or basil leaves, and a sprinkle of flaky sea salt.

But, as with a perfect caprese salad, it's key to use tomatoes that are at their peak. Most supermarket varieties—those big, beefsteaky tomatoes you'll spot on produce shelves all year round—are picked when they're still green and firm, in order to better weather cross-country shipping. The result tends to be wan, mealy specimens that lack the essential tomato-ness of their local in-season counterparts. So we set out to create an elegant, summery twist on the classic tomato-and-mozz that captures those same satisfying flavors, no matter when, or where, you buy your tomatoes. We're talking blistered tomatoes and creamy burrata on crisp crostini, all delicately drizzled with zesty chive oil.

Step one: skip the large tomatoes altogether and go for the cherry variety, instead. As Kenji has explained, they're consistently sweeter, juicier, and more flavorful than their beefsteak cousins. This is partly due to how cherry tomatoes have been bred, but their smaller size also prevents them from crushing one another in transit, allowing farmers to pick them much closer to ripeness. We love using mixed-color tomatoes to make our crostini pop, but you should ultimately pick whatever looks best at your market.

We start by searing the tomatoes in a hot skillet, letting them sit and brown for a moment before tossing them. In just three or four minutes, the tomatoes become blistered, jammy, and ready to burst. Then we turn off the flame and add some slices of fresh garlic, stirring to let them gently cook in the residual heat. Finally, we season everything with salt and pepper, transfer it to a bowl, and add a generous splash of quality extra-virgin olive oil. The tomatoes can be used warm or at room temperature, so if you decide to make them in advance, let them sit out for a bit before you assemble the toasts.

Next comes the cheese. Sure, burrata is more than a little indulgent, but that's really the point. Good-quality burrata is so soft and creamy that you should be able to just tear it with your hands and drape it over the warm tomatoes. We taste-tested a local store-made version, as well as Bel Gioioso brand; the latter was hands-down the winner, and only a little more expensive. (The store version had too much of a firm mozzarella shell for our liking, making it trickier to tear, and didn't have the homogeneous blend of cream and curds you want in the center.)

We pile our toppings onto crisp crostini. "Crostini" might just mean "little toasts," but you can pull that definition in a number of different directions once you think of the toast as the delivery mechanism for a vast range of toppings. Using a mild, young cheese like ricotta, cottage cheese, or burrata is a classic way to create creamy counterpoint to something more assertive like grilled mushrooms, olives, or, in this case, charred cherry tomatoes. But regardless of what you put on it, the method for the bread is the same: first, slice a baguette into half-inch slices (we like to do this on a sharp angle, both to make the toasts easier to bite, and because they look nicer). Then brush a little olive oil on both sides of the bread and lightly toast (or grill) it until light brown. We often rub a raw garlic clove on one side of each toast while it's still warm, but we skipped this step here since we'd already added garlic to the charred tomatoes.

Our finishing touch is a light drizzle of chive oil—a blend of chopped chives and neutral vegetable oil (olive oil would have overpowered the herb too much), whizzed in a blender and drained to separate out the solids. If you have a little left over, it's an excellent addition to grilled fish, most chicken preparations, or light pasta dishes. We also found some pretty micro greens to lay on top of our crostini, just to up the fancy factor, but they're not remotely required. This is what we love about summer: Take just a few great ingredients, treat them simply but with care, and make something that's really worth toasting to. 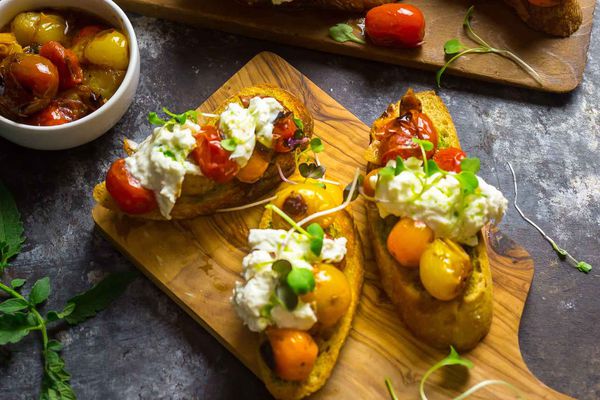 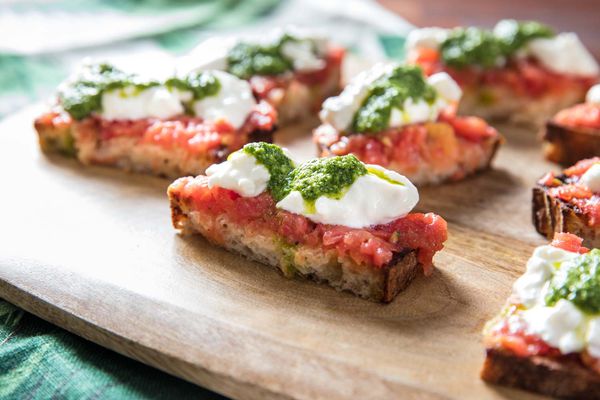