The Nine Emperor Gods Festival, generally referred to in Thailand as the "Je (vegetarian) Festival" is currently underway. The festival lasts a little over a week and is mostly participated by Thais of Chinese descent (especially ones of Taoist persuasion). If you visit Bangkok's Chinatown right now, you'll see little yellow flags everywhere; they're used by restaurants and street vendors to announce their participation in the festival.

It must be clearly stated, however, that historically Thai has never been a vegetarian culture. We're the people that have settled down in the river plains where we can grow rice and catch fish. Our literature and expressions are dotted with references to rice and fish. In other words, the tofu green curry you see at a Thai restaurants in the U.S. or Europe is neither how we usually prepare the curry nor something we eat regularly; it's more the restaurant's way of accommodating its vegetarian diners. Tofu isn't normally used as meat replacement in Thai cooking, except at vegetarian restaurants.

Here's a dish to celebrate the festival. It is vegan, and there's no ersatz meat. Not that there's anything wrong with it, but you know ...

We're taking Tom Kha Gai, the famous Thai coconut chicken soup, and changing it up. We're removing the "gai" (chicken) from both the name and the dish, doubling the amount of mushrooms, adding to it the bouncy udon noodles which is very Thai (just kidding), and replacing the source of salinity from the traditional fish sauce to salt (I personally don't think Tom Kha seasoned with soy sauce is palatable, but YMMV). We're also switching from chicken broth to vegetable broth.

The rest remains the same. The heart and soul of the broth, namely the coconut milk and the infusing herbs (galangal, lemongrass, and kaffir lime leaves), stay.

Those of you who can't find all or some of these herbs, don't worry. Use Tom Kha paste that comes in a jar. I mean it. In the face of scarcity, it's best to go with the solution that makes the most sense. And I think that solution is to use commercial Tom Kha paste. But if you can only find one out of three fresh herbs, may it be galangal. It's the most important one of the three (historical documents show that years and years ago, we didn't even use the other two in this recipe). After all, galangal is the "kha" in Tom Kha.

Don't let the floating herbs distress you. That's the way Tom Kha is served in Thailand, i.e. with all the infusing herbs still floating about in the bowl even though they are not to be eaten. If that bothers you, fish them out before you serve the soup. It won't affect the taste. By the time the soup is served, the herbs' job will have been completed anyway. 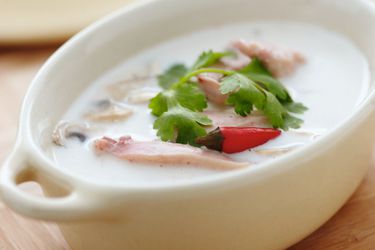 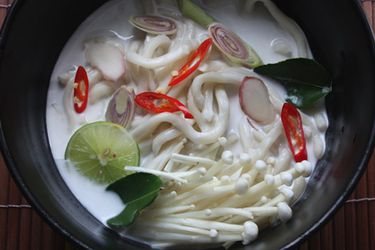