How to Make Vegan Cantonese-Style Lettuce Cups With Tofu, Pine Nut, and Jicama

There are some life experiences that I put myself through just so that I have a frame of reference for the general cultural zeitgeist. I don't always enjoy the experiences, but I'm pretty much always happy I went through with them so that I could express an informed opinion one way or the other. It took me a while to start reading Harry Potter, but boy, am I glad I did. I waited on those darn lines at the original Momofuku noodle bar in order to be able to explain succinctly to people why they shouldn't bother. I even suffered my way through a few episodes of Glee and a couple of meals at The Cheesecake Factory.

I'd never been to a P.F. Chang's until a couple of months ago, when I found myself hungry at a shopping mall with an hour to kill. I asked you guys on Twitter what to expect, and most of the responses were "overpriced, under-seasoned, mediocre Chinese-American food." I prepared for the worst, but was actually pleasantly surprised with the quality of the food there. It's mediocre, to be sure, but mediocre Chinese-American food still tastes pretty good (unlike mediocre pan-cultural food, as The Cheesecake Factory aptly demonstrates). I especially enjoyed the tofu lettuce wraps, made with ground tofu, water chestnuts, crisp mung bean noodles, and a thin, soy-based dipping sauce.

I mention this only because I think there's an unwritten rule that any article about san choi bao, the Cantonese dish of stir-fried ground meat served in lettuce cups, must include a reference to the P.F. Chang's version within the first two paragraphs, and who am I to upend the system?

The real inspiration for this recipe comes from the much more authentic version of the dish I grew up eating at the original Phoenix Garden in New York's Chinatown, a restaurant that's burned down twice but has been operating largely unchanged in its Midtown digs for the last couple of decades. As opposed to the sort of gloopy version served at P.F. Chang's, Phoenix Garden's features minced squab stir-fried with pine nuts and finely diced water chestnuts and vegetables in a way that allows each piece to remain distinct. You spread a little hoisin sauce in the bottom of a piece of ice-cold iceberg lettuce, pile some of the loose mixture into it, and eat it with your hands like a taco. This thing is all about texture as the mix of crunchy, crisp, and tender bits comes together in your mouth.

Despite the fact that it says "squab" on the menu, and I trust that they are, in fact, using squab (the price certainly justified it), I never actually got much squab flavor out of the mix. You could have told me it was chicken or pork or tofu, and I wouldn't have said boo. As in many Chinese dishes, the meat isn't the star; it's merely a supplement to the vegetables.

That makes this dish pretty ideal for veganizing. I could have used tempeh or even something like lentils or yellow split peas in place of the squab, but I happen to be a tofu fiend, so I took that route.

I begin with extra-firm tofu, which I cut into quarter-inch slabs and press firmly between paper towels to remove excess moisture. This helps it brown better in the wok.

Next, I cut it into strips, then into fine dice.

Typically, this dish uses water chestnuts for crunch. I love water chestnuts—they have a satisfyingly crisp texture that stays crisp even after cooking. The only issue is that water chestnuts can be a little difficult to find fresh unless you're lucky enough to live close to a well-stocked Asian market. Canned water chestnuts work just fine, but I prefer to use fresh produce when I can. As I was wandering the aisles of my local produce shop, I saw a pile of jicama and realized that the texture of jicama is actually very similar to that of water chestnut, and I wondered how it would taste stir-fried.

It works really, really well, and it may become my go-to vegetable for any recipe that calls for water chestnuts. Because of its larger size, it's also easier to cut a jicama into even quarter-inch dice than it is to cut water chestnuts.

The remaining ingredients are straightforward, and pretty similar to those in the squab dish, if I remember correctly. A little bit of diced celery for extra crunch and flavor; some pine nuts that I toast slowly in oil until deep golden brown; some diced shiitake mushrooms (I use fresh, but for a stronger flavor, you can use dried Chinese shiitakes that have been rehydrated in water) along with some aromatics: garlic, ginger, and scallions, plus some cilantro to finish it off.

Real Chinese restaurant kitchens have jet engine–sized burners to get their woks ripping hot and keep them hot as ingredients are added. At home, our burners are a good deal weaker, so, as with any stir-fry you cook on a home range, working in batches is key. I start by browning the tofu and transferring it to a bowl, then follow up with the shiitakes, adding them to the same bowl. Finally, I stir-fry the celery, jicama, and aromatics before adding back the tofu and shiitakes and finishing it up with a sauce flavored with Shaoxing wine (dry sherry works fine in its place), soy sauce, hoisin sauce, black vinegar, and just a touch of cornstarch to help it bind and coat the vegetables.

Unlike Mr. Chang, whose goal seems to be "soft and gloopy," my goal is to keep each element light and loose, coated with just enough sauce to give it flavor but not so much as to adversely affect texture.

The finished dish is a powerhouse of textures and flavors, with a great mix of crisp, tender, fresh, and nutty. I serve it with chilled iceberg lettuce—you can also use green leaf if you're one of those folks who, for whatever reason, can't abide iceberg—which I spread with a little extra hoisin sauce before spooning in the mixture. Inevitably I overstuff, which makes eating it a messy affair, but getting messy is half the fun, isn't it? 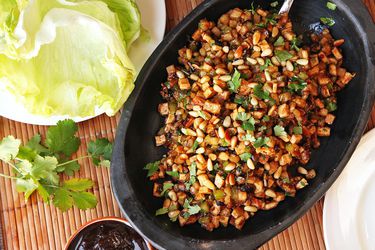 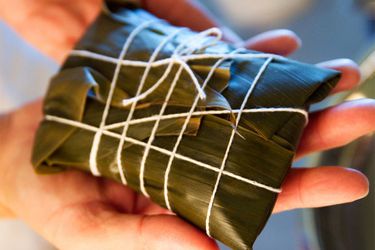