A traditional Thanksgiving spread gives me the same nostalgic pangs that most Americans feel this time of year. But I can't deny a basic fact: Even at its best, a classic roast turkey is always just a little bit boring. And so I'm left with the same decision millions of others weigh each year: whether to stick to the comfort of tradition or try to shake things up by doing something different. The risk of going different, though, is that sometimes it just doesn't scratch the Thanksgiving itch in quite the right way.

So this year, I came up with three roast turkey flavor variations that walk a delicate line, preserving the inherent turkey-ness of the turkey while giving it a significant boost in the flavor department. In each case, I use our recommended spatchcocking method, which guarantees the most evenly cooked meat, the crispest skin, and the quickest cooking time. That said, you could adapt any of these glazes, rubs, and flavorings to a more traditional method for a whole roasted turkey.

A note on all three: These birds are all so flavorful that they more than stand on their own, which means that pairing them with your typical gravy could be overkill. Instead, I recommend a light jus made from the reserved turkey spine, spooned on top for a little extra moisture. (Of course, if you want to go ahead and make gravy anyway, nobody's gonna stop you!)

Read on for a description of each.

Taking a page out of the Louisiana playbook, this turkey is rubbed all over with a fragrant, lightly spicy mix that includes paprika, cayenne pepper, coriander seed, cumin, black pepper, onion and garlic powders, and both dried oregano and dried thyme. The result is a rich, deeply flavored bird with a gorgeous rust-colored skin. It's different, yet recognizably all-American in the best sort of way.

I used a light hand with the rub in my recipe, which I felt was more likely to make it a crowd-pleaser. But if you're confident that you and your guests can handle a heavier spice load, I think you can safely increase the rub by 50%, if not fully double it, and get great, more intensely flavored results.

When this idea occurred to me, I knew instantly what a stroke of genius it was—the woodsy herb, fennel, and garlic flavors in a classic Italian porchetta are an absolutely natural match for turkey. Then I discovered that Kenji had beaten me to the punch with his own turkey porchetta recipe. What can I say—great minds, right?

I forged ahead with this version, though, since mine is decidedly less of a project than his. While Kenji goes full-on porchetta—starting with skin-on boneless breasts, rolling them up into a cylinder with the skin wrapped around it, and carefully cooking it—I take a much lazier route.

I just shove the seasonings under the skin of a whole spatchcocked bird, throw it in the oven, and call it a day.

The most amazing part is just how seamlessly this Italian-influenced bird fits with the rest of the Thanksgiving table. If I didn't know better, I might guess this was the original way the Pilgrims cooked their turkey back in the day. But I do know better: They were ascetics, and had no room for the hedonistic joys of life. Let's not follow in their exact footsteps. A good place to start is making this.

This idea, admittedly the most unusual in the context of Thanksgiving, popped up while I was reading Fuchsia Dunlop's newest book, Land of Fish and Rice, in which she describes the Chinese practice of "red braising" meats in a potent broth of soy sauce, Shaoxing wine, sugar, and aromatics like ginger, cinnamon, and anise. It's a technique I used to use years ago when I worked in restaurants: I'd keep a big container of the braising liquid for preparing the nightly staff meal, using it to cook unused duck legs from time to time and topping it up as needed. That got me thinking—why can't I make a glaze out of this stuff and shellac a turkey in it?

The results are great. The turkey comes out with a deep, dark, and sticky salty-sweet glaze that's profoundly savory and concentrated, infused with the aroma and flavor of the ginger and spices. It's also more than enough to fully season the bird, so there's no need to add any other salt at all. The added sugar in the glaze means it'll burn if you apply it on top of the bird right from the beginning. I start by giving the underside a light coat of glaze, brushing it on the top only as it gets close to finishing.

Since this one is the biggest outlier, you might want to harmonize some of your other dishes by spiking your cranberry sauce with fresh ginger and slipping some Chinese sausage into your stuffing. On the other hand, I think the glaze's bold savoriness can stand on its own, without requiring the rest of your meal to conform to it. 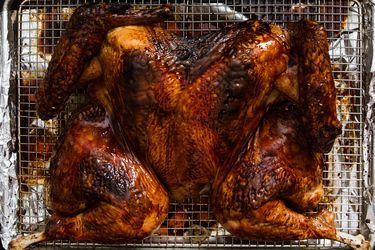 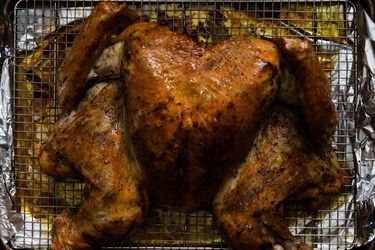