Do you know how freaking little lamb gets eaten in this country? It's a pretty shocking statistic. According to the USDA's Economic Research Service, in 2008, only 1 pound of lamb was eaten per capita. One pound! In A whole year! Compare that to the 64.1 pounds of beef, 48.9 pounds of pork, or the whopping 83.9 pounds of chicken we eat each year. And that's a record low. Lamb consumption peaked at 4.2 pounds per capita in 1960 and has been steadily decreasing.

What's even more shocking is that back when I used to work for a food magazine that took surveys and data very seriously, I learned that over 90% of people in this country don't eat any lamb at all. None! In fact, much like the wealth is distributed in this country, the top 1% of lamb eaters consume about 90% of the lamb—mainly Middle Eastern and Central/South American minorities.

Of course, living in a large coastal city you might not notice that. Lamb is on almost every menu out here and seems to be getting ever more popular (lamb neck pastrami, anyone?). Even the burger scene is becoming a bit more sheepish these days.

Indeed, some of my favorite burgers in the city are made from—gasp!—lamb. Here are three of the very best.

I've never made a secret of my love for April Bloomfield's cooking. The Spotted Pig is no doubt my favorite restaurant in the city, and John Dory is no slouch either.

But the Chargrilled Lamb Burger ($21) at The Breslin. Man, is it good. Not falling into the shove-it-full-of-aromatics trap that so many inferior lamb burgers fall victim to, the burger here is nothing but lamb and salt. Perfectly cooked every time, insanely juicy with the intense grassy funk of a well-seared, well-fatted lamb chop, it dribbles and drips as you eat it in the most glorious way. Toppings are kept simple with just a few thin slices of salty feta cheese and red onion.

At first you might be afraid that the sturdy roll is going to overwhelm or crush the meat, but it all works out in the end—this lamb is tough enough to fight back. It's no wonder there's a constant parade of them coming off the grill.

It all comes with a side of cumin-scented mayo, but I never apply it. Rather, save that for dipping your thrice-cooked chips into—can I say that these are the best fries in the city? I really mean that.

What I really love here is that April is a true chef's chef. More often than not you spot her in the kitchen salting, sweating, and scrubbing down flat-tops shoulder to shoulder with her line cooks. Maximum respect for that, Ms. Bloomfield.

I don't know why the Lamburger ($15, pictured at top of page) at Balaboosta doesn't get written up more often. Not quite as lamb-heavy as The Breslin's, but well-balanced, well-seasoned, and crazy juicy in its own right. In the center of the patty is a oozy glob of herb-flecked fresh goat cheese. A kissing cousin to the Jucy Lucys of Minneapolis, if you will. Necessary? No. Tasty? You bet. A massive pile of sweet and tender confit onions are slathered on top, while the bottom bun is protected by a layer of light and creamy house-made mayonnaise.

If you're the kind who likes pickles (I am), you'll want to add some of the mustard-seed heavy bread & butter chips that come on the side. If there's one complaint to be made, it's that the burger is a bit too juicy for the brioche bun from Il Forno Bakery (isn't brioche always too tender?). Eat fast, or you'll end up having to use a knife and fork.

A side of crispy-creamy fried potato chunks is good, but if you want the perfect side, go for an order of fried olives ($7). Addictively salty and served with some tangy labne and fiery harissa oil.

So not technically a complete lamb burger, but the Grilled Burger ($15) at Prune has got 20% lamb meat added to a beef base, which puts it well above the national average. It's certainly enough to make its mineral funky presence known. It's not the most appealing-looking burger in the world—It's soft-ball shaped and must be pressed down to fit into its English muffin cradle—but the flavor is phenomenal.

It's the simplest of the bunch as well. All it's got is a good amount of scallion-parsley butter spread over both sides of the heavily toasted muffin, a simple sprinkle of salt and pepper on the meat itself, and a thick slab of melty 4-year-old Cabot white cheddar cheese.

The fries are of a superlative McDonald's-esque nature.

*Prune has since closed. 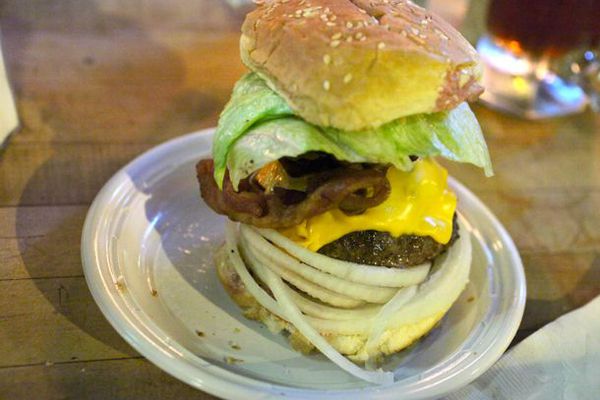