Stella's take on the famous Nordstrom's tomato basil soup uses carrot purée and just a splash of cream to create a thick, hearty, and warming meal.

Stella Parks
Editor Emeritus
Stella Parks is a CIA-trained baking nerd and pastry wizard, dubbed one of America's Best New Pastry Chefs by Food & Wine. She was the pastry editor at Serious Eats from 2016 to 2019.
Learn about Serious Eats' Editorial Process
(5)
0

Long before I started writing for Serious Eats, I stumbled across the site on a rainy day when I was craving a bowl of tomato soup. The recipes I'd found elsewhere, with embellishments like sherry, Parmesan, and caramelized onions, didn't resonate with my childhood memories. Don't get me wrong; those things sound objectively delicious, but a craving's a craving, you know? That dreary night, I wanted something simple and hearty, which I found in Nordstrom's tomato basil soup.

Sure, it was loaded with carrots, but I figured that their sweet flavor wouldn't really come into play so much as it would offset the acidity of canned tomatoes, and I was right. Once puréed, they provided a creamy backbone to the soup and an element of freshness that breathed new life into the tomatoes. That was more than nine years ago, and I've been making that soup on the regular ever since.

Those were the days before Kenji's 15-Minute Creamy Tomato Soup (and its hyper-lazy five-minute spinoff, the No-Cook Blender Tomato Soup), and, while I've come to appreciate having such lightning-fast methods on hand, I can't help but feel nostalgic for my first taste of Serious Eats.

Besides, my career involves snacking on a nonstop parade of cookies, cakes, and breads both quick and slow, so I'm always on the hunt for recipes that will bring more vegetables into my life, and that's exactly what the Nordstrom tomato soup does.

Of course, being the meticulous nerd that I am, I couldn't help but turn some of the recipe's vagaries into more concrete directions for myself. For starters, I converted the ingredients to weight—not because tomato soup requires extreme precision, but because subjective measurements, like "large" carrots and onions, had led to inconsistent results.

Some readers complained the soup was hopelessly bland, while others deemed it too carrot-y, while folks such as myself couldn't love it more. Quantifying those ingredients into exact amounts helps everyone land in the Goldilocks zone, where the soup tastes both flavorful and mellow.

As pastry chefs are wont to do, I traded the olive oil of the original for butter, which browns as the vegetables sauté to give the soup a nutty depth. Ditching olive oil also pushes the overall flavor toward classic Campbell's—ever the North Star of my tomato soup adventures.

Once you see some nice browning along the bottom of the pan, add the tomatoes and a quart of chicken stock; homemade if you have it, or the low-sodium variety if store-bought.

Where the original recipe calls for just 20 to 45 minutes of simmering, in my experience, it takes about twice as long. First of all, we're talking about something that contains 135 fluid ounces of liquid ingredients; rushing things will only result in the watery soup that some folks complained about.

An extended cooking time also eliminates the intense carrotiness that a few readers mentioned, creating a mellow flavor that puts tomatoes front and center. Beyond that, taking your time to simmer the soup will tenderize the carrots, for an even creamier purée.

Since the acidity of the soup will vary depending on what brand of canned tomatoes you choose, I'll often add a pinch of baking soda for balance. If you suspect you may need some help in that department, give the soup a taste.

Once it's to your liking, it's time to purée the soup. If you don't have an immersion blender to get the job done, be sure to let the soup cool a bit before transferring it to a countertop blender; otherwise, the steamy buildup from the hot soup may pop the lid. You can strain the soup if you like, but the tender vegetables make for a remarkably creamy purée on their own.

So creamy, in fact, that I've halved the amount of actual cream involved. It's not that I'm looking to lighten things up, only that I prefer that richness in the form of a gooey grilled cheese sandwich. If you'd rather embrace a creamier tomato soup, by all means, add more! Or, if you'd like something soupier, feel free to thin it down with an extra splash of stock. The consistency is completely up to you.

From there, the soup is seasoned with salt, pepper, and a pinch of cayenne. While the original called for adding dried basil to the carrots and onions, it's not something I keep on hand, so I finish with fresh basil at the end. Either way, restraint is key; the aromatic herb goes a long way to round out the flavor of the tomatoes, but too much can be distracting.

Happily, the recipe makes about 12 cups—enough to feed an army, or at least a big family over the course of a rainy weekend—but even if you don't need that much, the soup freezes so well that I've never been tempted to cut the recipe in half. Once you try it for yourself, you'll see what I mean.

The size of a "medium" onion or a "large" carrot is inherently subjective, so the specifics of the vegetables listed above are meant as a guide rather than some draconian rule. The recipe itself works quite well give or take a few ounces either way.

In a sealed nonreactive container, tomato soup will keep up to one week in the refrigerator, or six months in the freezer. 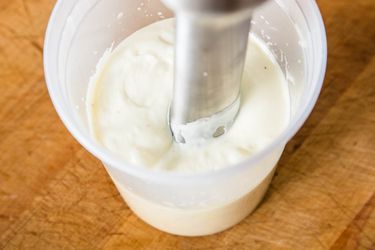