In my Vegan Experience entry from a couple days ago, I drew a conceptual map charting my cravings. Along the bottom axis was how badly I wanted to eat something, and along the left axis was how meaty that thing was. In the far bottom right corner, at maximum crave and minimum meatiness level was one single word: pizza.

The word means many things to many people, but for most of us, the very first thing that comes to mind is a round disk of flat bread, baked at very high temperatures so that it achieves a crisp, lightly charred outer crust and a soft, pillowy, pliant crumb, topped with a sauce of minimally seasoned crushed tomatoes, extra-virgin olive oil, fresh mozzarella cheese, and perhaps a bit of basil.

But the real question: can vegans still enjoy great pizza?

I've thought long and hard about this question and come to a couple of conclusions. The first, and most important, is that yes, indeed vegans can enjoy pizza every bit as tasty and satisfying as a non-vegan pizza. However, not all styles of pizza can be made in a satisfactory matter.

The key to great vegan pizza? It's exactly the same as the key to great cheesy pizza: it comes down to the pieman's craft, the tools being used, and the quality of the individual components, the most important of which is the crust.

When I asked Ed, he nailed it right on the head:

Can vegans still enjoy pizza? Yes, but it depends exclusively on the pizzaiola's skill and the ingredients being used. A great Marinara pizza (made at places at Una Pizza Napoletana in SF, Pizzeria Bianco in Phoenix. and Motorino in NYC), which has no cheese, is a wonder to behold and a treat to eat. Ditto for a great slice of pizza bianco, made in NY at Sullivan Street Bakery and at Grandaisy, which also has no cheese, but gets plenty of flavor from the rosemary, sea salt, and olive oil that go into it.

Some of the greatest pizzas I've had in my life—the pizza bianca at Forno Campo de'Fiori (here's how to make your own version at home), the marinara pie from Motorino, the Red, White, and Greenpeace from Paulie Gee's—have been 100% vegan, and I loved them without even thinking to myself that I was avoiding meat and dairy at the time.

What did all these pizzas have in common? Perfect crust and great ingredients, skillfully manipulated by a master craftsman.

When flour, water, salt, and yeast come together in the hands of a craftsman and get manipulated into perfectly bubbly, crisp, charred pizza crust topped well-balanced fresh, bright, flavorful vegetables, it's one of the most perfect foods out there.

What About The Cheese?

I can hear you skeptics now: What about the cheese?

Well? What about it? I'm a firm believer in the idea that great pizza is defined by the quality of its crust, not by its toppings, and as such, by my personal standards of judgment, perfectly satisfying pizza can exist in a completely cheese-free realm.

That's great, you're saying, but don't you sometimes just crave that fatty, gooey, cheesy, greasy stretch? The answer is of course. Sometimes.

I stand by my assertion that cheese doesn't make or break a pie under certain circumstances—the skilled craftsman circumstances—but yes, there are certain styles of pizza that absolutely require cheese. Ed went on to say, "but ordering a vegan slice with no cheese at a regular NYC slice place is a very bad idea," and again, he's right.

That style of pizza—from the middle-of-the-road corner slice down to the frozen snack variety—needs the cheese to come together in a satisfyingly greasy, filling way.

The good news: there are a number of vegan cheese options out there made from soy milk or or other nuts.

The bad news: none of them come close to the real thing. Most vegan melting cheeses are abysmal. Grainy or bland, with poor melting characteristics, they may look vaguely like cheese, but they taste of sadness and sawdust.

At Paulie Gee's in Greenpoint, an entire section of the menu is devoted to vegan pizzas (go Paulie!). The cheesy options are made with Daiya, the king of vegan cheeses, prized for its realistic melting characteristics and "cheesy" flavor. And indeed, the stuff does melt, though it's more in a Velveeta-esque manner than actual stretchy mozzarella.

It's the flavor that's terrible though. It tastes like the worst kind of American cheese with no freshness, no complexity, simply salt and fat. If you're really desperate for a cheese fix, it might vaguely satisfy you, but I cannot see myself ever wanting to let it pass my lips again, confirming my thought that when it comes to faux meat or dairy products, you can't help but compare it to the real thing, and in that comparison, the faux product comes up woefully short.

My advice? Forget about the cheese, and forget about eating the type of pizza that requires cheese to be good (hey, nobody said being vegan would be easy!). Instead, focus on what does work. If you take the time to search out the best of the best, you'll be rewarded.

For instance, the last pie I had at Paulie's, a simple marinara pie with extra garlic, basil, and a drizzle of aleppo chili oil was simply phenomenal. Bright, fresh, acidic tomatoes, garlic sweetened by a trip to the pizza oven, a nice smoky char on the intensely flavorful crust, a whiff of basil, a touch of heat, and plenty of richness from the chili oil.

As A Vegan, The Average Pizza Will Be Better

An omnivore has a wide range of pizza options, mostly falling into the middle-to-low-end category. A vegan, on the other hand, has two options: excellent cheese-less pizza made by a craftsman, or poor pizza made with vegan cheese or no cheese at all.

As an omnivore, I spent a lot of time eating that mediocre pizza just walking down the street—either in the name of research or in the name of drunk-food—because it was an easy option. That won't happen as a vegan.

So while the total amount of pizza I consume may drop considerably, I can guarantee you that the average quality of the pizza I eat is going to go way up, for as a vegan, I won't fall into the trap of eating any pizza that's short of extraordinary.

By the way, I was dining at Paulie Gee's with my mom and my wife. At the end of the meal, guess which pies had the least leftover slices? That would be the two cheeseless, vegan pies. 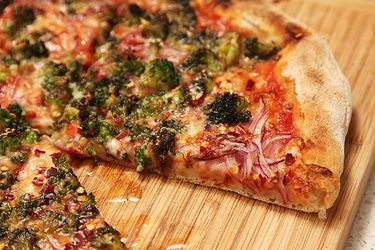 Top This: Why Don't We Put More Broccoli On Pizza?