Only as I roll out of bed do I realize that this whole thing starts today. What did I do for my last meal before the plunge? In retrospect, I should have ripped into a big bloody steak. Perhaps slaughtered and plucked my own duck before consuming its breasts, crisp-skinned and medium rare. At the very least, a good burger would have been a nice send-off.

But no, my last meal, ironically, was nearly all vegetarian. Patatas bravas and fried olives from Balaboosta, along with crispy cauliflower in a tangy caper vinaigrette and a grilled pizza topped with carrot puree, goat cheese, and a bit too much cumin. Indeed, the only meat I consumed was a single bite of fluke sashimi. Is it a coincidence that my last meal before going vegan was nearly vegetarian, or was it just a fluke?

No matter, after weighing myself (176.2 pounds), I walked to my fridge and came to the startling realization that going vegan would actually take a bit of planning. Cheese, eggs, yogurt, milk—all my typical breakfast fare—was staring me in the face, daring me to find something in there I could eat. I closed the door and instead reached for a box of cereal, which I thought I'd consume milk-less.

Too bad Honey Bunches of Oats is made with honey, and honey is made by animals.

I'm honestly not much of a breakfast or bread eater to begin with, and I was just about prepared to throw in the towel and skip it today, when I remembered the oversized box of steel-cut oats I keep for making Hambone's dog food and immediately after that remembered the nice jar of raspberry-cranberry jam I'd made just a few weeks before.

As my oats toasted in a dry skillet (the best way to prepare oatmeal before adding water!), I thought to myself great—my first vegan meal and I've already resorted to eating dog food.

All kidding aside, toasted oatmeal with cranberry and raspberry with a drizzle of maple syrup makes a killer breakfast, even for non-vegans.

It also made me realize that my entire refrigerator was in need of a makeover.

Cheese, dairy, and eggs got pushed to the back (I would've thrown them out, but my wife has decided to take the easy way out and only maintain a vegetarian diet during this month). Bacon moved to the freezer. Various sauces and condiments flavored with animal fats or little salted fishes got sorted and stuck on a different shelf lest I accidentally grab them through force of habit.

I was quickly learning that this would require near constant vigilance. There are animal products hiding everywhere.

I patted myself on the back as I put my wool coat back in the closet and headed out in the cold in a cotton sweater and synthetic ski coat. I even felt good as I handed off an unused Steak 'N Shake gift card to my non-vegan friends, but immediately realized that I'd just pulled it out of my leather wallet. D'oh!

Note to self: relocate my old duct tape wallet and transfer goods.

After a shopping excursion yesterday, I started out today much better prepared. I quickly realized that if breakfast was going to be interesting in any way, I'd have to expand the parameters of what I normally consider to be breakfast foods.

Toast drizzled with extra-virgin olive oil and sprinkled with parsley, garlic, and red pepper flakes? Hey, my wife might not like the effects it has on my breath, but it makes for a fine start to the day.

The real challenge today: entertaining a dozen friends who are coming over for a guacamole tasting (stay tuned for all the recipes!). Thing is, I'm a vegan now, but none of them are, and not all of my readers are, which leaves me at a conundrum. Do I enforce my vegan views on my guests as well? If I'm coming up with a couple dozen variations for guacamole, isn't it my professional duty to stick cheese in at least one of them?

This does, of course, bring up the larger issue that just as with any philosophy, veganism is not stark black and white. There's an ordered spectrum ranging from "I do it but I fully support your meat-eating choices and don't even mind helping you out with them" on one end, and level-five-vegan don't-eat-anything-that-casts-a-shadow on the other. Where you lie on that spectrum is not just a matter of your beliefs, but also a question of how you want to spread them.

While it might be tempting to take a hard-line approach and actively proselytize your meat-eating friends, is it really the best way to convince them of your views, (or, for that matter, even keep them as friends)?

A friend of mine told me a story about a girl he knew in college who once dumped an entire tray full of food in the garbage because she noticed that piece of macaroni and cheese had fallen into the same salad bowl that she'd taken some salad from. Perhaps she's doing the right thing by making no compromises with her morality, but she's certainly not doing a good job of convincing anyone of her views.

He went on to give the following example: let's say I'm getting mugged and I'm rescued by a cop on horseback. Now, as a vegan, I don't condone the exploitation of animals for any human use. Do I turn to the cop and tell him, "thank you officer, but the true crime is what you're doing to that horse!"

If you're familiar with Sacha Baron Cohen in his Ali G pre-Borat days, you've probably seen the interview in which he says to an animal rights activist "Here's a chicken. You eat this chicken, or we kill another chicken." How many chickens would have to be saved to get a vegan to eat another chicken?

Is my veganism purely a utilitarian endeavor, or is my avoidance of meat a Kantian categorical imperative?

Of course, these two examples are pretty absurd, but the basic question of the level to which you take your veganism doesn't have an obvious answer to me. There are some situations where the choices seem obvious. I won't be roasting a prime rib for my friends this month. I also won't be throwing out my wife's eggs or milk this month. But do I allow non-vegan snacks at my party?

In the end, I decided that in the interest of not annoying my friends and family more than my veganism already will/does, I'd avoid as much as possible becoming a vegan evangelist.

We'll see how easy that attitude is to continue in practice.

For the record, I did make a batch of blue-cheese flavored guacamole and another version with crab meat, though I did not partake of either (my wife did—cheater!) 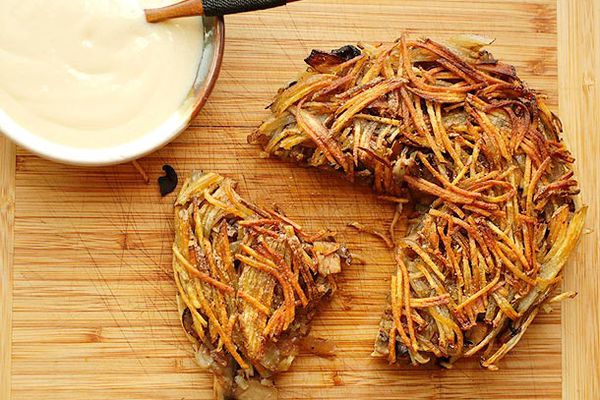