How to Make Paella

Traditional paella is cooked in a huge pan over a massive fire. The even heat provided by that fire helps to offset the steel pan's inherently poor conduction. When cooking paella on the stovetop, however, your heat source is limited to your burner size. The first step: Give up on paella for a crowd and make small batches for fewer people instead.

I routinely bite off more than I can chew. Just the other week I nearly asphyxiated when I shoved a handful of potato chips into my mouth, creating an oral-impaction I wouldn't have thought possible. The chips pressed at the precipice of my throat, held there by my tongue, which had gotten locked against the roof of my mouth by a crisply-fried logjam that extended all the way to my lips. Any attempt to resolve the situation by pushing the chips out or crushing them caused the pieces near my throat to slide closer to the drop. I barely escaped alive.

There's a lesson there, which is that you sometimes have to scale back your ambitions, but I'm not sure I've learned it yet about feeding myself, given that just yesterday I nearly clogged my esophagus with rice, having forgotten to do things like chew and swallow between bites.

I have, however, come to terms with going small when making paella.

That's not to say you can't cook a great paella big enough to feed a crowd, but you need to do it over a live fire or on a grill. If you're planning on cooking indoors on the stovetop, you have to make a much smaller paella using a pan not much larger than 12 or 13 inches across, or even smaller. That's big enough to feed about four people at most.

There's a simple reason for this: stovetop burners produce a ring of flames that, even on the fanciest models touting the highest BTUs, are rarely more than eight inches across. This inevitably creates hot spots in a larger pan. If the cookware you're using conducts heat well, those hotspots will be minimized, but they won't be eliminated. For most recipes, that's not a problem—simply stir the food around from time to time and everything will cook evenly.

The challenge with paella is that it almost shouldn't be stirred at all once the rice goes into the pan. "Sure," you might say, "That's what the traditionalists tell you. But I'm not a traditionalist, and if stirring my paella rice is the solution to the problem, then I'll damn well stir it!" I usually like such a defiant attitude, but in this case it won't work. Instead of making paella, you'll end up with something that looks more like risotto.

The resulting paella, if done right, has plump grains of rice that are lightly glazed in fat and, very importantly, not glued together or suspended in a creamy sauce. If you stir the rice while it cooks, though, you'll release more and more starch into the broth, thickening it and binding the grains together. By using a smaller pan that's properly sized to the burner, you won't have to stir it.

The most obvious pan to use is a traditional paella pan, and indeed you can, but it helps to understand its construction. Traditional paella pans are made from thin sheets of steel. Steel is a particularly bad conductor of heat, which is why stainless steel pans almost always have some kind of conductive core, like the aluminum sandwiched inside the steel exterior of a tri-ply pan. A paella pan's doesn't have a conductive core, so it heats unevenly due to the steel's poor conduction. That doesn't matter when you have a large and even source of heat underneath the pan, as one does when making paella the traditional way over a live fire, but on a stovetop burner it can be a problem. 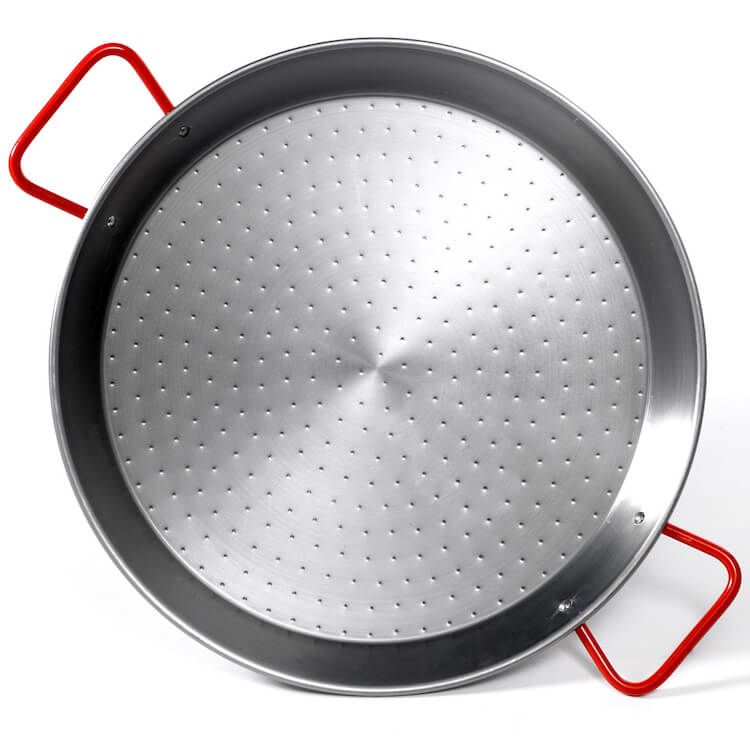 The thinness of the steel has an important purpose as well—it reduces the thermal mass of the pan, making it especially responsive to temperature changes. Paella pros take advantage of this, building up a huge fire under the pan to get it blazing hot, then raking the burning logs and embers away to quickly reduce the temperature. This allows for extreme browning and flavor development during the searing and sautéing stages, followed by gentle heat to cook the rice without instantly scorching it on the bottom.

None of this maps well to the stovetop, where the burner's ring of flames is unable to heat the pan evenly. The primary way to deal with the uneven heating is to use a pan that's appropriately sized to the burner. Beyond that, you can mitigate this somewhat by using a different pan with better heat conduction, like a straight-sided tri-ply sauté pan. That'll heat more evenly, which is a plus, but it'll also retain heat longer, which comes with its own risks—if you're too aggressive with the heat, you could end up burning your rice before you've realized that you needed to turn the heat down.

You can, alternatively, stick with the traditional paella pan, which I did for all the recipe testing for these recipes. It doesn't heat as evenly as a tri-ply pan, but its thinness makes it more responsive to heat adjustments. After that, you just need to monitor the bubbling pattern of the stock as the rice simmers in it. You'll be able to tell where the areas of higher heat are, giving you a clue how to rotate and shift the pan on the burner so that all sections get their share of activity.

If only I could be so thoughtful about how I eat the paella once it's done. 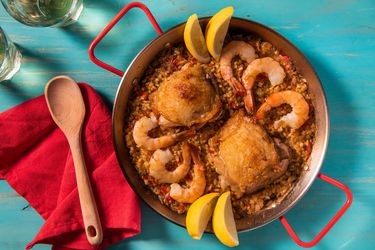 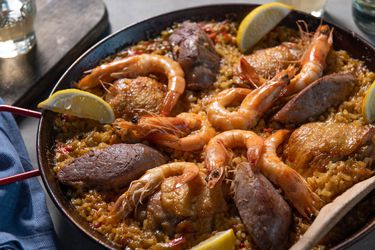 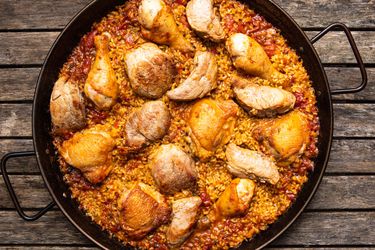 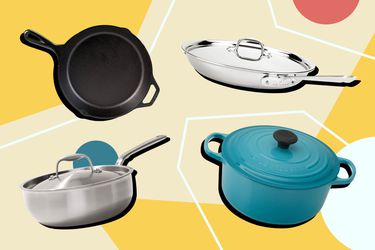 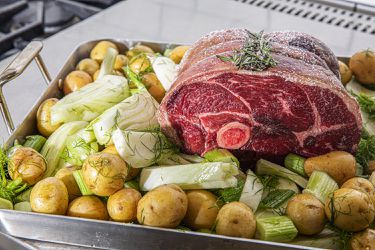