I came out with the early word on the Baking Steel, a product which at the time was in Kickstarter mode trying to raise enough money for their first run. Thanks to crazy pizza heads like you, they managed to blow past their initial investment requirements by several thousand dollars. By all accounts, founder Andris Lagsdin is in over his head trying to keep up with demand on that first run. This is good news for him, and even better news for home piemakers, because I've got to tell you: This is the most impressive home pizza product I've ever tested.

I've been making the finest indoor-oven pies I've ever made in the last few weeks. Better than what I can get with my inch-thick stone. More consistent than what I get from my skillet-broiler method (my previous go-to). And of course, easier than setting up the also-awesome KettlePizza insert on my outdoor grill.

By all accounts, this is the answer I've been waiting for to produce consistently awesome pizza over and over, straight out of the box.

The folks over on the pizzamaking.com forum have been talking about using steel plates to bake pizza for a number of years, but the concept really hit the big time when Nathan Myhyrvold recommended it in his uber-cookbook Modernist Cuisine. After seeing a demo of the process, Andris Lagsdin, a former employee at Todd English's Figs chain of pizzerias realized, hey, maybe there's a business opportunity here. And thus was born the Baking Steel, a 1/4-inch, 15-pound plate of food-grade steel designed to be used in your oven as a replacement to a traditional pizza stone.

It's the same concept that makes the skillet-broiler method work, but it makes the whole affair much easier, as well as offering you a thicker metal base than any cast iron pan I can imagine.

On paper, the idea makes sense. Metal conducts heat better than stone and it stores more heat per unit volume than stone—both key characteristics to creating a pizza that cooks up both light and crisp with the characteristic hole structure and char that you look for in a good Neapolitan or New York-style pie.

I've made over a dozen pies in the past week testing out the stone in various configurations, as well as various recipes, and in every single case it produced results superior to anything I've ever been able to make with a standard stone. Here are a few highlights:

To start with, I made two New York-style pies baking them exactly as the instructions on the baking steel recommend—the steel in the bottom of the oven, the oven on full blast for 45 minutes. My basic New York Style Pizza recipe gets baked on a stone in a 500°F oven, which results in a bake time of around 12 to 15 minutes.

The steel, on the other hand, stabilizes at around 450°F (though in some tests it peaked at closer to 500°F). This is due to the steel's radiative properties. It's constantly giving off heat even as it absorbs it, causing it to stabilize at a temperature that's slightly cooler than the air around it.

I measured the air temp in my oven with a dry bulb thermometer that registered between 500°F and 550°F, depending on the oven's cycle.

Now you may be thinking, wouldn't a lower floor temperature lead to longer cooking times and therefore an inferior pizza? The answer is no, and it has to do with the relative conductivity of the two materials. Even though the steel is cooler than the stone, it is far superior at transferring its energy to whatever is placed on top of it than the stone, which more than accounts for the lower temperature.

It's the same principle that allows you to stick your hand in a 212°F oven, while sticking it into a pot of boiling 212°F water would scald it.

The stone-cooked version came out the way my New York pies usually do (that is, excellent), with some nice bubbling, melted cheese, and a golden brown crust with a few darker spots, all in about 8 minutes.

My baking steel-baked pie, on the other hand, was brown and bubbly in just 6 minutes, with a more appealing, spotty browned crust.

Here's where you begin to see some real differences

With the stone, the undercarriage was a relatively even brown with a few slightly lighter and darker spots. It was moderately crisp, with a fair amount of chew.

The undercarriage of the steel-cooked pie, on the other hand, was a near-flawless example of what a New York slice should look like, with a mottled brown crust and plenty of dark and light spots. On top of that, it was supremely crisp.

How does the baking surface affect hole structure? Well those crust holes develop when air and water vapor trapped inside the dough matrix suddenly expand upon heating in a phenomenon known as oven spring. The faster you can transfer energy to the dough, the bigger those glorious bubbles will be, and the airier and more delicate the crust.

Stone showed decent structure here—better than 99% of what you'd get out in the wild—but still a bit flat towards the rim.

Let's see what we get with steel:

Whoah bubbles! Check out those holes. This is a fine crust indeed, the kind that makes you want to pick up your neighbors bones and eat them. (p.s. don't do that, it's rude.)

So just straight out of the box used exactly as directed, it shows a few pretty clear advantages over a regular stone.

With A Second Stone

Now that I have both a stone and a steel in my oven, for my next test, I tried emulating a more traditional pizza oven by placing my stone on one shelf with the steel on the shelf just underneath it. The idea is that radiant energy from the stone would help cook the top of the pizza faster, creating better charring on the top surface, and hopefully reducing cook time even more. Here's what I got:

The pie stuck to the peel a tiny bit as I was transferring it, which it why it's not perfectly round. Don't you hate when that happens?

Nonetheless, the browning was indeed superior, with an even poofier edge crust and some great blistered bubbles. Unfortunately, most folks don't have two stones. No matter, there's an even better way to cook pies:

This is where things really took a turn for the better. The skillet-broiler method is was my go-to method for cooking pies, but you can consider me officially converted to the Baking Steel-broiler method.

For this pie (and a number of other pies since), I heated up the baking steel on the second-to-top shelf of my oven set at 550°F until it was holding a steady temperature (this took about half an hour, the steel held steady at around 500°F). Then just before sliding the pie into the oven, I cranked up the broiler to high. (I have an oven with a broiler on the top shelf. If your broiler is under the oven, you'd have to preheat the steel under the broiler).

In order to ensure that the broiler didn't cycle off (it has a thermostat that shuts it off if the oven gets too hot), I kept the oven door barely cracked with a metal spoon, like this:

The first pie I baked cooked in just under four minutes, and the half dozen I've baked using this method since have all been in the three and a half to four and a half minute range.

Here's the thing: You're never going to be able to produce a perfect Neapolitan-style pie in a home oven. They simply don't get hot enough. A traditional Neapolitan pie is baked in a wood-fired oven with a floor temperature of 700 to 800°F, and an air temp that can push 1,000°F near the dome. Pies cook in about 90 seconds. You need this kind of temp to get the supremely blistered, poofy, black-and-white beauties that the finest Neapolitan joints produce.

That said, there ain't no harm in trying to get as close as you can, right?

I baked a few pies using my standard Neapolitan pizza dough recipe. It's pretty basic—finely milled flour, water, yeast, and salt. That's it. Like my last New York pies, I baked it on the second to top shelf (no room to fit a pie if I put the steel on the very top shelf), with the broiler cranked full blast.

The toppings were simple and traditional: sauce (made with crushed San Marzanos and salt), buffalo mozzarella, olive oil, salt, and fresh basil leaves.

This pie took just under 4 minutes to bake. Not half bad from the top. Obviously you're not going to get the level of charring and spotting that you look for in a perfect pie, but I'm pretty pleased with the large bubbles and general cooked-ness of the pizza.

Again, this is where the Baking Steel really shines—producing a fantastic crisp, thin, spotty crust.

And the holes look pretty great too—a thin layer of browned crust, with plenty of super-airy tender bubbles inside.

Verdict: It's a keeper. Definite keeper.

Bonus points: on top of its clear thermal superiority, it's also far more durable (how many of you have cracked a pizza stone, raise your hands?). And, as I found out after I laid it to rest on top of my stovetop after my first day of pie making, it fits over two burners perfectly, allowing it to double as a stovetop griddle. I'll be making french toast and eggs for a crowd on this baby from now on.

Andris, you out there? If you get the message, design a model that's reversible with a griddle with a grease trapping channel on the second side!*

*Editor's note: This griddle now exists! You can buy it here.

New to the lineup is a half-inch (and even a 3/4 inch) model, which Slice will get its hands on in a few weeks. Just thinking through it, I can't imagine that the benefit of an extra quarter inch of steel will outweigh the cost of having to pick up and move a 30-pound object around my kitchen—the 15 pounds of the 1/4-inch version nearly threw out my back as is, but I promise we'll report back in a few weeks. 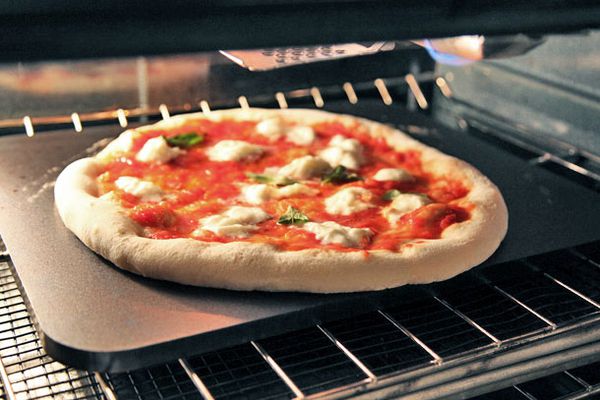 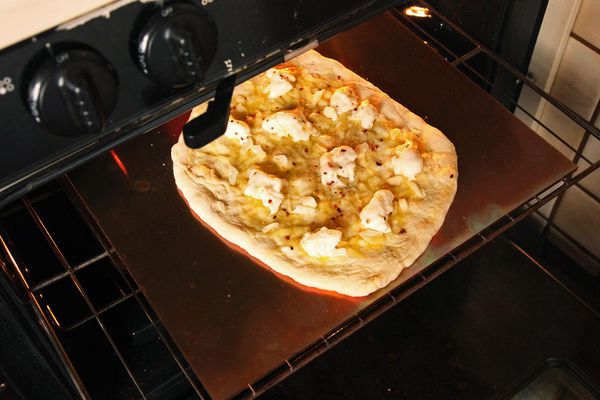 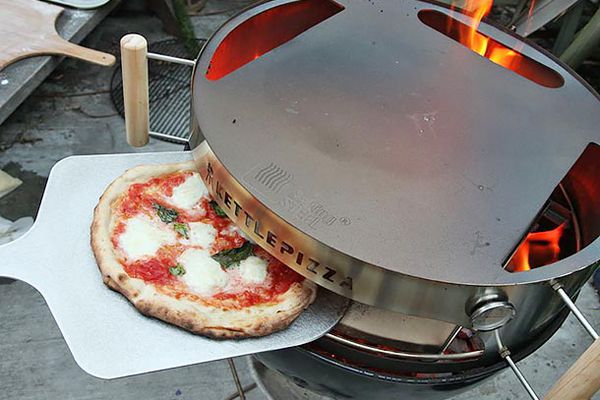 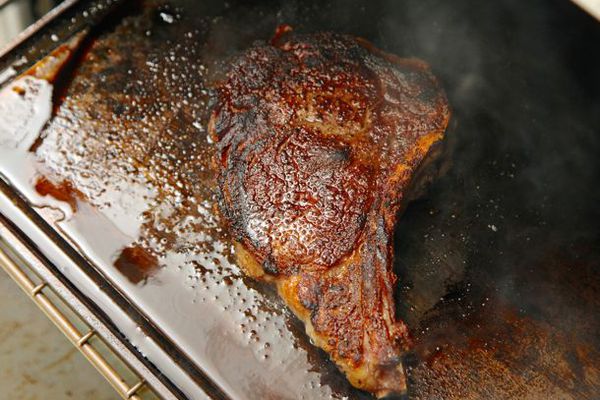 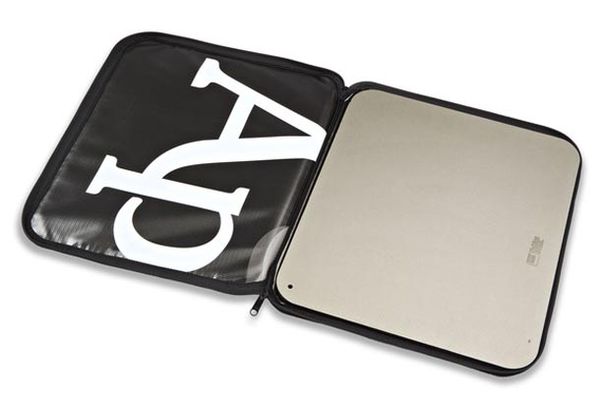 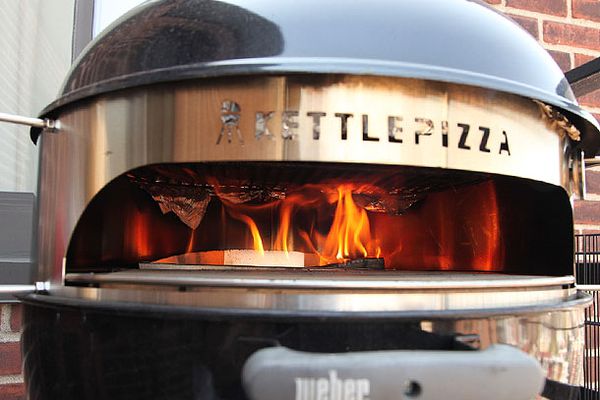 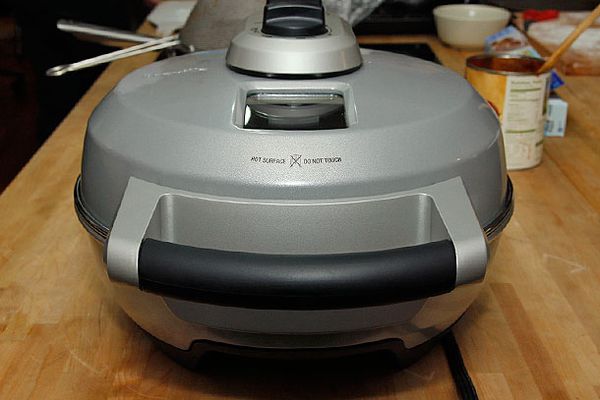 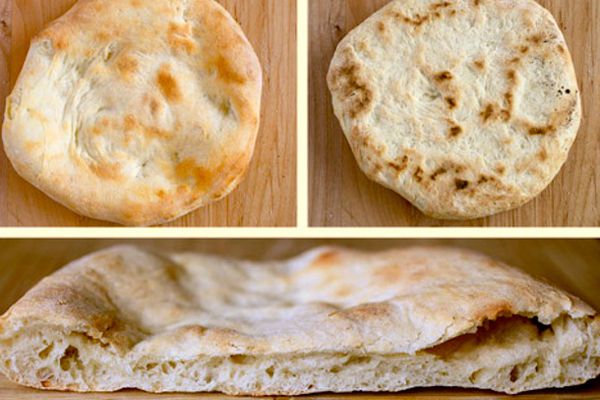 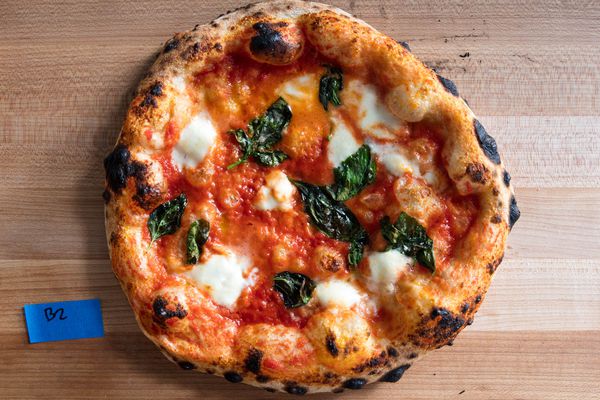 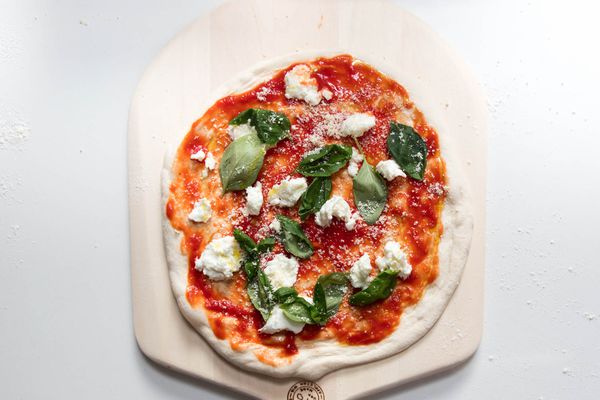 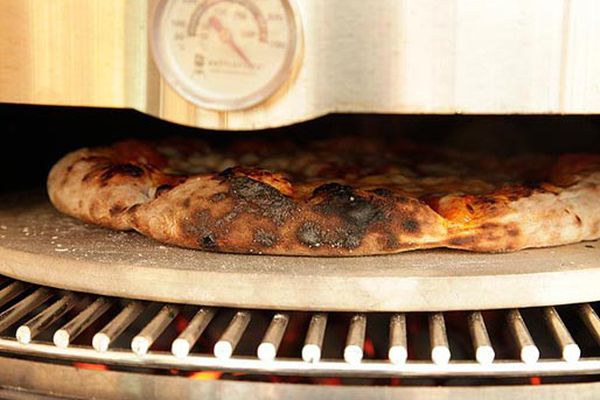