Learn about Serious Eats' Editorial Process
(4)
0
In This Recipe

For a crowd-pleasing meal of offal, there's no better way to serve organ meats than smothered in salsa and enveloped between tortillas. Though I prefer to eat offal dishes that do not disguise the nature of the innards, I sympathize with the common sentiment that organ meats are easier to take when they're cut up and served with distractions on the plate. Tortillas are an ideal vehicle for a beginner's enjoyment of offal, because what doesn't taste good when it's served with salsa, crema, and tomatillo sauce?

Tacos with head meat, tongue, and brains are all delicious, but if I had to live with just one taco filling, it'd be pork stomach. Pork stomach is less spongy in texture than beef tripe, which, even well-stewed, takes a while to masticate. Pork stomach, on the other hand, breaks down during cooking so that it's tender and only slightly chewy. Both beef tripe and pork stomach share the distinctive taste of digestive organs; the former, which comes prepped at the store, has already been cleaned and parboiled. I've only ever seen pork stomach sold at Chinese and Mexican markets, where the organs are usually piled in a bin and sold in whole form.

Even a stomach from a fresh pig will be feral in taste and smell. To tame the odor, launder the whole and raw stomach in a mixture of water and distilled white vinegar. Use a back-and-forth scrubbing motion, as you would for an old shirt. Do this twice; then parboil the stomach for a few minutes in boiling water. This preliminary preparation is essential when cooking pork stomach, which would otherwise be too pungent.

I ate my first tacos de buche at a Mexican restaurant, not far from where I lived in southern California. (Buche is the term used for pork stomach; tripa is beef tripe.) The restaurant was a common lunch joint but on the weeknights and weekends, it was never more than a third full. Though the restaurant was often empty, there was never a sense of desolation about the place. Sometimes struggling mom-and-pop shops betray desperation; the air is heavy with it, so that by walking through the door you commit to eating at the establishment. Even as you're standing and reading the menu, you already know that you'll be eating there. To turn around and walk out the door would be to commit a slight that transcends the norms for dining out and touches something that's more akin to common decency.

This was not one of those places. Going into the empty shop was always like returning to an old friend's house. You'd order right when you walked into the restaurant. The counter would be manned by either one of the proprietor's two children, who couldn't have been more different from one another. Though the boy was already in high school, he never seemed comfortable working the cash register. He struggled with taking down orders, yet was always friendly and eager to help. His sister, a small and slight thing who couldn't have been older than twelve, punched our orders into the register as if it were second nature. She kept by the register an assortment of textbooks from which she'd study when the shop was empty. She could always be counted on for a solid recommendation for what was good to eat, and possessed an intuitive sense of whether or not a customer was looking for a safe choice like carnitas or quesadillas, or a more adventurous option from the menu.

The kitchen was directly behind the counter. It was narrow and completely open to the customer's view. The father, cheerful and welcoming, was the cook for the entire restaurant. It was rare to find another person behind the stove. He'd have his pre-prepped items, like chiles rellenos and tamales, tucked away to be warmed and charred at a moment's notice. Taco fillings were stewed beforehand, then browned on the griddle before serving. A reserved and demure woman, the mother was the only waitress we ever saw at the restaurant. Immediately after we were seated, she would arrive at the table laden with tortilla chips and fresh salsa. Minutes later, the tacos would arrive, served with a double layer of thin, pliable, and perfectly warmed corn tortillas.

"After I finished my stomach taco I walked to the counter to order another one, and then another."

The first time I tasted a taco de buche at the establishment, I was won over by the taste of the stomach: a little spicy with just the right hint of offal flavor, and something else laden with umami flavor—perhaps a touch of Worcestershire or soy sauce. After I finished my stomach taco I walked to the counter to order another one, and then another.

It's often said that great cooking is a marriage of impeccable ingredients and careful technique but at most ethnic ventures, cooks only possess mastery over the latter. It was this sense in which the restaurant was quietly extraordinary. The seafood soup was made with tilapia and catfish, yet the pieces of fish were simmered until just cooked through. The tomatoes were sometimes watery but they were always fresh so that the salsa, carefully salted and chopped to just the right consistency, was a pleasure to eat.

This was the type of eating that I did in Los Angeles, in Mexican, Korean, and Chinese joints where a term like "artisanal" would never be used to describe the cooking. Food without frills or garnishes, served on chipped plates and formica tables under flickering florescent lights. It was this kind of eating that made me the most homesick when I moved across the country last year, far away from the carefully chosen, frequently visited ethnic joints that shaped my palate in California.

Only offal helped with the longing for familiar foods. Cooking for friends each week made all the difference. Last week, I served to my Serious Eats family the offal dishes that I'd developed during my time writing this column: beef and pork neck, braised in a New Mexican adobo sauce; lamb's tongue and head meat, simmered in stock; grilled pork trotters, chopped up and recrisped in the pan; and finally, my beloved pork stomach. We gathered around the table and composed our own tacos, taking a bit of mole, tomatillo sauce, and salsa as it suited our wants. It was right and fitting to serve all the offal to my editors, who've made New York City, so far from California, home to my pots, pans, and my heart.

For serving and garnishing: 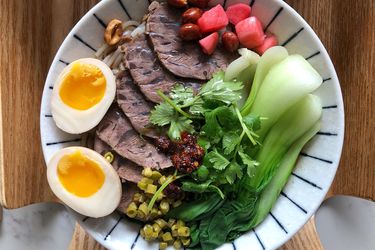 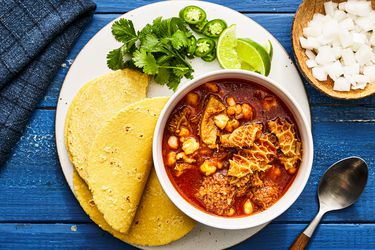 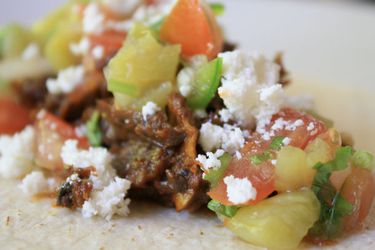 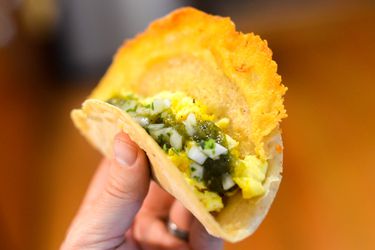