Anyone know that old-timey jazz song that goes, "Give me a pig's foot, and a bottle of beer..."? That pretty much sums up my outlook on a lot things in life.

A pig's foot is so well-composed. Think about all those little bones in the foot and all that cartilage in the joints. Not to mention the tendons and the meat, and everything bundled up in skin.

I think of each foot as a curated package of pig, an indispensable tool in the cook's arsenal. In fact, I wrap my trotters individually in plastic wrap to keep in my freezer. That way, I'm never more than a pig's foot away from the perfect soup or stew.

When Kenji and I were talking about trotters, he mentioned that pig's feet have a mild flavor profile, which means that they could (and should) go into other kinds of animal broths as well.

It was a simple suggestion, but of course it made me wonder why I hadn't thought of it myself.

Now I add a trotter to the pot when I'm making chicken soup, or menudo, or anything else hot and soupy. It's a hassle-free way to boost the body and flavor of the soup. (You also also eat the trotter once the soup is done.)

Trotter gear
Coined and made a "thing" by Fergus Henderson, trotter gear is stock made from trotters simmered in water.

Trotter gear is so gelatinous when refrigerated that it looks more like a rubber eraser than meat stock. It's a boon to have in the kitchen. You can use it to finish sauces, risottos, and pasta dishes. You can add it to soups and stews, which seems to me so much easier than lugging home store-bought broth out of the box or can. That stuff is heavy.

Of course, if you get into the habit of tossing trotters into your soup, you won't need the additional boost of trotter gear, but it's a nice thing to have around either way.

Get the recipe for trotter gear here » 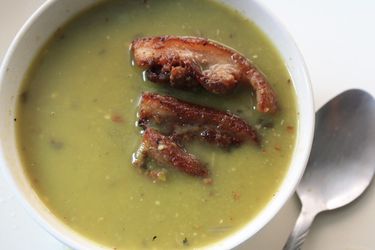