One of the items on my eating bucket list is the live octopus at Korean restaurants that is cut into pieces and served as-is, with a spicy chili sauce that barely distracts from the fact that the octopus is still wriggling and moving as you swallow. Or so I am told by friends who have eaten the dish. The more lurid tales of the dish involve the way in which the tentacles stick to the gullet on the way down.

In the meantime, I content myself with cooked octopus. The amount of time you want to be cooking small octopuses (the plural being either octopuses or octopodes, as octopi is actually a false derivation from the original Latin) is fairly brief—searing or grilling quickly is ideal. Yet cooking transforms what I can only imagine to be a gelatinous raw treat into something much meatier, something you can really sink your teeth into.

I have friends, and perhaps you do too, who think nothing of tending to a pork loin or roasting a chicken, but shy away from cooking cephalopods of any kind. This strikes me as odd, for in terms of difficulty of cooking and time expenditure, a quick searing of octopuses, which can then be dressed in any number of oil-and-vinegar-type dressings, takes no time at all.

There are of course many anatomical differences between the octopus and the squid, both of which are eight-tentacled cephalopods, but the most noticeable difference is the shape of the head. The head of an octopus is round; the head of a squid is pointy and often possesses a set of fins. Other than that, you may quickly sear or grill or batter and deep-fry both animals.

If your octopuses are small enough and your pan is hot enough, you can keep the bodies whole, but I usually slice up the head and the tentacles to prevent overcooking. The head of a small octopus is not a very substantial thing—it's a balloon-like casing—thin and less flavorful than the tentacles if only because it is so insubstantial, but it doesn't hurt to have them in your frying pan and on your plate.

I keep coming back to the same preparation. It is a simple dressing: olive oil, lemon, minced garlic, capers, and herbs. It can be a small but filling appetizer at the table, or you can bulk it up to a main dish by adding greens and olives. Once dressed, the octopus will keep in your fridge for a day or two, making it good option for a make-ahead meal. 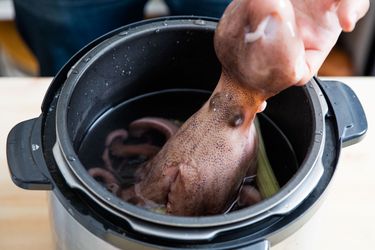 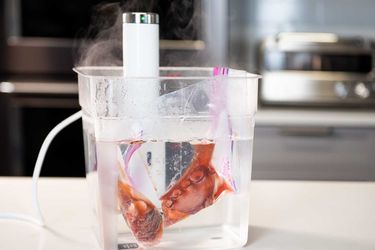 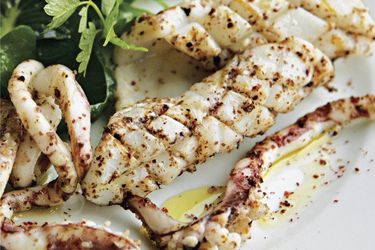