"At least we know that this duck had a really good time before he died."

Last summer I met Ben Shaw, a farmer at the Union Square Greenmarket who sold me a duck. The Muscovy duck was in fact the farmer's sire duck—one of the uber-male ducks on the farm from whose fertile loins sprang the rest of the population.

When Ben asked me if I wanted one or both of them, I jumped at his offer. I wanted more exposure to the Muscovy breed—plus, the idea that I was going to be getting the sire duck rather than any old Muscovy duck was like the culinary equivalent of going to the sperm bank to have your pick of everything.

I lugged home the sire duck—a ten-pounder that, per my request, came with all the fixins'—head, feet, and internal organs. When I got home, I sauteed the liver for a hearty snack and tried to think about what to do with my Muscovy. In the heat of July, the air-conditioning in my apartment was pitifully weak.

In the end, I did what I always do when I'm plagued with doubt and indecision. I took apart the bird and confited it. With the exception of the breasts, I confited everything, and I mean everything: the legs, the wings, the gizzards, the heart, the feet, and even the duck's head, which Ben had thrown in for good measure. Because the duck was a large one to begin with, and because Ben had also supplied me with many pounds of gizzards that I also wanted to confit, I had to use my largest pot to accommodate everything. Filled almost to the brim with fat and duck parts, the pot weighed well over twenty pounds.

Thus it was with a sense of having really accomplished something that I heaved the pot into the refrigerator for ageing. My intention was to let the confit rest for about a month, but one thing led to another, and half a year later, that pot was still in my fridge with its parts intact. It weighed down on me, that giant pot of duck fat and lard filled with duck parts numbering in the high thirties (that is, if you counted all the gizzards individually). The more I thought about it, the more frustrated I became, knowing that breaking into the pot would be time-consuming even if the results were going to be delicious.

So one of my New Year's resolutions was: get rid of that giant pot of fat with the confit.

Finally, this past week, I placed the pot in the oven; it took about an hour for such a large, solidified mass of fat and meat to melt. I dove into the pot with a pair of chopsticks to find two legs and two wings. I had to fish my way through those countless gizzards. I plucked out the duck feet and tossed them into a white bean and kale stew I was making. I found one pig's tail that must have wandered into the pot by accident. Standing over that pot mired in liquid lard and duck fat, I made another New Year's resolution: when confiting, organize your duck parts into manageable jars because otherwise that confit will never get eaten.

Finally I found the legs and wings and set them aside for the dinner I was cooking with former Slice Intern Aaron Mattis (the little brother of one of my best friends in school). Now he is taller than me, smarter than me, knows more about pizza than I probably ever will. Together we made cassoulet, deconstructed, with my confited Muscovy.

Browned in a cast iron skillet, the duck skin was crispy and the meat was duckier than most ducks I've tasted. We were as happy eating the Muscovy as it must have been playing the role of stud duck on the farm, at least according to Aaron, who said, "At least we know that this duck had a really good time before he died."

Now the only thing left in the pot is a few pounds of confited gizzards, which I sincerely plan to eat in the near future. Happy New Year, Nasty Bits lovers. May your year be filled with animal parts. May those parts be eaten in a timely and delicious fashion. 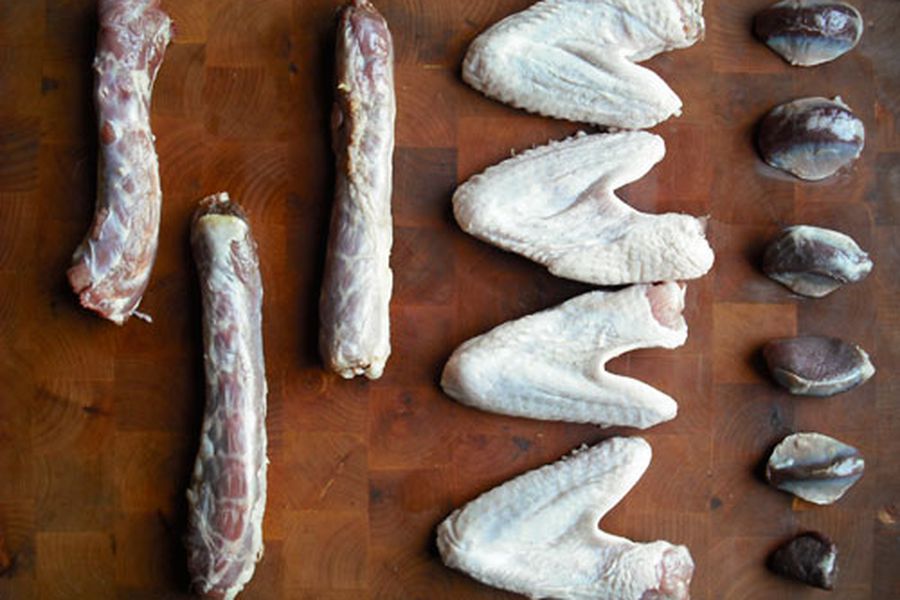 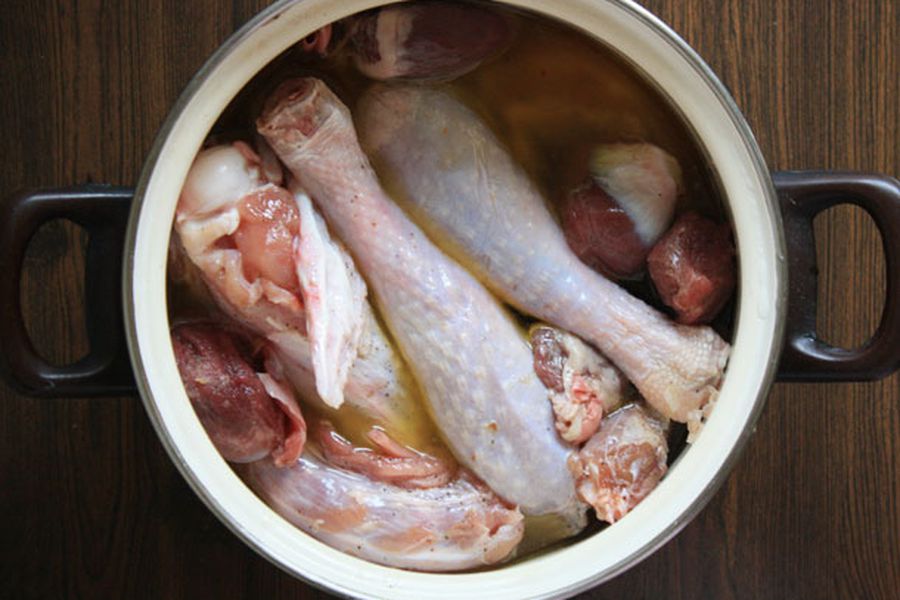 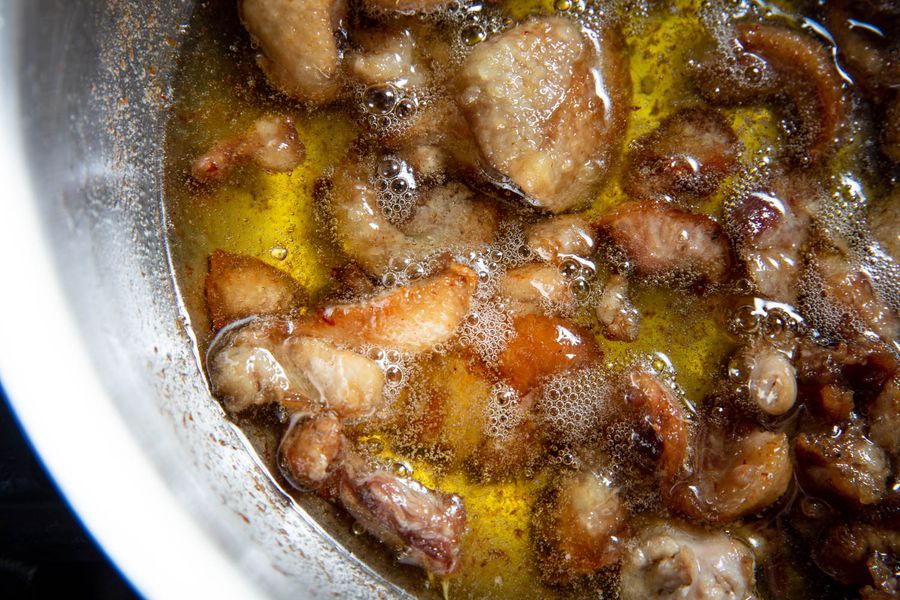 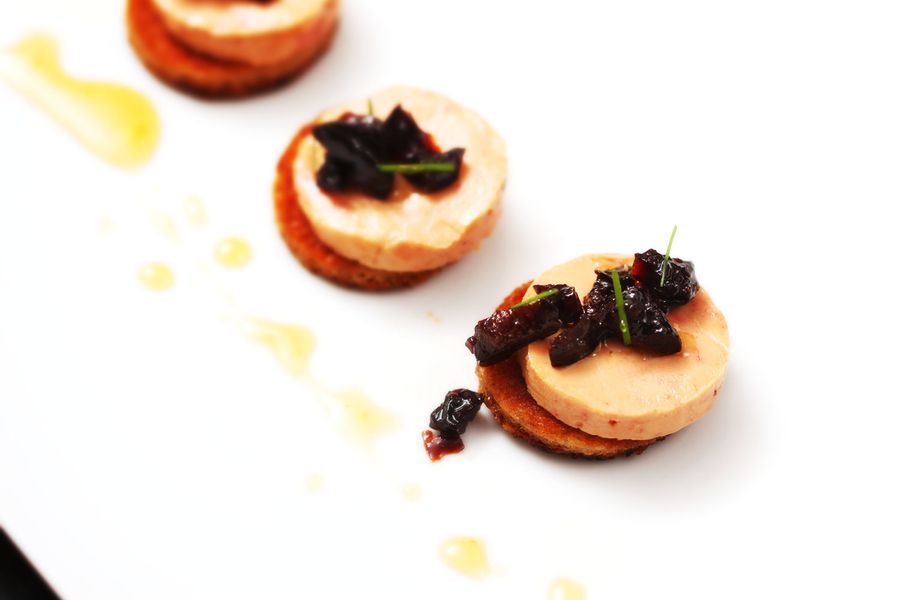 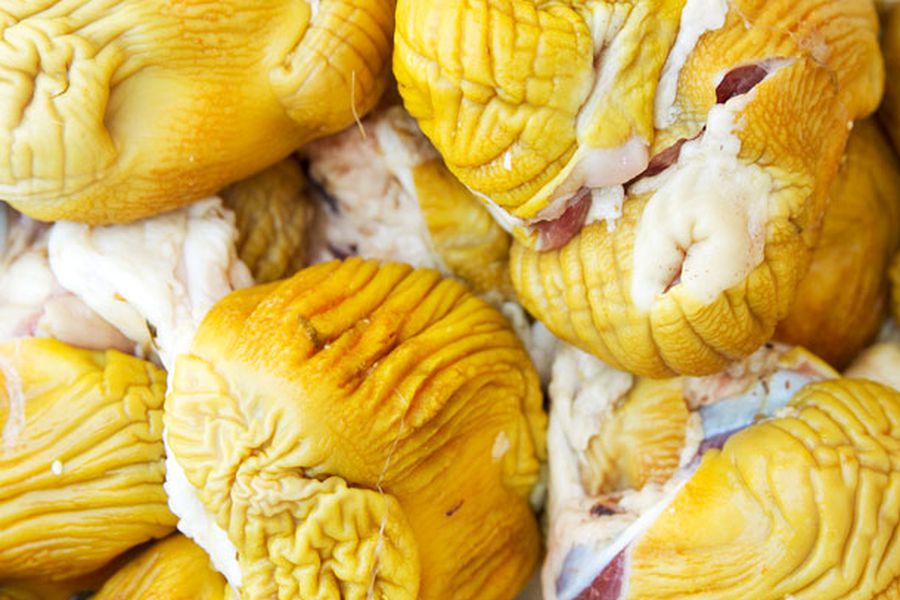 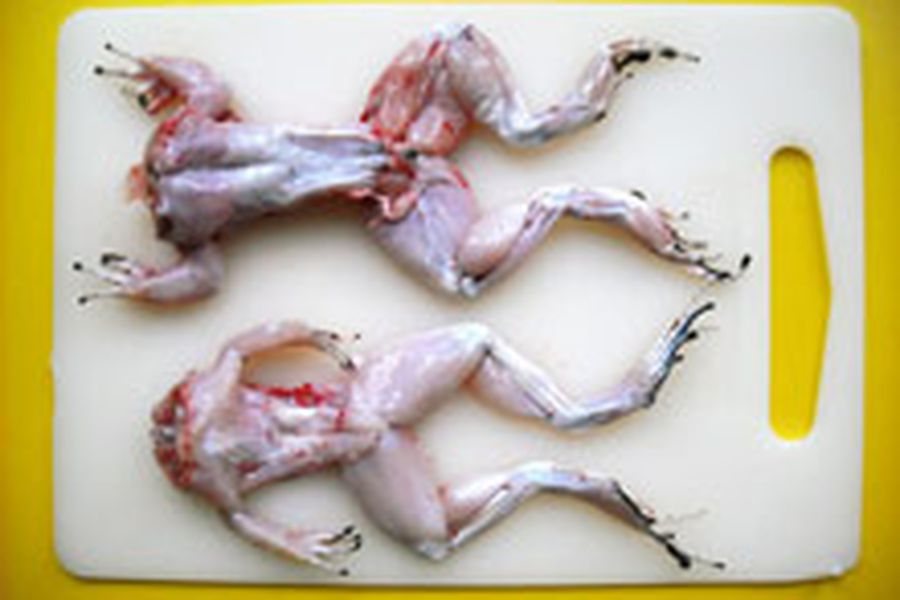 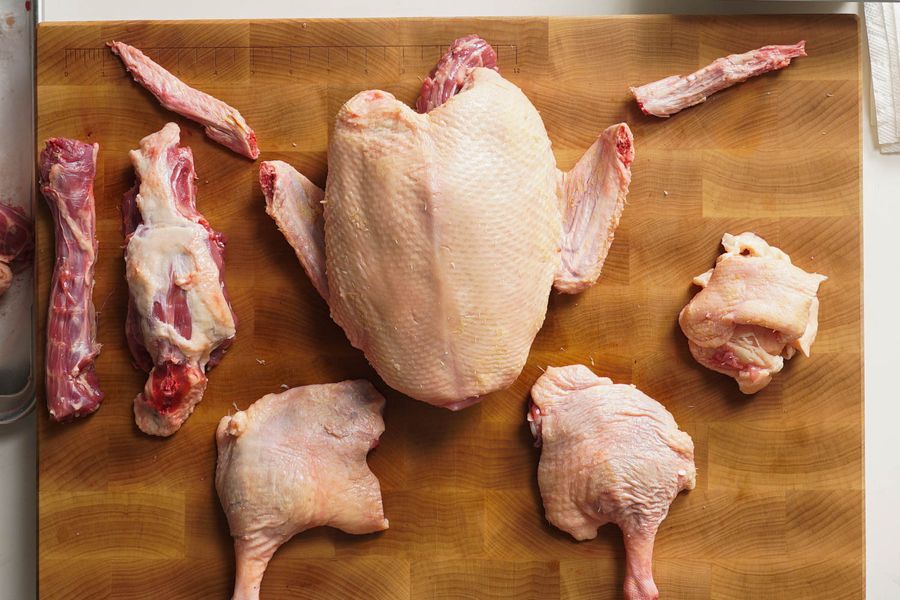 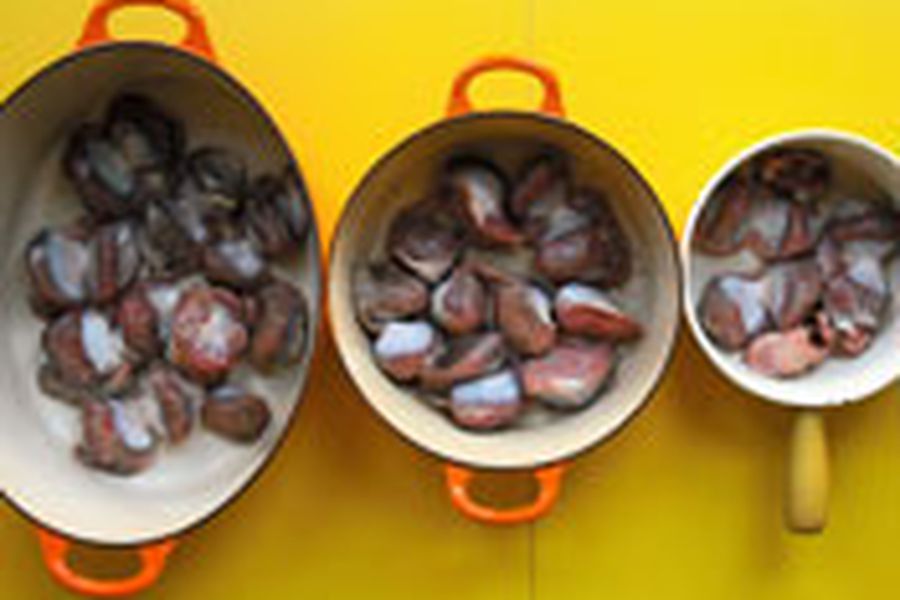 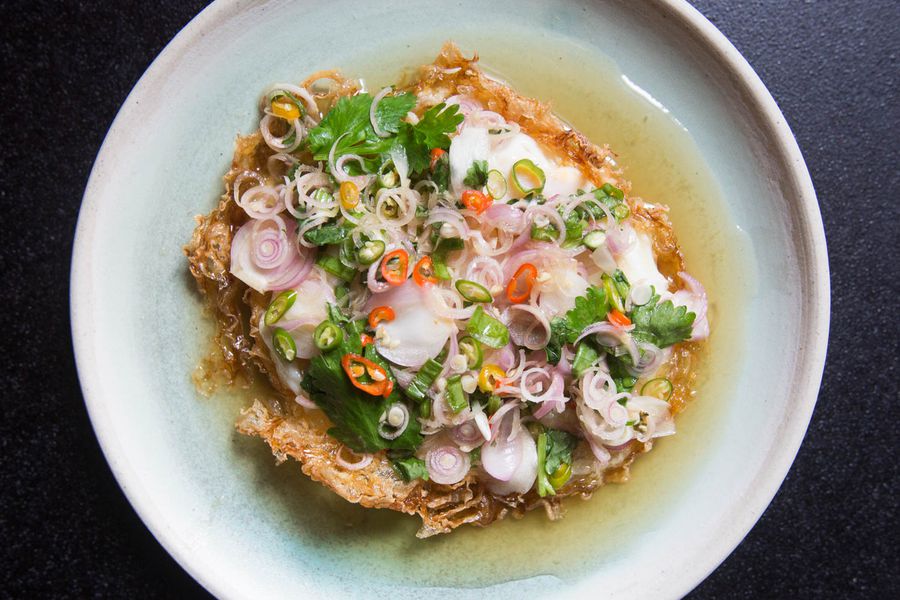 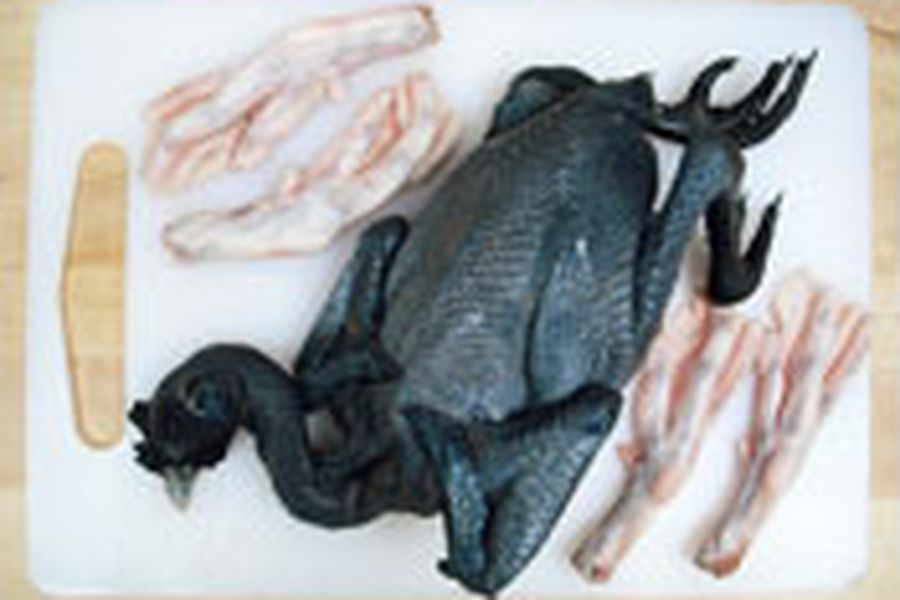 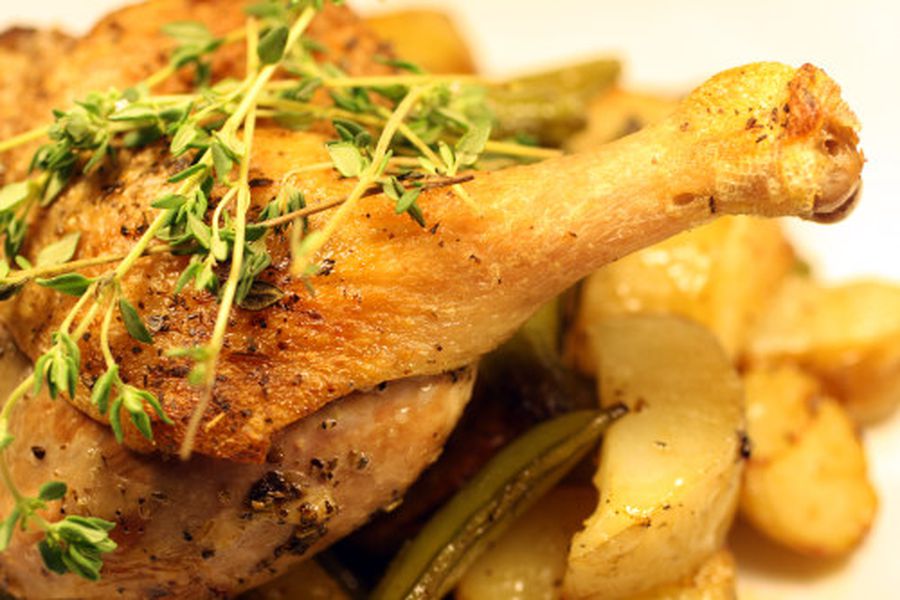 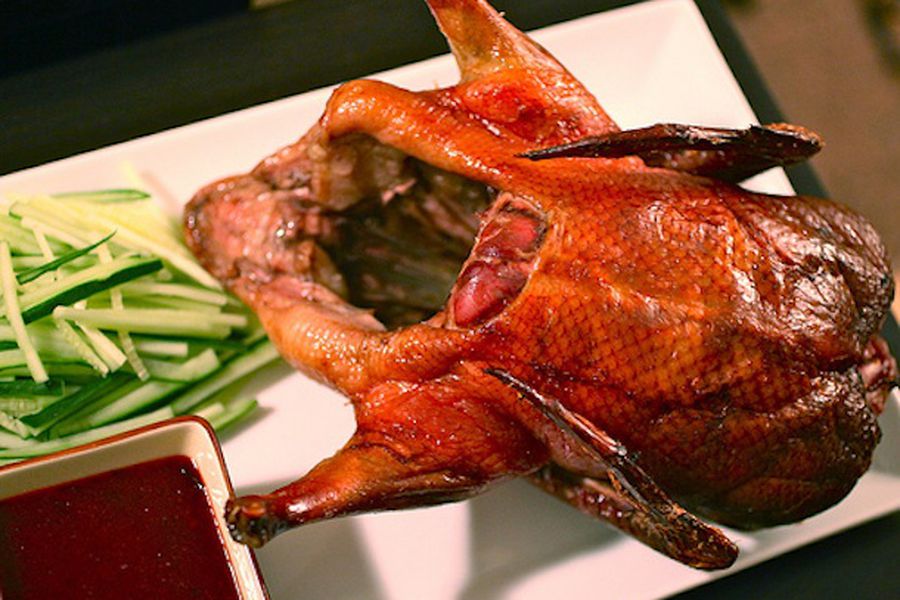 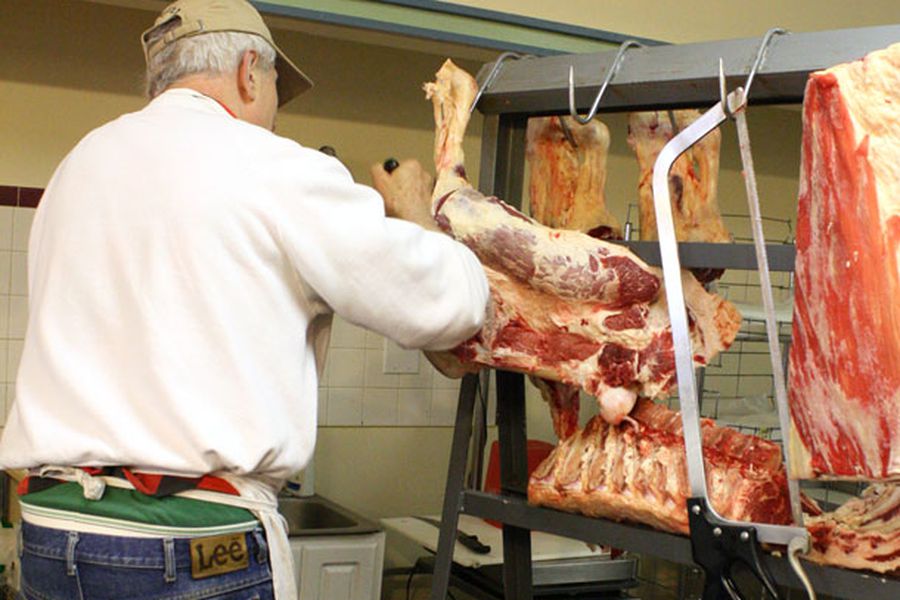 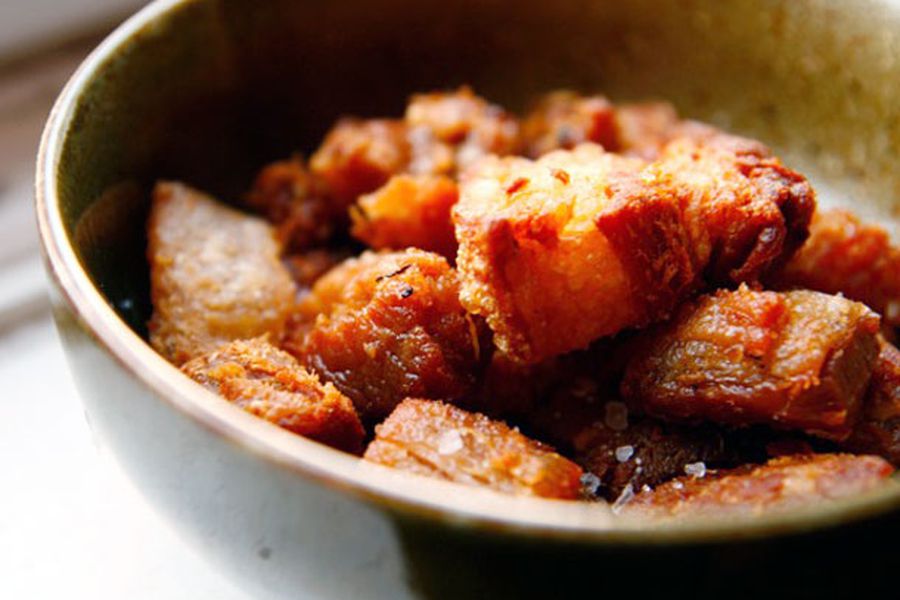 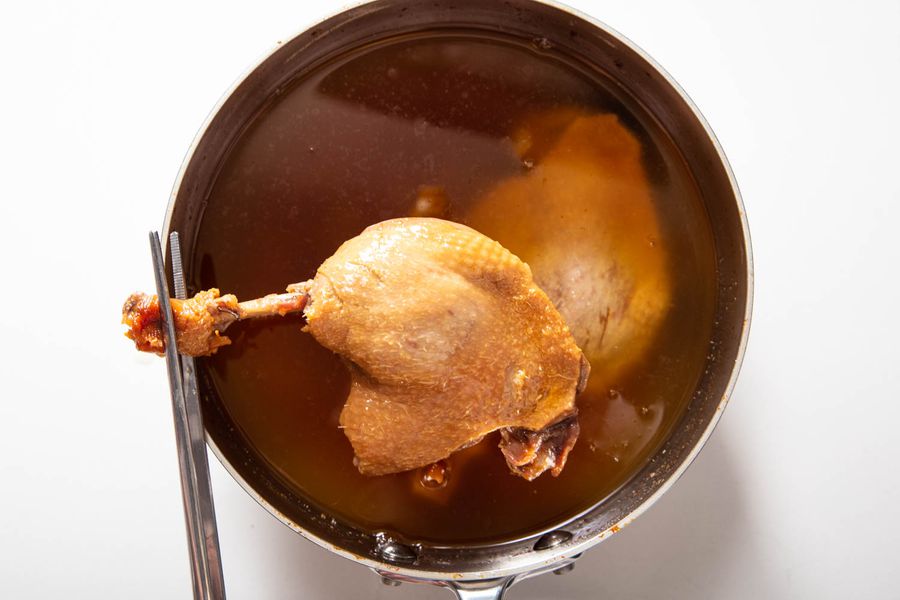